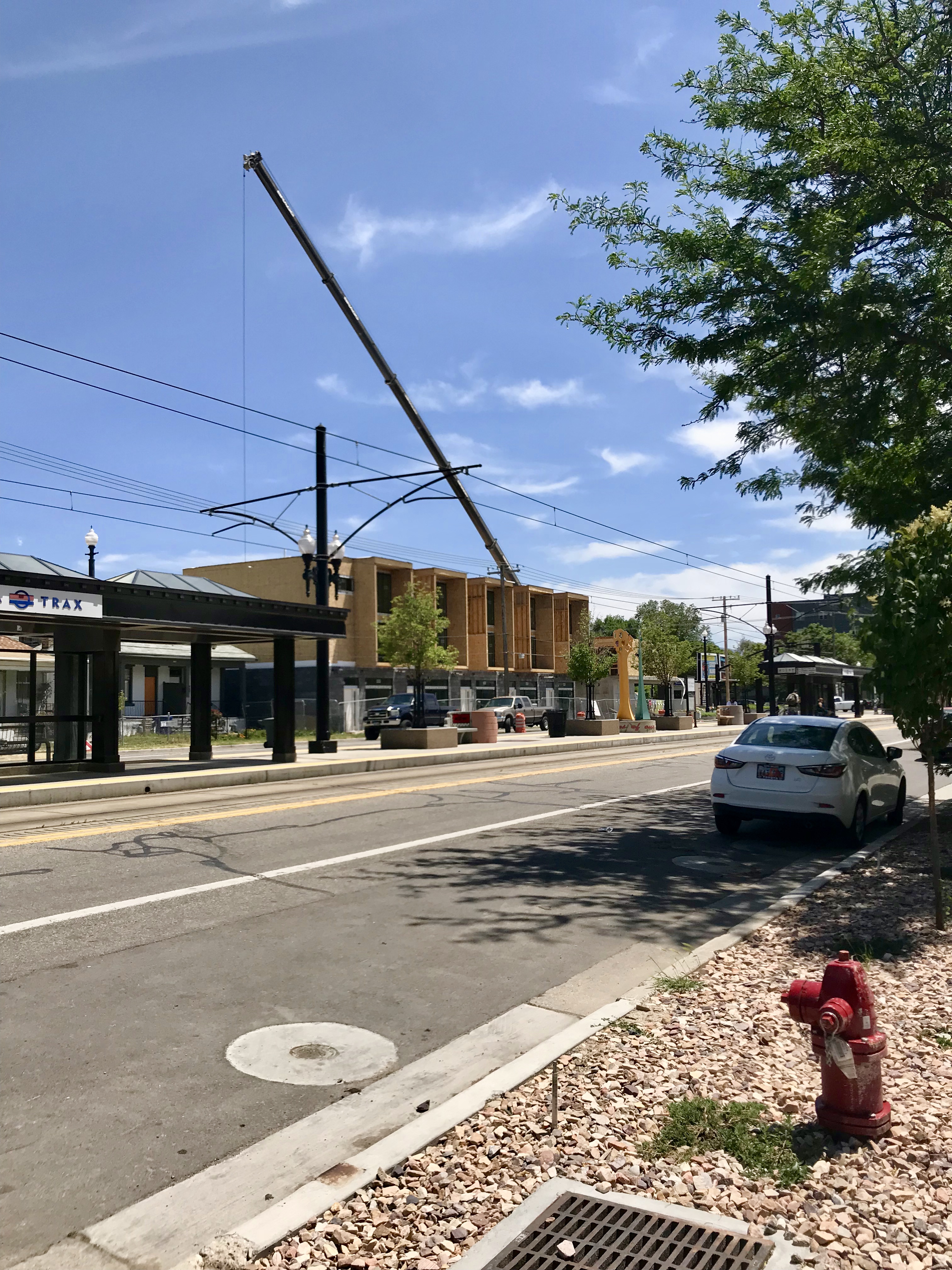 Construction continues unabated in the Central Ninth neighborhood.  Two larger projects, the Alinéa Lofts and the C9 Flats are now well into the construction process.  A new townhouse development, The Ruth, a mixed-use project at 800 South and 300 West is partially framed out.  And the SLC Youth Hostel is making slow progress.

In addition, several previously reported projects are now complete, including The Ruby townhomes, the 200 West Apartments, Central Ninth Place townhomes, and the historic home restoration as part of the Jefferson Walkway project.

The Alinéa Lofts are only partially framed-out yet according to a sign at the project site, the units are sold out.  The project by LandForge, Inc. and will have 24 for sale units and ground floor retail fronting 900 South.  The project is directly east of the 900 South TRAX station.

One of the largest developments in the Central Ninth neighborhood, the C9 Flats are also just about framed out.  The Sojourn SLC project consists of two six-story buildings with 97 apartments.

The Ruth, a townhome project by CW Urban is actively under construction on the southeast corner of 800 South and 300 West.  The project includes 17 townhomes in four buildings and a 3,000 square foot commercial building on the corner.

The SLC Hostel on the southeast corner of 800 South and Jefferson Street is making some progress.  Windows and doors have gone in since the last update in February.

Another CW Urban project, The Ruby townhouse project is completed.  The project consists of 12 townhomes in four 3-unit buildings just south of 800 South on West Temple. Six units face West Temple and the other six face the alley between West Temple and Jefferson Avenue.

The 200 West Apartments by Knowlton General are now leasing.  The project contains 50 one-bedroom apartments on the east side of the 900 South block of 200 West.

The Central Ninth Place is a four-building, thirteen unit for rent townhome project.  It was recently completed on the west side of the 900 South block of Washington Avenue.  The unadorned townhouses are about a block from the 900 South TRAX station and include no off-street parking.

The new units of the Jefferson Walkway project have been built and already sold.  The previously remaining outstanding element of the project, renovation of the relocated historic home has also now been completed.  An Accessory Dwelling Unit has been constructed over a garage accessing the alleyway behind the historic home.