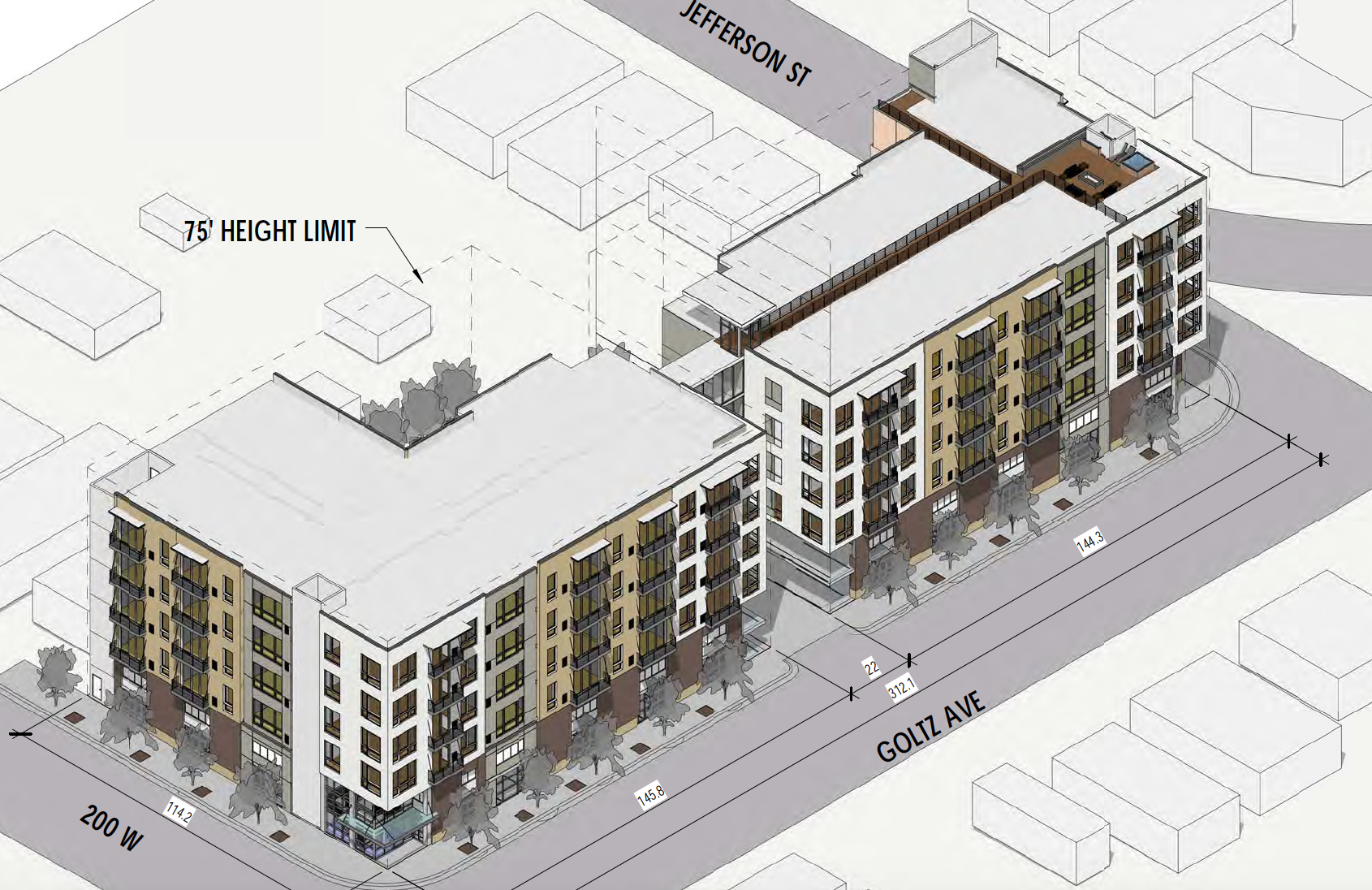 The Central Ninth neighborhood is in the midst of a building boom.  Preliminary construction work has started on the C9 Flats,  a large residential development, at the intersection of Goltz Avenue and Jefferson Street.

The project consists of two six-story buildings, with 53 and 44 market rate units respectively, and required approval from both the Salt Lake City Planning Commission and City Council because the developers, Sojourn SLC, will connect to the two buildings with a sky bridge over an alleyway.  The sky bridge required the developers to purchase the air rights above the alleyway, which city council approved last year.  The project’s site is unique because the alleyway bisects a single parcel.  Although the street is part of the property, it will remain a public street for residents that live in the single-family homes to the north of the project.

The development will occupy the entire southern stretch of the block between 200 West and Jefferson Avenue on Goltz Avenue with four floors of residential above a two-story parking podium.  The project will be tall compared to its neighbors.  The developers will maximize building height building right up to the 75-foot threshold allowed under the project’s R-MU (Residential Mixed Use District) zone.

Developers originally proposed to have 151 parking stalls with a 1.4:1 parking ratio and 106 units despite the fact that the project is less than two blocks from the 900 South TRAX Station and the majority of units will be one-bedroom apartments with a few studios and two-bedroom units.  Although the developers have reduced the unit count to 97 instead of the original 106, it is unclear if the number of parking stalls will be reduced as well since the footprint of the podium remains unchanged in both the original and current plans.

The residential units will occupy floors three to six while the first two floors will be reserved solely for parking.  According to the most recent renderings and site plans available, the developers do not appear to include active uses on the ground floor, with residential amenities planned, including an outdoor courtyard be included on the third floor and rooftop level away from street view on the north side of the building.

The C9 Flats project is one of six multifamily developments under construction in the Central Ninth neighborhood.  On the same block as C9 Flats is the 1015 South Apartments, a four-story 54 unit project fronting 200 West.  The 1015 South Apartments will include 11 income-restricted units for residents earning at least 50 percent AMI (Area Median Income).

A block to the north, three residential projects are under construction including a currently unnamed 50-unit project directly north of the freeway onramp on 200 West and two townhome projects on Washington Street, Central Ninth Place and the Washington Street Townhomes, will add almost 70 units to the neighborhood.

Just two blocks to the north of C9 Flats are the Jefferson Walkway and Greenprint Apartments. Construction is underway on both projects, a seven-unit cottage home development and a 60-unit microunit development respectively on the 800 South block of 200 West.

Construction is also underway on the largest of the current slate of Central Ninth projects, the Moda Granary Place, a five-story 134 residential units development at the northeast corner of the 300 West and 700 South intersection.  The project is on the border of Central Ninth and the Granary District and will be entirely income-restricted with mix of 20 studios, 70 one bedroom units and 44 two bedroom units reserved for residents earning up to 60 percent of the AMI (Area Median Income, currently set at $30,350 for a household of one and $34,680 for a two-person household).