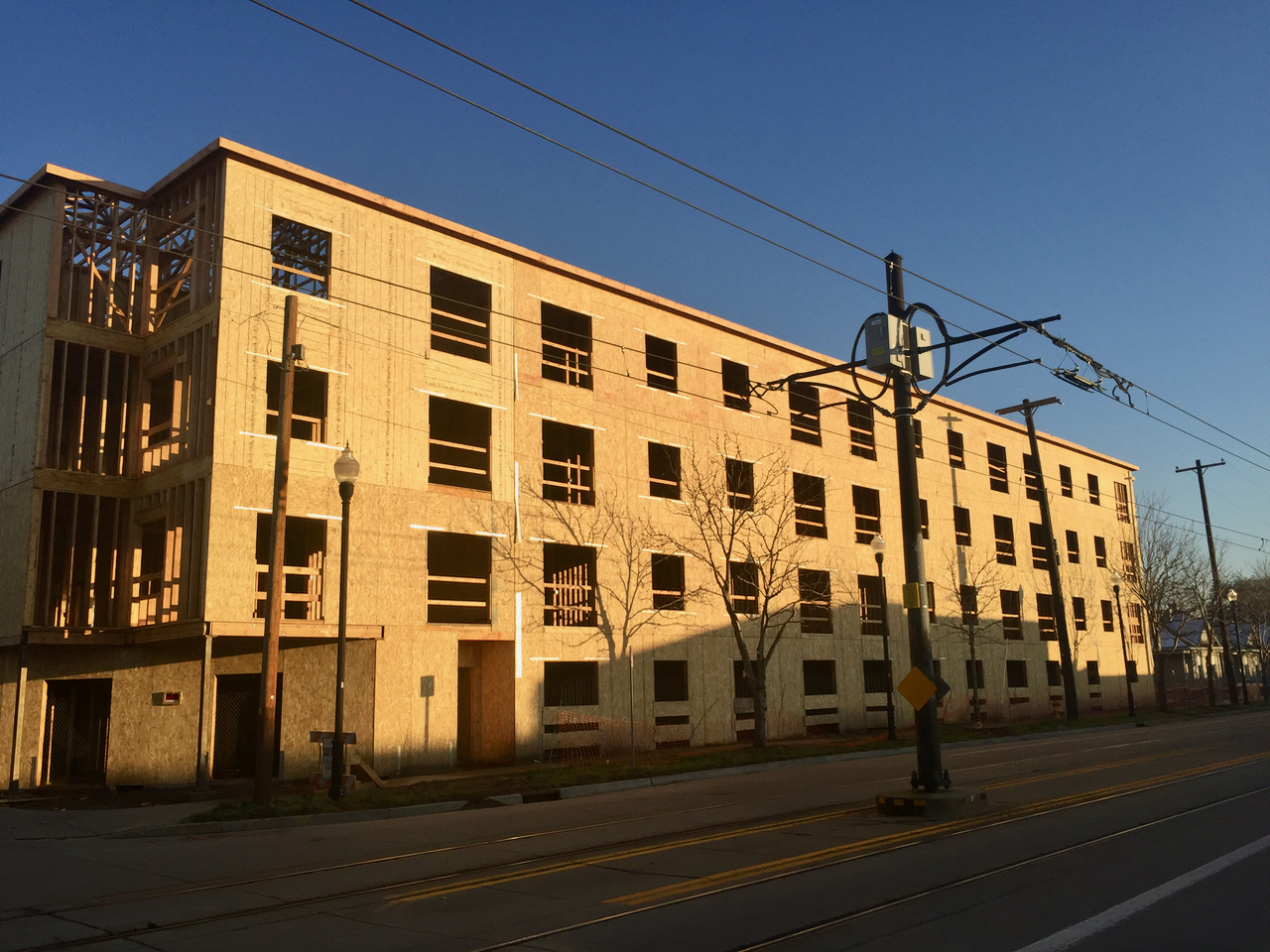 The next wave of development in underway in the Central Ninth neighborhood.  There are currently six developments under construction within two blocks of 900 South TRAX station on 200 West.

Because none of these developments include structured parking, construction has progressed rather quickly.  Framing has started on three of the projects: the Jefferson Walkway, Greenprint Apartments and 1015 South Apartments.  The three projects combined will add 92 new residential units to the Central Ninth neighborhood.

The largest of the three, 1015 South Apartments, is almost completely framed out.  The 1015 South project, on the 1000 South block of 200 West, is four-stories tall and will have 54 residential units, an office and fitness center.  The project will be mixed-income, with 11 units reserved for residents earning at least 50 percent AMI (Area Median Income).  The remaining 43 units will be market rate with 39 one-bedroom units and 15 studio apartments.  The project is built right up to the property line on both 200 West and Mead Avenue with surface parking tucked behind the building.

The first phase of the Greenprint Apartments, on the 800 South block of 200 West, is framed up to the second of four proposed floors.  The first phase will consist of 30 micro-studio apartments.  The units will be between 250 and 350 square feet.  The project is directly west of the 900 South TRAX station and will not include car parking spaces, but instead will include ample bike parking.  The second phase will replace the single family detached home directly north of the first phase building.

Directly across the street from the Greenprint Apartments is the Jefferson Walkway, a seven for-sale, cottage home development.  Framing has started on two of six new construction cottage homes.  The seventh home is an existing historic home that was physically relocated a few yards to the south and will include a rear accessory dwelling unit above a car garage.  The majority of the cottage homes will front a pedestrian walkway that connects Jefferson Street to 200 West and the 900 South TRAX station.

Construction recently started on two residential townhome projects on the 900 South of Washington Street.  Framing for those two projects should start in the next month.

*Click the numbers below to continue on to the next page to view images of the Greenprint Apartments and  Jefferson Walkway.