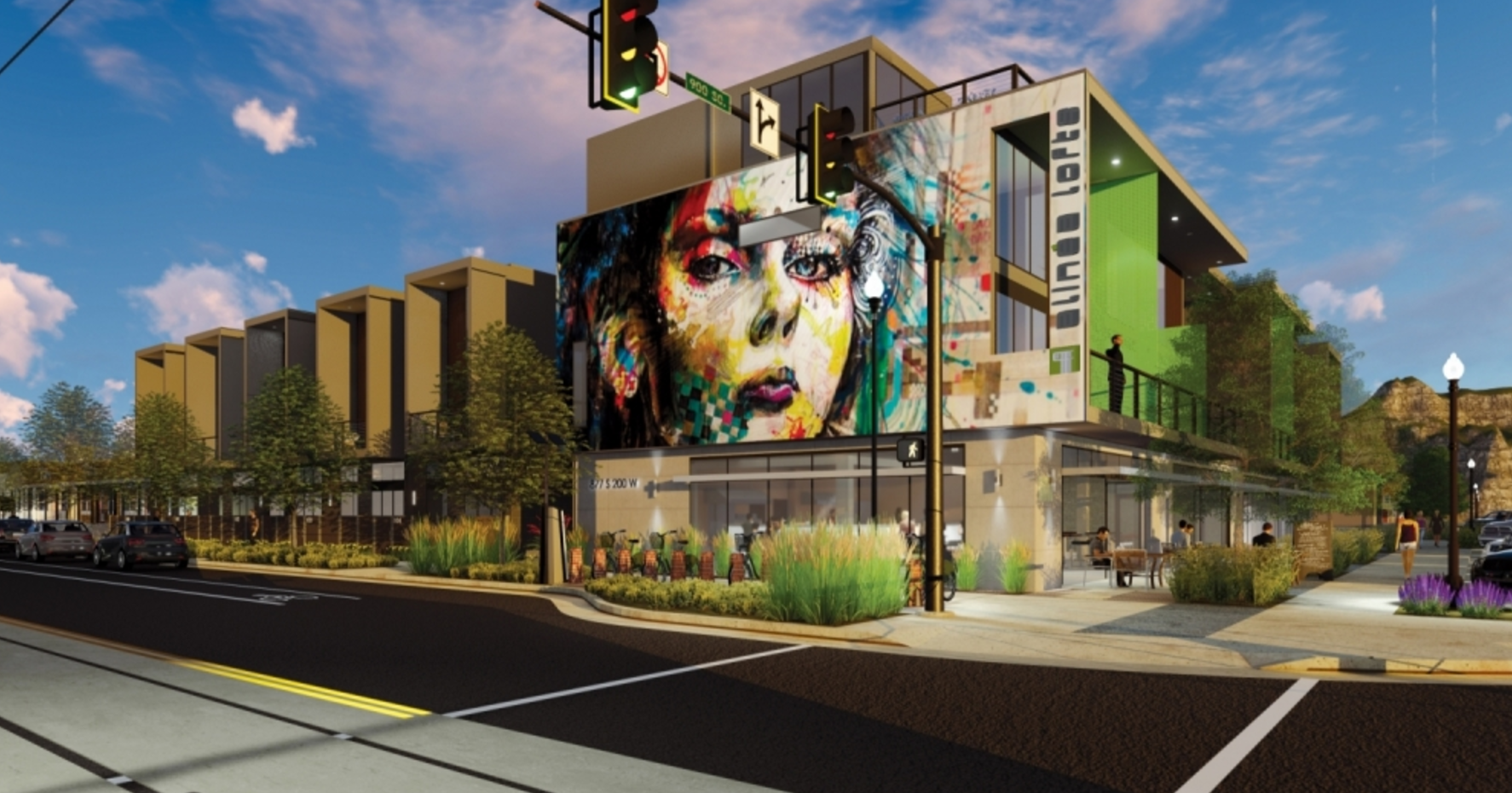 A prominent building in the Central Ninth neighborhood is no more.  The large green warehouse-style building that for years was the home of Local First, a nonprofit that advocates for local businesses, has been demolished to make way for the Alinéa Lofts, a mixed-use development by LandForge Inc.

Last May, the Salt Lake City Planning Commission approved zoning modifications for the Alinéa Lofts. Because the townhomes are part of a larger multifamily development, the developers requested a zoning exception needed to allow garage access on an adjacent alley that is typically not allowed for multifamily projects.  The commission approval will allow the developers to have five two-car garages front the alley directly east of the development.

The project consists of three separate buildings surrounding a terrace courtyard and a parking structure.  Only five townhomes fronting 200 West and the retail along 900 South will have entrances fronting the street.  Most of the units will be accessed from the terrace courtyard that will cover the parking structure.  Parking will be available for both commercial and residential tenants and will be accessed from the alley.

The courtyard will have an entrance on 200 West between the townhomes and the mixed-use building.

The site was originally owned by the Redevelopment Agency of Salt Lake.  Salt Lake City Council members, acting as the RDA Board of Directors, previously approved a term sheet that will allow the developers to purchase the land through a payment deferment of three-fourths of the purchase price until completed units sell.

According to planning documents, the commercial space will be designed to be adaptable in size depending on tenant needs.  Individually the spaces will be 400 to 600 square feet, but tenants can combine spaces.  As with the nearby Central Ninth Market, the commercial spaces are intended for local businesses.

As with the Central Ninth Market, the Alinéa Lofts will feature public art.  Last year the planning commission approved an exception to materials and signage requirements that will allow the developers to build a mural on the west-facing side of the building (original renderings show the mural on the east side) and have a vertical sign identifying the building.

Developers have received the needed permits and construction of the actual structures will start shortly after demolition and groundwork are completed.

The project will be built to LEED Gold standard.

The Alinéa Lofts is one of four for-sale residential projects planned for the Central Ninth neighborhood.  Construction is nearly complete on the Jefferson Walkway project, an eight-unit cottage home development on the 800 South block of 200 West.

In March, the Salt Lake City Planning Commission unanimously approved a planned development and preliminary subdivision request for The Ruby, a 12-unit townhome project on the 800 South block of West Temple.

The fourth project is a four-unit townhome project by Atlas Architects that will be built directly behind the Central Ninth Market on 900 South and Jefferson Avenue.   Construction of the project is expected to start later this year.

Watch the video below for a virtual tour of the project.