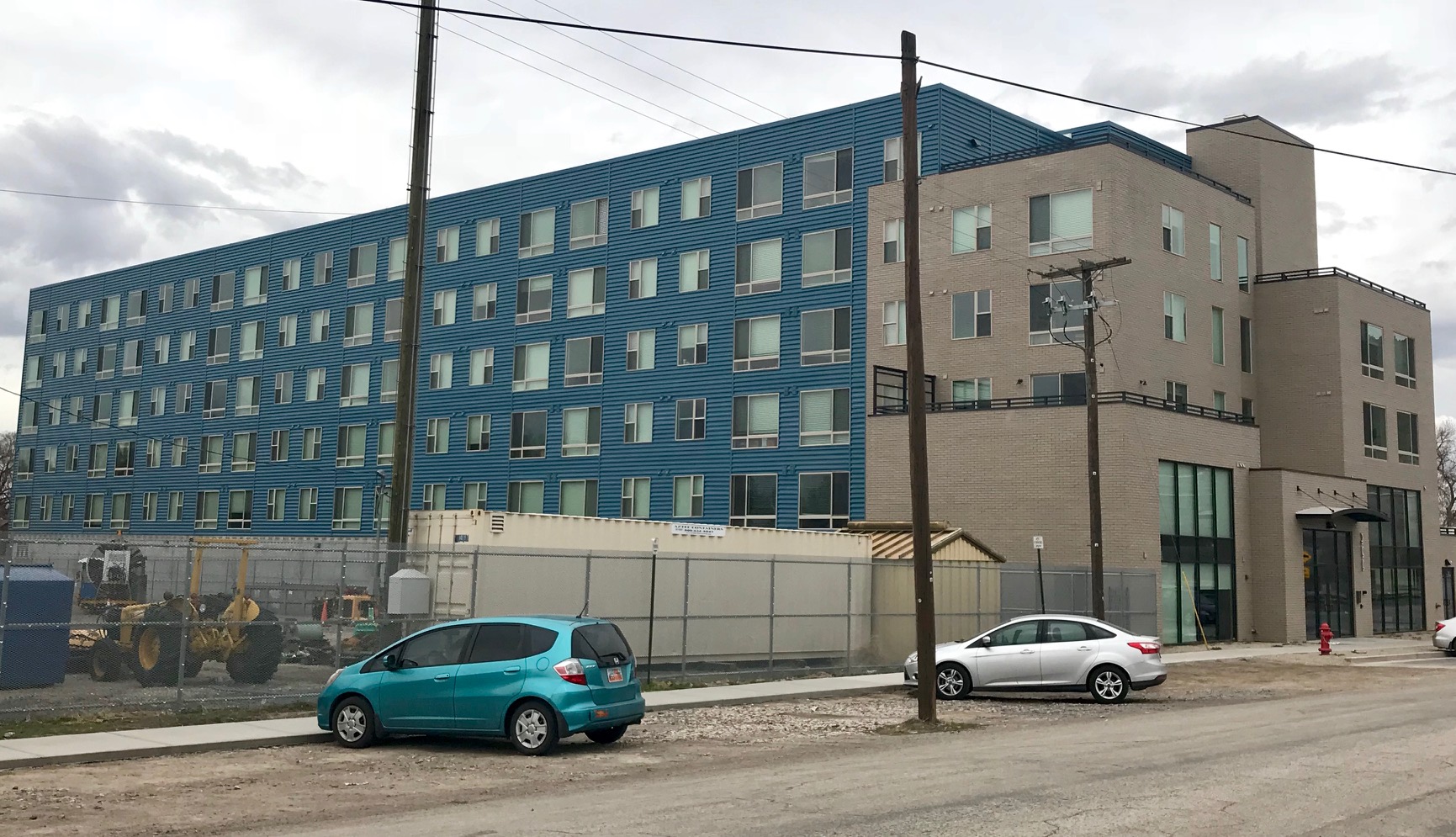 Just a few years ago the area directly north of the Guadalupe/North Temple TRAX and FrontRunner Stations was dominated by surface parking, vacant lots and light industry.  While some of those characteristics remain, since 2015 the neighborhood has been experiencing a significant transformation that shows no immediate signs of letting up as developers, Giv Group, moved forward with a proposed second phase of the Project Open Development at the 300 North block of 500 West.

Phase Two’s larger building will consist of 74 units with 65 studio, one three-bedroom, four one-bedroom and four two-bedroom apartments.  The building will have four, one-story walkup residential units with and four two-story loft units with studio/commercial flex spaces at the ground level fronting 500 West.  The one-story units will have studio/flex space separating the apartment from the sidewalk.  The lobby, mailroom and meeting room will occupy the buildings north end fronting 400 North.

The three-story building will sit directly south of a proposed clubhouse and directly west of the first phase building.  In addition to the clubhouse, amenities will include a small outdoor plaza, community garden, playground, bike repair station, dog run, gazebo, gym and conference room.

Surface parking will wrap around the larger building and a warehouse that fronts 400 North.  The surface lot will have 125 stalls, including the stalls already in use directly north of the first phase building.

Because of the project’s proximity to TRAX and FrontRunner, the developers needed to go through the Transit Station Area (TSA) Development Review process.  Under the TSA review, Giv Group earned 165 points for the five-story building and 157 points for the three-story building.  TSA guidelines require developers to earn at least 125 points to bypass a public hearing with the Planning Commission.  Developers scored high for density, including affordable housing and for energy efficiency as both buildings will run entirely on solar energy.

Including Project Open’s second phase there are 288 residential units in a development within a two block radius of the North Temple FrontRunner Station.  Those projects include the five-story Ice House Apartments proposed for the 400 West block of 300 North, the 13-unit Guadalupe Rowhouses development proposed for the 500 West block of 500 North and the redevelopment of the former Biomat Building into 22 residential units at the intersection of 600 West North Temple.

Construction is almost complete on the first phase of the Hardware Village, directly north of the TRAX station.  Hardware Village consists of two six-story buildings that will add 409 units to the neighborhood.  In all, including the 4th West Apartments that opened in 2017, when all the projects proposed and under construction are completed there will be nearly 1200 residential added since 2017.