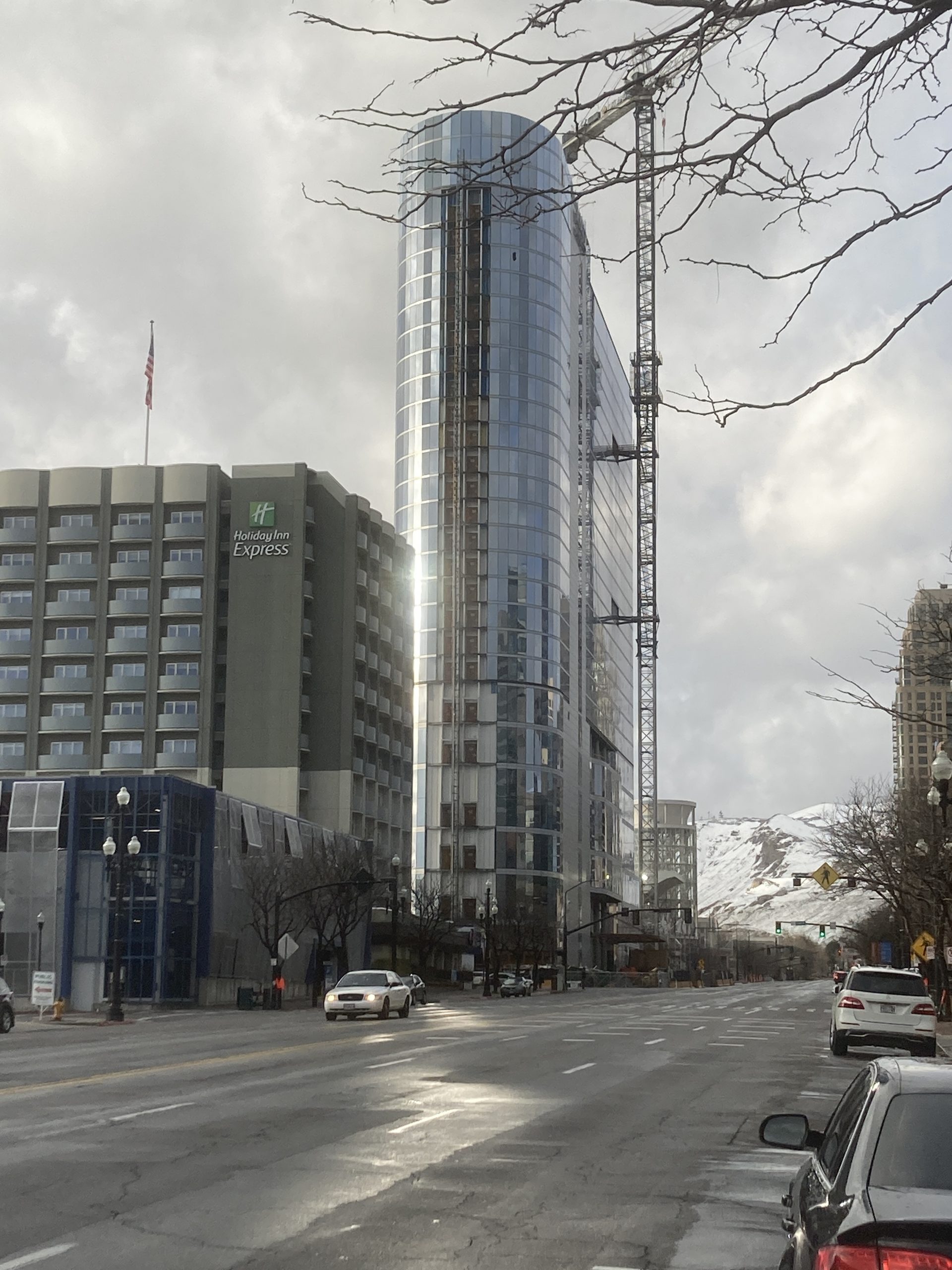 For those readers who haven’t been to Downtown Salt Lake City in a bit, we spent last week catching up with the construction progress of ongoing projects we’ve been covering. From the Depot District on 600 W and I-15, to 500 E in East Central, the flurry of activity continues.

To get more information on these projects – and feel good about reading for free an independent, local news source – become a subscriber to Building Salt Lake. For only $49/year, you’ll support smart growth and good urban design, and enjoy the site’s enhanced functions. Our new advanced Search, with spot-on filters, gets you the information you need. Along with the Project Database and Projects Map, you’ll know what’s happening in your neighborhood or desired investment location.

Here’s our photo update of Downtown projects under construction, starting from the west.

At the intersection of 600 W and 200 S, tax-credit and micro apartments are taking shape. Central Station East (center, first photo) is occupied, while its cousin to the west, on the corner, has finished its concrete podium. To the west of 600 W is property owned by UTA, north and south of 200 S. The framed building is Greenprint Gateway. North of 200 S, the CINQ and Alta Depot projects are well under way. Photos by Luke Garrott.

In the Depot District at Rio Grande St and 200 S, the site of the former Road Home emergency shelter, the Rio (dbUrban and Hamilton Partners) will offer 210 dwellings and 4000 sf of retail. Photos by Luke Garrott.

The Olive (CW Urban) fronting Pioneer Park at Broadway and 400 W, is getting its finishes. Photos by Luke Garrott.

On the block to the north, the yellow and red accents on the Paperbox Lofts means they’re getting closer to showtime. The excavation fronting 200 S is another project by ClearWater Homes, the Zephyr Lofts. Photos by Luke Garrott.

La France apartments, and ‘The Courts” cottage-style development behind, soon to be demolished, still stand west of the old Henrie’s Cleaners at 218 Broadway (300 S). A 43-unit project by Axis Architects is finishing with demolition of the former dry cleaners. Photos by Luke Garrott.

On the block to the north, The West Quarter’s first phase is really taking shape at 100 S and 300 W. Photos by Luke Garrott.

The convention center hotel, a Hyatt Regency, at 200 S and W Temple. Photos by Luke Garrott.

At 200 W and 400 S, The Revival, a 142-dwelling project by PEG Development, and Edison House social club are rising on the same block as Squatter’s Brewery. Only a block away from Pioneer Park. Photos by Luke Garrott.

Cottonwood Broadway’s 254 apartment homes have completed their stretch from 200 to 300 S just east of 300 E. Only framed on Broadway (300 S), the building’s showing its finished character to 200 S. Photos by Luke Garrott.

The Hardison at S Temple and 500 E is filling with residents. Photos by Luke Garrott.