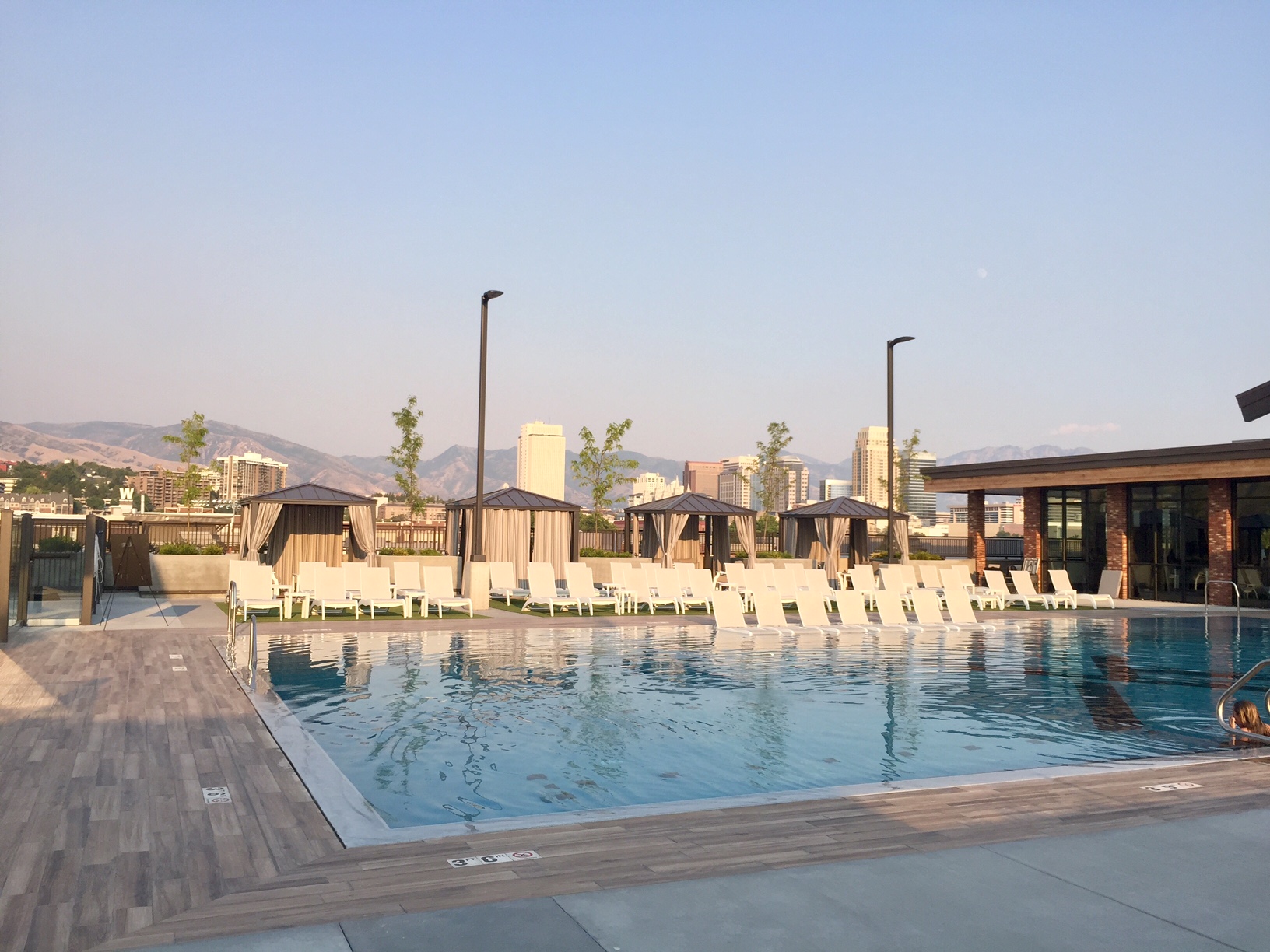 One of Salt Lake City’s largest residential developments, if not the largest in the city’s history, is officially opened to tenants.  On Thursday, representatives from Salt Development held a ribbon cutting ceremony to celebrate the completion of the 4th West Apartments on the 200 North block of 400 West.

As has become the trend, 4th West opened in sections with tenants moving into the north wing last fall.  The mixed-use residential building is large, occupying the bulk of the site’s 7.3 acres. The five-story building (six if you count the rooftop fitness center and event space), holds nearly 500 residential units.  That is more units than the combined total of the City Creek Center’s four residential towers and more than the combined total of The Vue at Sugar House Crossing and Liberty Village at the heart of the Sugar House Business District.

Half of 4th West’s residential units are two bedrooms, with the remaining units a mix of studio and one-bedroom apartments.  Based on bedroom count, if each bedroom was occupied by just one person there would be 746 people living in 4th West when the building is fully leased out; that’s over 100 people per acre.

“It’s a new idea in Salt Lake and it’s changing the atmosphere of downtown living,” said Jonny Collins, a resident of 4th West.

Fiction and his girlfriend, Allie England, have lived in the building since May 1.  The couple shares a penthouse suite but plans to upgrade soon to an even larger unit in the building.  The couple relocated from the suburbs, Collins from Draper and England from Layton.

“We wanted the people and the experience of living in Salt Lake,” said England.

It is not just the scale of the project that makes it distinct to Salt Lake, the project features amenities not typically found in Utah residential developments.  On the first floor just north of the lobby is Jerry’s Locker, a resident-only full bar with large sports-bar style big screen televisions.  The bar is a nod to the horse stable that used to occupy the site and housed horses used in downtown carriage rides.

“We reclaimed an area that has been ignored,” said Thomas Vegh, the managing partner for Salt Development, in a November interview with Building Salt Lake.  “We are able to define a new part of Salt Lake City.”

Vegh describes the 4th West Apartments as an urban resort.  Apart from the bar, most of the amenities are centralized at the rooftop level.  The large pool, with uninterrupted views of the downtown skyline and the Wasatch Mountains, is surrounded by cabanas, the type common in resort-style hotels.

The rooftop level also includes a full-service fitness center and outdoor sport court that overlooks downtown.  Additional rooftop amenities include a test kitchen and large clubhouse that can be rented out for events.

The project has attracted both Millennials and Baby Boomers, the two demographics most likely to seek out urban, downtown living.

Rents depend on the unit type, of which 4th West offers 16 different unit designs.  Rents range from $1,250 for a studio to $4,810 for a deluxe two-bedroom apartment.

The development also represents a new reality for Salt Lake City, a good economy that is bringing in out of state workers that are used to paying higher rents than the locals.  England estimates that about 70 percent of the 4th West’s tenants are from out of state.  The couple cited some tension between younger Millennial couples and older couples living in the building which has led to some building-wide rules like no drinks in the pool area and no weekday pool access after 10 pm.  But Collins attributes this tension to the newness of the building and the type of amenities 4th West offers.

“I love the unit, the building and the community,” said Collins.  “The prices are still high, but they delivered building wise.

While residential tenants are moving in, the ground floor commercial spaces remain vacant.  Vegh has stated his desire to secure a grocer for the large northeast corner space but has yet to find a willing commercial tenant.

The closest grocery stores to the area are a Harmons at City Creek and a Rancho Market on 900 West.  In the next year, Vegh might find it easier to secure a grocer as the 4th West Apartments is just one of the several residential projects that will be added to the area in the next few year.