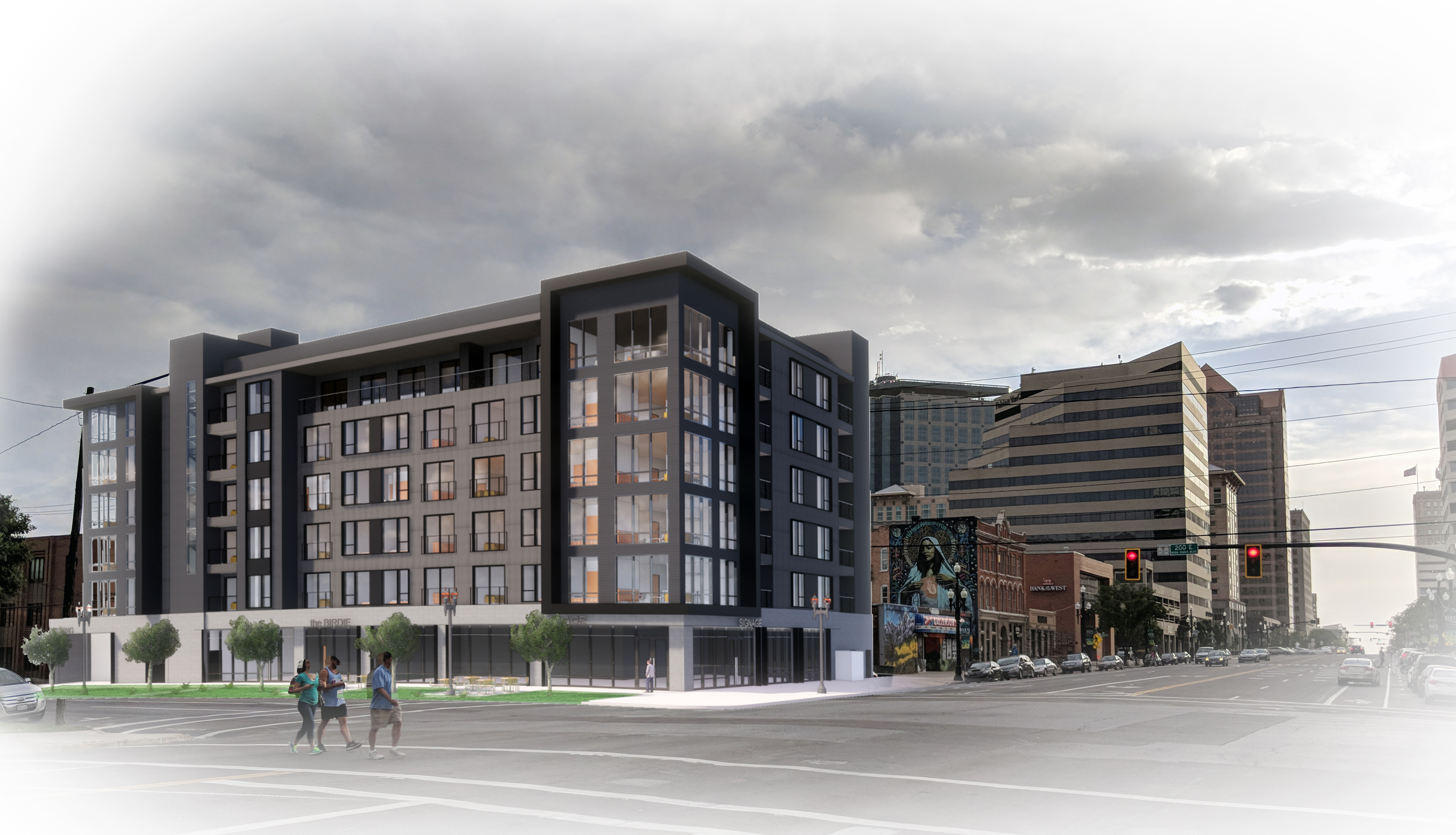 In the past few years, the area surrounding the intersection of 200 South and 200 East has been booming with new residential development, restaurants and bars bringing vibrancy to a growing node in the city.  Now one of the area’s remaining under-utilized parcels is poised to be developed.

Developers CW Urban, known for building for-sale missing middle product throughout the city, plans to build The Birdie, a proposed six-story, 70 unit mixed-use residential development at the southwest corner of the 200 South and 200 East intersection. The project will replace a 0.34-acre surface parking lot.

The project will consist of a parking podium, lobby and storefront space at the ground level, five floors of residential units and a landscaped rooftop plaza.  The ground floor will have floor-to-ceiling storefront-style windows, the actual storefront space will front 200 South and the residential lobby will front 200 East.  The residential portion will be slightly set back from the podium level.  The units will be a mix of studio, one and two-bedroom apartments.  Most of the units will include a balcony.

The project will have one parking stall per unit.  To maximize the amount of parking available without talking up leasable space, the developers will use stacked parking, which will allow for three cars in what would traditionally be just one parking space.  The parking podium will be accessed from 200 East and will have 63 stacked stalls and seven surface stalls.

The developers are going through the Conditional Building and Site Design Review (CBSDR) process and will need approval from the Planning Commission before construction can begin.  The Birdie will be the second mixed-used development underway at the 200 South block of 200 East.   The Morton, an eight-story mixed-use residential development is actively under construction across the street from the proposed site of The Birdie.

The project as proposed will match the mid-rise heights of many adjacent buildings, but the developers would be able to build significantly taller than the current proposal.  The Birdie parcel is in the D-1 (Central Business District) zone which allows for building heights of 375 feet on corner parcels, or taller if the developers go through the CBSDR process.

Up until now, CW Urban has focused on building middle-density housing.  The developers recently completed The Ruby in the Central Ninth neighborhood and are currently building The Ruth, also in the Central Ninth.  Those two projects will add a combined 29 for-sale townhomes to the area.

In addition to the Central Ninth projects, CW Urban plans to start construction soon on The Edith, a 23-unit townhome development in the Ballpark Neighborhood and two smaller developments in the East Central Neighborhood, The Cynthia and The Mabel.  Those projects will add 10, for-sale townhomes to the neighborhood.