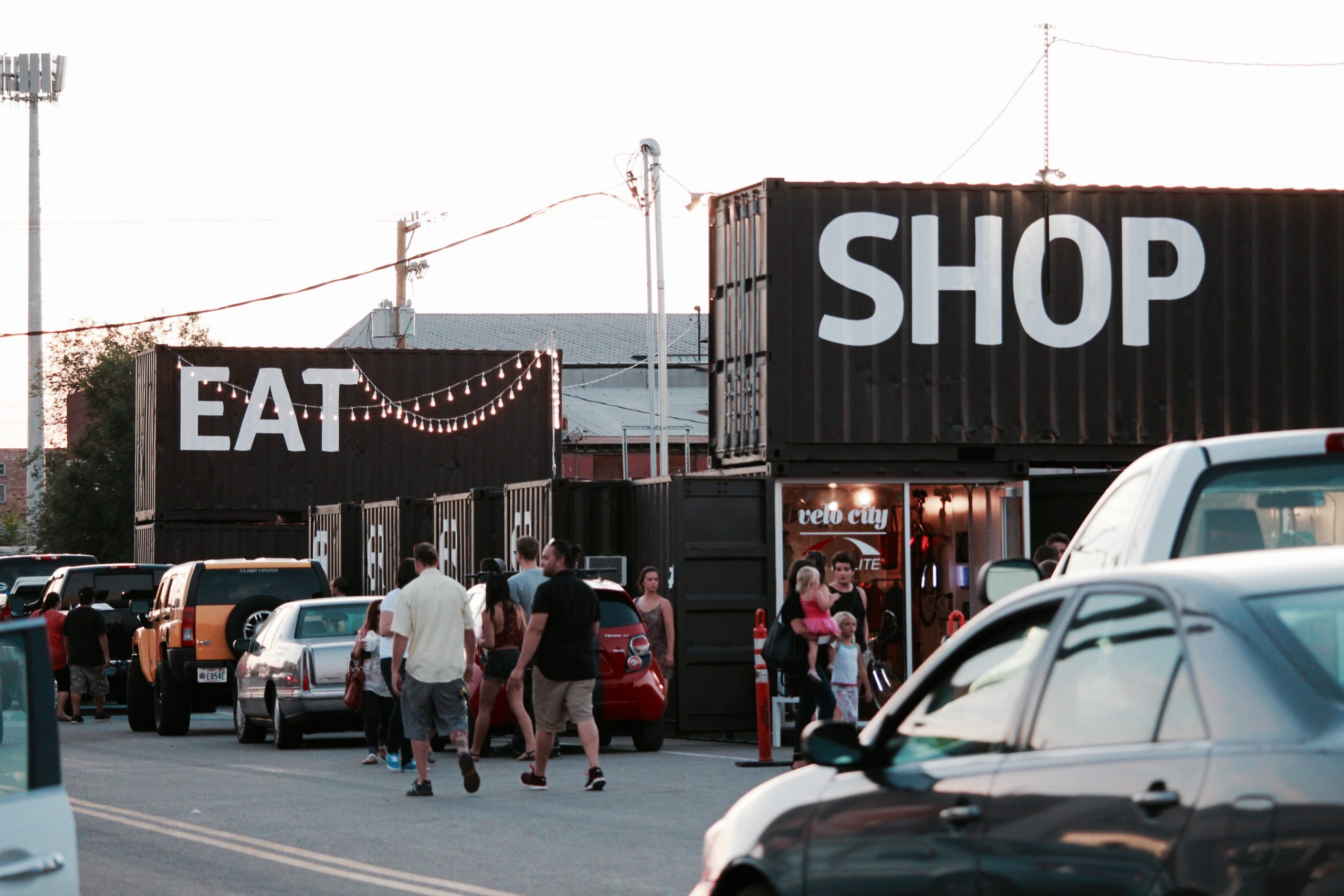 The Granary, just southwest of Downtown Salt Lake City, is seeing unprecedented investment on the private side, with big new construction recently completed and just underway.

In her recent state of the city speech, Mayor Erin Mendenhall touted the upcoming development – finally – of the Fleet Block, the city’s 7.5-acres on the southern edge of the Granary.

Yet the city’s Planning Division, after gaining approval at the Planning Commission in December, is still fine-tooling its proposed rezone. It must still pass the city council.

Before the city can address the CG zoning in the majority of the Granary – to the north and west – the Fleet Block is the priority, the city insists.

Might this rezone finally provide a template for changing the Granary’s CG’s zoning to a truly urban-based form?

For the Fleet Block, the city’s Planning Division is proposing a new form-based zone, FB-UN-3. It replicates the urban form requirements of the existing  FB-UN-1 and UN-2 zones, and applies them to larger structures – including allowing greater building heights (85-125 ft).

Will it be enough to produce the city’s stated goals – walkability and interesting urban form? Given the domination of most of the area’s wide streets by cars, the transition will require some bold moves by the city’s transportation department.

The Granary is a warehouse and manufacturing district just south and west of Salt Lake City’s downtown. The city’s Redevelopment Agency adopted it as a project area and started collecting tax increment in 2000. Until very recently, the Granary had some of the most disappointing tax increment growth of any redevelopment area in the city.

The district has seen incremental investment – Rico Foods and Kilby Court concert space were early pioneers, and non-profits like Artspace and Volunteers of America have built major facilities in the neighborhood. More recently, Atmosphere Studios, Fisher Brewing, Kiitos Brewing, and DPS Skis have all rehabbed existing structures in the district.

Significant investment from Denver and Seattle in the Granary began in 2018 with INDUSTRY and Lake Union Partners along with local developers like Brandon Blaser. Their office, retail, and residential units aim to hit the Granary on a block-transforming scale.

At the same time, the grit hasn’t been washed out of the district. Warehouse and manufacturing uses are still apparent.

The city has signaled it values the continuity of the area’s history. The RDA offers its full array of low-interest loans, as well as forgivable loans for adaptive reuse of existing structures. Moreover, the FB-UN-3 zoning proposed for the Fleet Block recognizes light manufacturing and maker spaces as permitted uses.

City planners are proposing their most urbanized form-based zone yet – FB-UN-3.

Like its forebears FB-UN-1 and -2, the zone focuses on the orientation, massing, and height of buildings rather than their use or parking needs.

David Echeverría, Senior Planner, notes in his staff report that the new zone is meant to be pedestrian-friendly and mixed-use, allowing light manufacturing and industrial assembly, and greater building heights than the city’s other FB-UN zones.

That height is eight stories (85 ft), with possible increase up to 12 stories (125 ft) with design review.

The new zone would limit developments to one driveway each on a block face. Building frontages must have 75% active uses, which can include residences on the ground floor. It also requires developers to put in mid-block walkways as specified by the Downtown Master Plan (2015). Those public mid-blocks are potentially narrow, however – a minimum of 10 feet wide with a 6 foot sidewalk.

There are no parking minimums or maximums in FB-UN-3. If developers choose to build parking, it can’t be in front of their buildings. Parking must be on the side (with a 25 ft setback), under, or at the rear of primary structures.

In the city’s Downtown Master Plan (2015), the Granary is envisioned as “Mid-rise Streetcar” in the broad strokes of a future land use map.

A downtown streetcar has been included in the city’s transportation and land-use documents from the early days of the Becker Administration (2008-16). A branch running down 400 West, through the Granary to 900 South, was identified as the key catalyst in the Granary’s redevelopment.

To this point those plans have seen little hope of implementation. New streetcar lines, like new bike lanes, were not on Mayor Jackie Biskupski’s (2016-2020) to-do list. Nor has UTA shown any interest in leading new streetcar design and construction.

With no trolley-scaled transportation to guide development in the Granary, its remaining streets become that much more important.

The connection between land-use and transportation isn’t lost on the leadership of the Planning and Transportation Divisions. The latter has been working on what it calls internally a “completer streets book” – 15 street types that “consider place type and land use context; functions of the public right-of-way; and desired outcomes, such as economic development and quality of life.”

Transportation Division head Jon Larsen expects the Street and Intersection Typologies Design Guide to be ready for public review “in the next month or two.”

In addition, two streets in the Granary have been identified as immediate priorities for redesign and reconstruction – 300 West and 900 South.

But what of the other streets in the Granary? The master plan mentions most of them: 500 West and 900 South are identified as part of the “green loops” of linear parks, and 400 West is supposed to host the streetcar.

Despite the aspirations of the 2015 master plan, 400 and 500 West are not candidates for any immediate attention from the city. Nor is 700 South.

The Street and Intersection Typologies Design Guide is expected to provide policymakers with progressive examples of public right-of-way design. Depending on the public comment process, review by city boards and commissions, and the city council’s scheduling, it may not see official adoption until 2021.

But we don’t have to wait until then to see examples of what a “completer” Granary street might look like.

700 South, ironically not called out in the master plan, has seen tactical urbanist intervention in recent years with a series of summer pop-up festivals. In 2013 and 15, the extended block party took over the street. Granary Row was built using the north half of 700 South on the 300 block.

Kentlands Initiative Executive Director James Alfandre was able to demonstrate, to a certain extent, how his idea of “median development” would look, feel, and function.

The concept is to take approximately half of the 132-ft right-of-way and build at pedestrian scale.

Alfandre learned a lot about city hall in his years trying to make median development happen. Just to get Granary Row permitted was a heavy lift. “The RDA and the Mayor were on board. Ralph said make it happen, and the small business advocate was a big help. Then engineering said, ‘Are you kidding?’ It didn’t fit in any of the permitting boxes for them or Building Services.”

Alfandre argues that median development corrects a “very inefficient use of land” by turning an underutilized street into “a place that is very friendly for people, where people want to be.”

Alfandre’s proposal is well-known around city hall, and several officials responded to our requests for comment.

Orion Goff, head of Building Services and the city’s influential Design Review Team (DRT), says median development could happen if there were “100 percent buy-in from the [city] council.” Lawmakers would have to be willing to vacate the right-of-way, either in a sale or a long-term commercial lease agreement.

That political will – to sell or lease city streets – hasn’t materialized very often. Notably, the city council still vacates “unused” alleys to adjacent property owners. It also sold a block of Main Street to the LDS Church in 1999.

In addition, the owners of INDUSTRY are currently negotiating with the city to buy a slice of the right of way in front of their recently-opened office building on 500 West.

The barriers at city hall to Alfandre’s vision may be significant. But they’re not to be found in the planning or transportation departments. “We do support rethinking streets in the Granary,” Planning Director Nick Norris told Building Salt Lake.

For his part, Transportation Director Jon Larsen, referring to 700 South, 400 and 500 West, observes “it’s crazy how wide those streets are, because they’re never going to have more than one lane each way of vehicle traffic – ever.”

With the redesign and rebuild of 300 West and 900 South, Larsen points out that “The Granary is going to be the crossroads of some of the best bike infrastructure in the state.”

Whether that will be enough to tip the scales from wide streets, fast cars, and menaced pedestrians to a walkable and unique urban neighborhood is very much still in the balance.