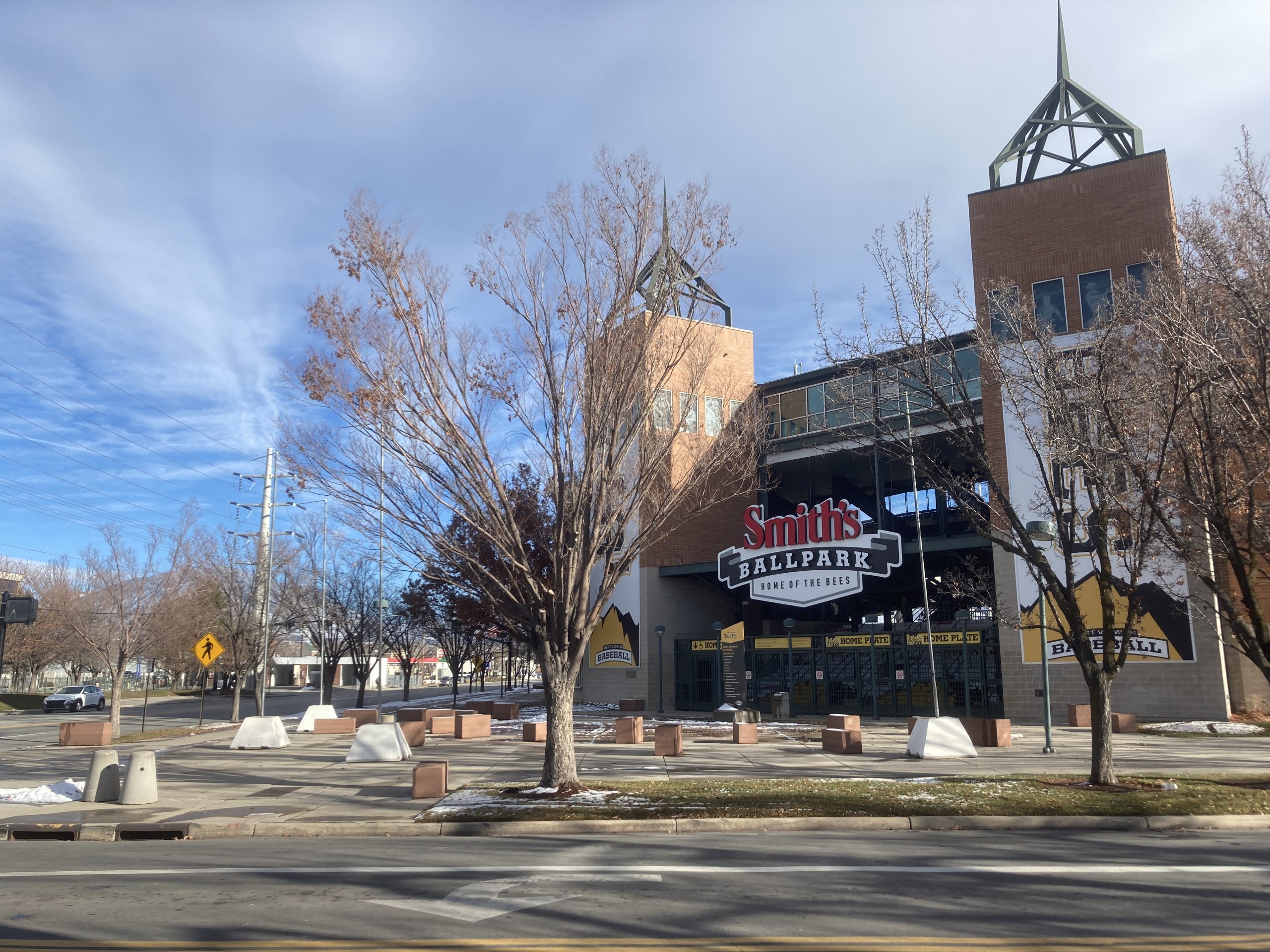 Besides the Ballpark itself, is there a “there” there?

This was the conundrum facing planning consultants brought together by Wasatch Front Regional Council (WFRC), Salt Lake City, and UTA, looking at the half-mile around the 1300 South Trax station, just south of Downtown. A draft of the plan has been released.

The “Heart” of the Ballpark, W. Temple and 1300 S. in aerial + street context. New housing is already coming to the area, just south of Downtown. Photos by Luke Garrott.

Besides being sliced-through and boxed-in by the auto-dominated streets of 300 West, 1300 South, Main and State Streets, the neighborhood’s other challenges include complaints of crime, homelessness, and gentrification.

As land-use policy, the Draft Ballpark Station Area Plan is meant to address as much of the neighborhood as possible, which lacks a master plan and enjoys a combination of light-industrial and single-family land use patterns.

The blocks south of 1700 South, within Ballpark Community Council boundaries, are left out of the plan as they are located more than ½ mile from the Trax station.

Currently under internal review at City Hall, the Planning Division is taking comments on the plan. It would then move to the Planning Commission and the City Council for discussion and adoption by the end of the summer.

Highlights of the plan

Following its main funding source, the document puts the “Transportation and Land Use Connection” (WFRC’s grant name) at its center. Accordingly, the plan radiates outward from the UTA Trax Ballpark lightrail station at 1300 South.

The station at 200 West 1300 South sits conveniently between activity generators, including two schools, the Ballpark, and the big boxes on 300 West. Barely acknowledged in the Plan, the Wal-mart and Lowes properties are included in the area marked for upzoning.

The area is dubbed “the Heart of the neighborhood” in the Plan. It looks to build on its big asset, the Ballpark, and as such the consultants study three other urban redevelopment efforts built around minor-league baseball parks: El Paso, Oklahoma City, and Memphis, as well as Fenway Park in Boston and Chicago’s Wrigley Field.

Lessons drawn from these include that “a ballpark is not enough” to drive redevelopment – an experience Salt Lake City has shared. The most successful efforts, the Plan notes, have created a ballpark district, using existing assets, encouraging adaptive re-use and mixed-use, including creating and programming public space adjacent to the park.

As such, planners place pedestrian-oriented land uses and multi-modal transportation connections at the Plan’s forefront.

Zoning changes in the center

Quite a large area – at least 10 square blocks (100 acres) by BSL’s count –  is identified as “appropriate for the highest densities allowed in Urban Station Areas,” which it identifies as “Heights of up to 120 feet.”

This “dense urban environment and entertainment zone,” hued in navy blue on the map below, stretches from ~1000 to 1350 South along 200 West (the Trax line) and at its southwestern end, captures the Lowes and Wal-mart properties on 300 West.

The Plan cautions that “This level of density must be balanced with improvements to the public realm including an expanded sidewalk, pedestrian-focused amenities, plazas, street lighting, and street trees. A high level of visual interest and design quality is needed to balance the increased density in the area and require street activating uses on the ground floor.”

Following their findings at other ballparks across the country, consultants recommend transforming a half-block of West Temple south of 1300 South into festival street adjacent to the west side of the stadium.

The vision is a car-free plaza for use during neighborhood events, like farmers markets, movie nights, and concerts as well as closure to cars on game days.

Potential, and actual use along W. Temple. Image courtesy the Draft Plan, photos by Luke Garrott.

In addition, the northeast corner of West Temple and 1300 S is identified as potential community space (likely a small plaza). It currently hosts a monument sign for the stadium, at the southwest corner of the city’s parking lot behind the Horizonte school.

Widening sidewalks is on the list, as well as additional pedestrian crossing on 1300 South – at the Trax gates at 200 West. Currently the area is heavily used by pedestrians and Trax riders.

The Trax station at 1300 South. Its design doesn’t seem to serve its current or future use. Photos by Luke Garrott.

Planners highlight the need to transform the design of the Trax station from a “suburban” to “urban” one, which has access from all directions, not just the parking lot.

Presumably UTA is in favor of converting its park-n-ride that fronts 1300 South to highest and best use. TSA Transit Station Area urban core zoning is implicitly recommended in the Plan.

Notably, the Plan ignores the retail big boxes on 300 West (Walmart, Lowes) as legitimate generators of trips in the “Heart” of the neighborhood. In fact, the Plan intends to zone them into non-conforming use.

As popular as that Wal-mart currently is, a change in use is unlikely anytime soon. Why not embrace it and design an urban pedestrian realm around it?

Multiple sources say the neighborhood needs more parks. The Plan itself acknowledges it:

“The Salt Lake City Parks & Public Lands Needs Assessment identifies the neighborhood as an area of greater need for green space. This area is likely to receive much of the City’s future growth, yet has the lowest level of service for parks in the city at 2.8 park acres per 1,000 population compared to a city-wide level of service of 3.5 city-owned and managed park acres per 1,000 population.”

The Trust for Public Lands, for its part, identifies multiple areas in Ballpark as “high priority” and “very high priority” for new parks.

While the Plan touts a handful of “Big Moves” (most are covered here), establishing new parks is not one of them – with a notable exception that lies more than two blocks away from the identified Heart of the neighborhood.

At 1530 S. West Temple, the city’s Public Utilities Department is anchored by the Leroy W. Hooten Jr. Building. The Department has scheduled a vacation of the site within its 10-year plan, according to a source at City Hall.

It sits on a large parcel assemblage by the city of 12.87 acres, by BSL’s count, which includes People’s Freeway (now Ballpark) Park. The large site is mentioned as a potential library and park in the Plan, and was touted by Mayor Mendenhall in her public announcement.

One would imagine a full city block (10 acres) turned into a public green space would significantly help address the neighborhood’s parks deficit.

But is it the right location – two blocks from the proposed neighborhood center?

If the city relies on the Public Utilities site to meet its parks needs, will it succeed in building a center, a “Heart” at 1300 S. and West Temple – without including a substantial, outstanding public/green space?

Despite the acknowledged fact that the neighborhood suffers a deficit of public green space, the city is seemingly reserving its street-front parking lot behind the Horizonte school for mixed use development, not public use.

While it includes aspirational language to “explore options for additional greenspace in the heart of the neighborhood in and around the ballpark,” the Plan offers zero implementation steps to that effect. The only parks implementation step is future green space at the Public Utilities site.

That is, unless we include the Plan’s other park recommendation – a narrow strip along the south side of UDOT’s 900 South Interstate ramp that splits the Central 9th neighborhood from Ballpark. Since it goes nowhere, the potential linear park barely registers.

The plan recognizes that connectivity between multiple points in the neighborhood, especially going east-west on streets other than car-dominated ones, i.e. 1300 S. and 1700 S., is severely limited.

To solve that problem, it recommends that the Ballpark Trax station be accessible from all directions.

Accordingly, in the Heart of the neighborhood the pedestrian experience, including safety and accessibility, should be improved, as bike routes that are established according to the city’s Bicycle and Pedestrian Master Plan.

Those routes focus on streets to the north and south of 1300 South currently cut off. The Plan identifies Lucy Ave and the Kensington Ave Byway as potential west-east routes – without offering strategies to make them happen.

Lucy Avenue just north of Smiths Ballpark. Not yet an east-west connection. Photos by Luke Garrott.

For its part, 1300 South remains a car-dominated street. Renderings from the Plan show an ambiguous use of space where two lanes of cars mix with a couple chilling on their bikes in one of the lanes – probably not realistic.

Cross sections look like the status quo, with a landscaped median in place of the center turn lane. It is similar to the Transportation Division’s “Destination Thoroughfare” of its new Street Typologies.  Whether accommodating the same or greater level of cars as present through the “Heart of the Neighborhood” is a good placemaking strategy is probably up for debate.

The Plan recommends that policy makers “study the potential future lane reconfiguration of 1300 South to eliminate or narrow traffic lanes and expand and improve the sidewalk.”

…And another thought – housing

Housing policy, understandably under-addressed in plan that focuses on spurring development in a non-existent neighborhood center, mentions the creeping ills of gentrification and displacement.

Short on suggestions, it recommends education for tenants who are vulnerable to displacement and creating a land-trust condo model to encourage low-income home ownership.

On the hot topic of homelessness, the Plan demands increased “outreach services and case managers” as well as “equitable distribution of social services…coordinated on a county-wide/regional level.”