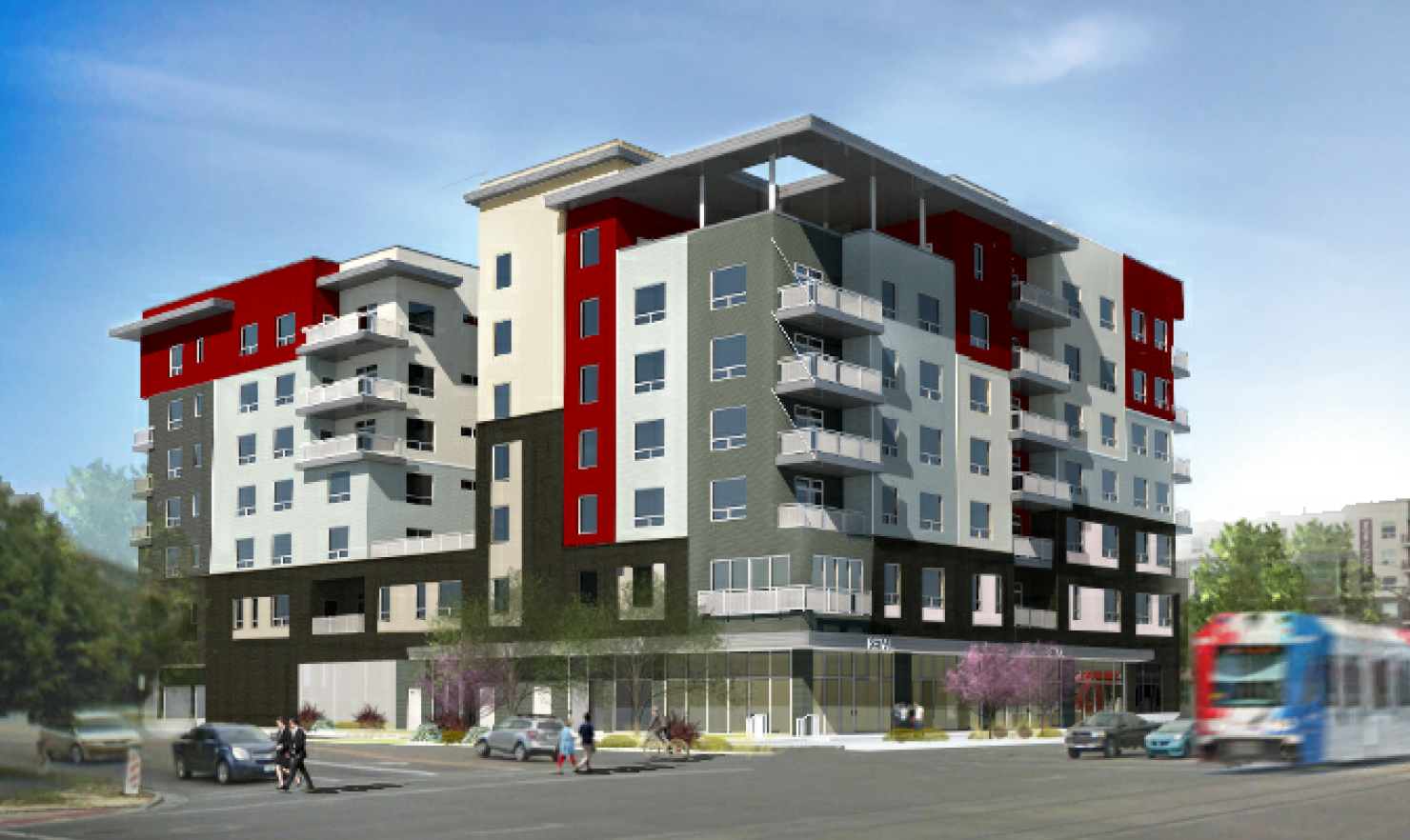 Another underutilized corner of Salt Lake City’s 400 South Corridor is about to drastically change.  Crews have demolished the one-story former Rent-a-Center and Papa Johns buildings to make way for the Quattro, a proposed seven-story, 95-unit mixed-use development at the northeast corner of the 400 East and 400 South intersection.

Construction is underway on the buildings parking podium and utility infrastructure.   The project is by developers, Wadsworth Development Group and dbUrban Communities and was designed by IBI Group.

The Quattro will consist of a two-story concrete podium below five wood-framed floors.  The project will have a mix of studio, one, two and three bedroom apartments the majority of which will be one and two-bedroom units.

The ground floor will house 2,355 square-feet of retail space, a sales office, lobby, mail room, storage area for bicycles and structured parking.  The apartment and parking entrances will front 400 East, while the retail portion will front 400 South.

Floors two to seven will house the residential units and residential amenities that will include two fitness areas, two hot tubs, a fire pit, lockable storage units and a clubroom.  The project will also include two amenity decks, one at the third level that will overlook 400 East and one on the seventh floor that will overlook both 400 South and 400 East.  The seventh-floor deck will be partially covered and will include the hot tubs, fire pit and seating area.

The developers also plan to convert a small, one-story building directly east of the site of the new construction building into a Starbucks.  The building previously housed a Subway Restaurant.  The Starbucks will include a drive-thru and 17 surface-parking stalls.

Because of the proposed project’s proximity to two TRAX Stations, the developers were required to go through the city’s Transit Station Area Development Review process (TSA).  The new construction building scored 128 points.  Projects that score less than 125 points must have a public hearing and site and design approvals from the Salt Lake City Planning Commission.

The developers earned the bulk of their points for the project’s density, active ground floor uses, structured parking, 360-degree architecture and building materials.

Since 2015 the 400 South Corridor between 900 East and 300 East will have added 830 new residential units with an additional 507 units expected to be under construction in 2019.  The Quattro will be directly east of the recently completed Block 44, a seven-story 214-unit development at the northwest corner of the 400 South and 400 East intersection.