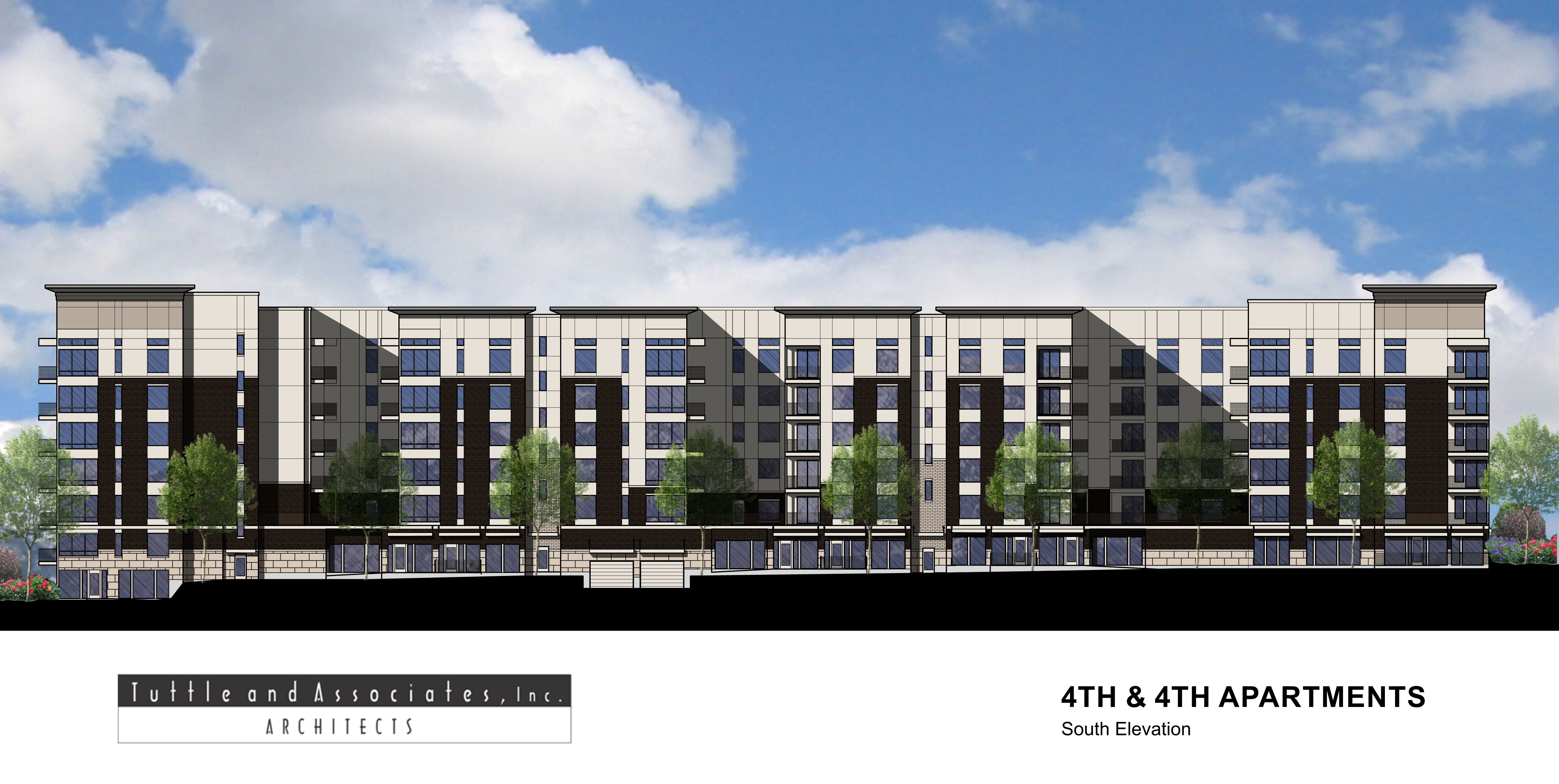 The developers, Wright Development Group, have received building permits and construction of the 4th and 4th will begin as soon as demolition work is finished.

The project has changed hands and designs several times since first proposed several years ago.  The project was originally planned to include ground floor retail and have a smaller footprint, replacing just the former Sizzler building and adjacent surface parking lot.

When the project changed developers, the Wright Group decided to take up more of the block and the 4th and 4th Apartments will now occupy what was previously five separate parcels and will take up over have of the block on 400 South.

The development will be seven stories with five floors of residential above a two-story parking structure. Instead of ground floor retail, a clubhouse and fitness center will occupy the corner space where 400 South and 400 East intersect.  Four live/work units will occupy the ground level on 400 South and the lobby and main entrance will front 400 East.

The project will consist of 213 residential units.  The units will be mostly a mix of one and two bedrooms. The development will include three podium-level courtyards that will provide open space for tenants and amenities including a pool and jacuzzi.

The 4th and 4th Apartments is one several projects recently added to 400 South corridor.  Those projects, like the Encore Apartments, have been criticized for a lack of street engagement despite being in the Transit Station Area (TSA) zoning district that was created to encourage walkable, transit orientated development along the University TRAX line on 400 South.

“The 400 South corridor is such an important corridor in our city, and what is being developed is not contributing to a well-built urban environment.” said Kitchen in a June 2016 interview with Building Salt Lake.

Under the current TSA zoning ordinance, projects in close proximity to TRAX must receive a development review score before building permits can be granted.   Under this process, developers receive points for different project features that encourage walkability and add to vibrancy.  Projects must earn at least 100 points to avoid facing the Planning Commission.

Because the TSA process allows for developers to pick and choose which components get them to 100 points, developers were opting for design features that add to their score but not necessarily walkability.  Under the original system, projects received 50 points just for having structured parking, while having active ground floor uses were worth 10 points.

The Planning Division under guidance from City Council is working on revising TSA guidelines to change how points are awarded.  Under the proposed new guidelines, a parking structure would be a maximum of 25 points and would need to be wrapped by better materials and active ground floor uses.  The new guidelines would also award more points for affordable housing, reduced parking ratios, sustainable design elements and public art than the previous TSA ordinance.

Under the proposed changes to the TSA zoning district, the Encore Apartments would have received 84 points (instead of 151 points earned under the original ordinance) which would have required the developers to go before the Planning Commission for approval.