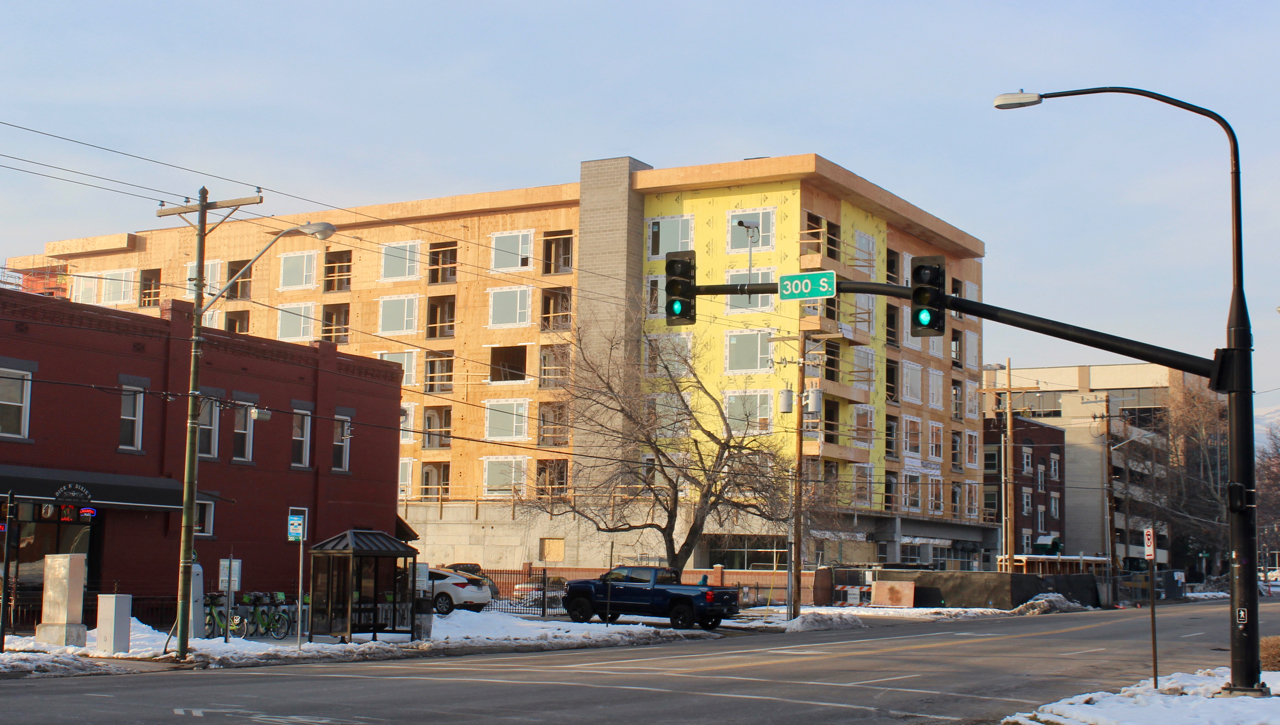 Residential and commercial growth in Sugar House and downtown Salt Lake may get most of the attention, but the Central City neighborhood is building up just as rapidly.  In the past two years, the neighborhood has welcomed hundreds of new residential units and will soon welcome 425 new residential units from two projects underway in and around the neighborhood.  Those projects, the Bonneville and Liberty Boulevard, are either nearly fully framed out or partially framed out.

The Bonneville is a six-story, 158 unit residential development on the 200 South block of 500 East.  The project is mostly framed out and will be open to tenants late spring.

Just outside the Central City neighborhood boundary in the East Central neighborhood is the Liberty Boulevard Apartments.  The mixed-use project, on the 700 East block of 400 South, is partially framed out and will be a four-story development with 267 residential units, 10 percent (27 units) of which will be reserved for residents earning up to 80 percent AMI (Area Median Income).  The project will include ground-floor retail on 400 South and will occupy the entire length of the block fronting both 400 South and 500 South with midblock frontage on 700 East between Ruby River Steakhouse and Ex-Wives Place Bar.

Both projects are just one phase of growth in the area.  Construction is in the early stages on the 4th and 4th Apartments, a seven-story, 210 unit development on the 300 East block of 400 South.

Construction should start this year on the Liberty Square Apartments, a four-story 139 unit residential project proposed for the 600 East block of 500 South, directly north of the Trolley Square Mall.  The project’s developers, Cowboy Partners, have applied for building and demo permits and are waiting for permits to be issued.

Three other mixed-use projects are moving forward in the neighborhood.

Trolley Square Ventures will go to the Historic Landmark Commission in the coming months for their plans to redevelop the lot directly south of the Trolley Square Mall on the 600 South near 700 East.

The city is seeking RFP’s (request for proposals) from developers to convert the parcels north of the Public Safety Complex into an affordable housing, mixed-use, mini innovate district.

And at the site of the former Public Safety Building near the 200 South and 300 East intersection, Cowboy Partners with Form Development plan to build a four-building mixed-use project that will include affordable and market rate housing, retail and the adaptive reuse of the Northwest Pipeline Building.