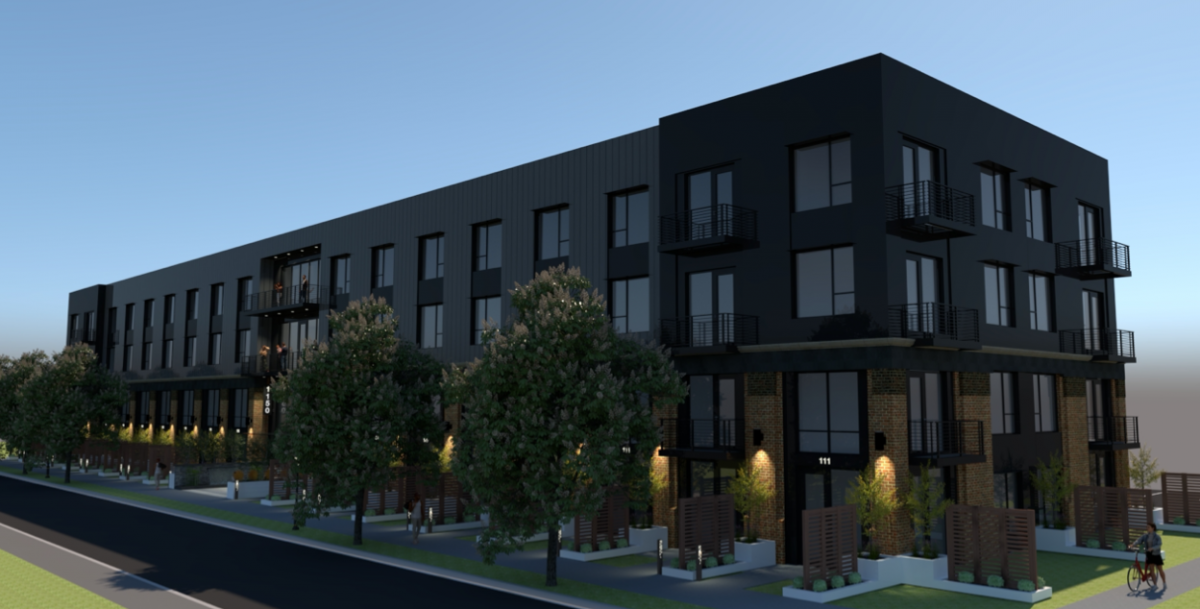 Local developers are looking to transform a one-acre lot one and half blocks north of Smith’s Ballpark into 120 apartment homes – aiming to keep rents “affordable.”

Without tax credits, builders hope to keep their units renting at 30% of a person’s income making 80-100% of the area’s AMI – HUD’s threshold for being cost-burdened.

Going to 45 feet will allow the exterior materials to avoid EIFS and stucco, the developers state in their narrative. The project aims to have “high-end, exterior and interior finishes throughout.”

The project, called The Collaborative, is only a block and a half away from the Ballpark Trax station at 1300 S and 200 W.

Although the developers tell us that their financing is still being worked out, the project signals continued supply-side interest in the area despite uncertainties about the future of the Salt Lake Bees Triple-A Baseball team’s tenancy in the city-owned ballpark stadium.

Developers have put under contract for $3.8 million a 1.01 acre, four-parcel assemblage at 1116-1160 S Richards Street (between Main and West Temple).

120 units (mostly studios) will be parked with 62 surface-lot spaces to the rear (west) of the structure, a .5 : 1 ratio. The lot will be accessed by Fremont street on the north. The proposal includes four secure bike parking stalls.

Developers note in their submission that every ground-floor unit facing the street has a porch that is meant to interact with the street.

Also on the Richards St. (east) frontage, architects have included a centerpiece courtyard “where tenants gather and or sit to await their ride share.”

It will be interesting to see if the project can pull off “attainable,” if not “affordable” rents without subsidies.

Defy Co. Lab’s Jake Williams told us in a message that “​​We do not currently plan on applying for tax credits but that could change as we get further down the road. We are hoping to be able to do the project with no subsidy but we are still pretty early in the process.”

That process includes working with a planner to meet city guidelines and a planning commission hearing, yet to be scheduled.

Here are some images from the site and nearby neighborhood:

1116-1160 S Richards Street (between Main and West Temple). 1130 S Richards was a hub for punk rock and bicyclists in the early 2000s and was cited by SLC Police as an Illegal Dancehall in 2009. The author might have been at some of those parties.

Rowhaus, on W Temple, a condominium built circa 2005, is less than a half-block away from the proposed project. New single-family home construction on Richards St, and W Temple, near the Collaborative site. Photos by Luke Garrott.