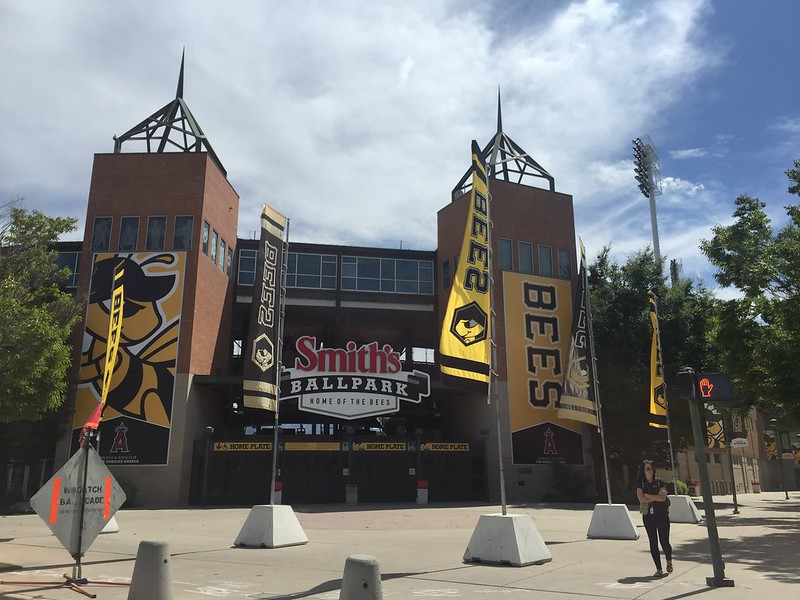 The Salt Lake City Council appears ready to approve a sweeping new master plan for the Ballpark neighborhood, a framework for updated zoning and clear guidance for future development in one of the city’s most troubled neighborhoods.

The move comes amid negotiations between city officials and representatives of the Larry H. Miller Group, which is rumored to be considering building a stadium in the suburbs and relocating its Salt Lake Bees team out of the Ballpark.

It also comes as developers who already own significant amounts of private property keep an eye on the negotiations. And despite the impending upzoning and promises of major civic investments from the city in the neighborhood, developers are taking two different approaches to their inholdings in Ballpark: they can either wait to see what happens or forge ahead.

“We’re just trying to see what happens with the Bees themselves,” said one developer with land near the stadium. “We’re excited about the property that we have. We’re willing to just hear out the discussion on the Bees because we feel that will really make a difference.”

The Miller Group hasn’t made its intentions clear with its minor league team at the city-owned baseball stadium. The family owns more than 1,000 acres of greenfield in the southwest Salt Lake County region known as Daybreak.

With much of the state’s tech ecosystem developing in the area around Point of the Mountain, Daybreak could prove to be an attractive place for a state-of-the-art stadium surrounded by mixed-use development all owned and controlled by the Millers. If that means the Bees move out of Ballpark, the uncertainty is too much of a risk for some.

“We’ve heard from the city, and we know they want the Bees to stay. We’ve heard from [the Larry H. Miller Group], and they say that they’re committed to continuing conversations with the city,” said Aabir Malik, vice president of development with the Colmena Group, which co-owns two parcels immediately west of the stadium. “However, they haven’t said that they are committed to staying long term.

“From our standpoint, the fate of the Bees in Salt Lake is still up in the air,” he said. “We don’t want to move too soon – we want to move in concert. Just knowing some of these other big moves that will take place in the short term will help dictate what we do on those sites.”

The yearslong negotiations between the city and the Millers comes as the Ballpark neighborhood faces the highest rates of violent crime in District 5, which also includes Liberty Wells and East Liberty.

In response to it all, the city sprang into action with a sort of master plan for a portion of the Ballpark that centers on the Trax station at 1300 South. There is talk of finding space in the near future for a library in the neighborhood and eventually a permanent space.

The council is poised to approve the plan next month, and the Planning Division would likely move forward with a widespread rezone and changes to the Ballpark Trax station soon after.

The result is likely to bring fuel to the already bustling redevelopment happening in the sprawling Ballpark neighborhood, which spans from 700 South to 2100 South, I-15 to the west side of State Street.

“We talk about creating mixed-use neighborhoods (but get) something like a small corner of commercial space in an otherwise big, expansive residential space which I guess technically is a mixed-use neighborhood,” said Councilman Darin Mano, who lives in and represents Ballpark. “But this is truly, fully integrated mixed-use that you can walk to. What I see is a great mix for urban living.”

New housing on the way

With or without the Bees, a handful of new projects are on their way to the neighborhood. And while it’s unclear whether the city will have a vacant stadium with an unknown future, development is occurring.

“We fully believe in the future of the Ballpark neighborhood,” said Stephen Alfandre, a founding principal with the development group Urban Alfandre, which is a Building Salt Lake supporter.

Alfandre built one of the early for-sale townhome projects in the neighborhood, at 1700 S. Richards Street. They’re preparing to build a rental townhome project near 1450 S. Main.

At 1500 S. Main, the site of a troublesome motel, Alfandre is under contract and seeking a rezone of the property to create a mixed-use residential building. That project would remove a source of crime in the neighborhood and replace it with space for hundreds of residents and new businesses two blocks south of the stadium.

While some are waiting to see what happens in the area before moving forward, others are moving full throttle forward.

“With all of the wide, pedestrian-unfriendly streets in Salt Lake City, the Ballpark has great scale for creating authentic neighborhoods,” Alfandre said. “Main Street has a great scale, the blocks are a great size and there already exists a strong resident base who care about where they live.”

The neighborhood is a straight shot into Downtown, with a frequent bus line on State Street, fixed-rail on 200 West and a quickly expanding bike network on Main and 300 West.

Another developer is seeking a master plan amendment for properties between 1358 S. West Temple and 1370 S. West Temple to allow for more density than what’s allowed in the existing zoning, opting to become an early adopter of the extra height that will be allowed by the Ballpark plan if passed.

That rezone envisions a seven-story building with commercial space fronting West Temple, which the Ballpark plan slates as a festival street for activities during and outside of baseball season.

Problems with or without the Bees

A handful of recent development now finds more new for-sale townhomes in the neighborhood than likely any other in the city. There is a mix of single-family streets near streets zoned commercial. Main Street still has a mix of residential next to retail and motels.

Paul Svendsen has amassed a handful of properties in the neighborhood closer to its 1700 South commercial node. He rehabbed an old convenience store at 1700 S. Main that now serves as a nonprofit’s headquarters and could one day be a restaurant or brewery. Svendsen updated a commercial building at 1580 S. Main and owns a vacant lot immediately across the street.

Builders are wrapping up an apartment project on Svendsen’s land at Major Street and 1700 South that will become home for dozens of people.

But that flurry of activity is largely because his holdings are a bit south of the stadium.

If he was closer to the stadium, he might have different plans.

“If I owned property in the immediate vicinity of the Ballpark I’m sure I’d be taking a wait and see approach,” he said. “The constant barrage of syringes, used condoms, trash, human shit, camping, trespassing and other petty crime is a far greater concern than anything that might happen with the Bees.”

“I can’t believe the situation right now,” he added. “It’s just shocking this is happening in Salt Lake.”

The city’s ability to work with the Miller Group has an impact on the neighborhood’s future. But that won’t be the end of it.