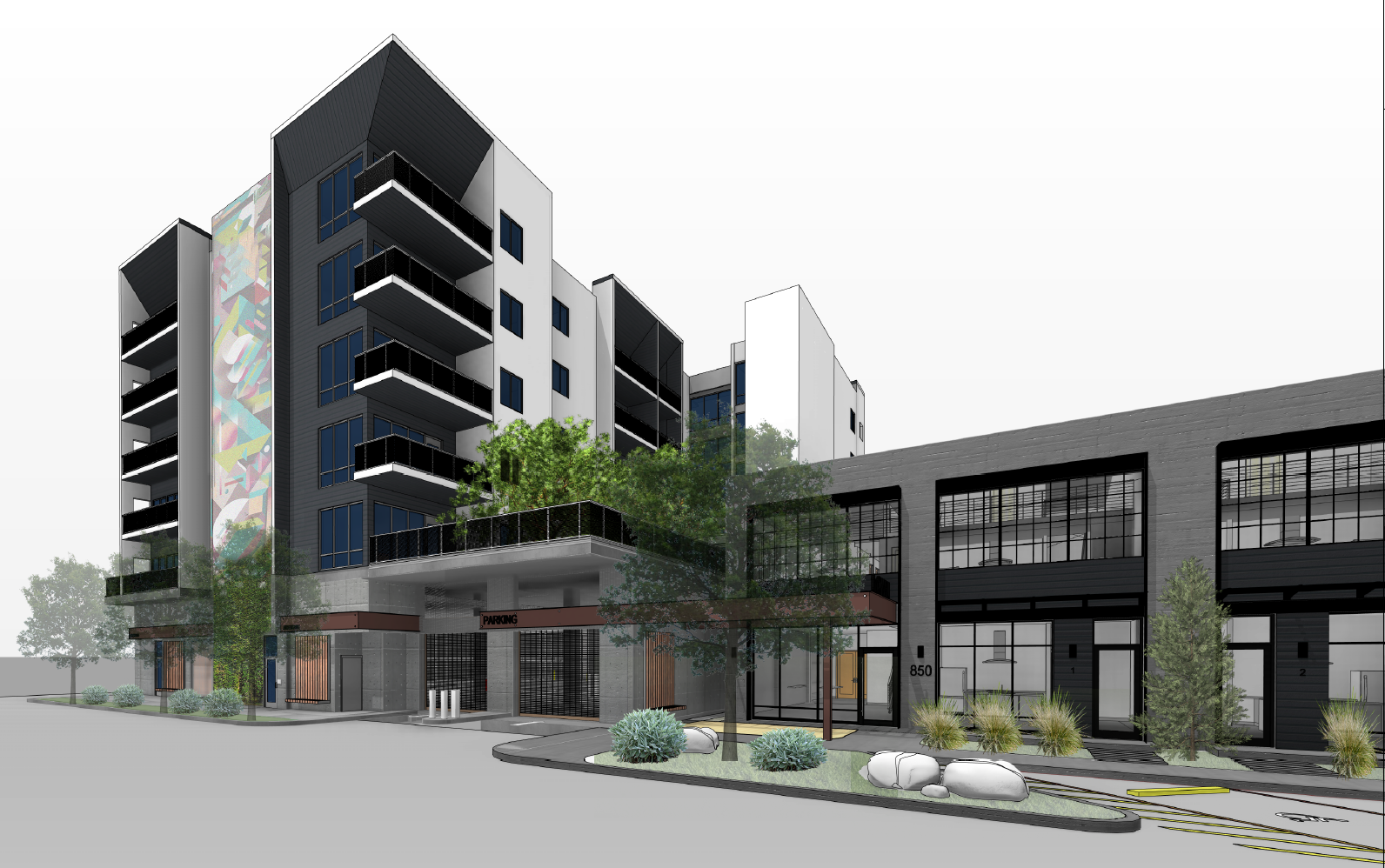 The Central Ninth neighborhood has become one of the city’s biggest success stories in neighborhood revitalization.  The neighborhood is attracting both public and private investment resulting in hundreds of new residential units and dozens of new retail and dining options.

Despite the neighborhood’s success,  a stubborn four-block area dominated by car dealerships, vacant buildings and surface lots cuts the neighborhood off from the increasingly vibrant Downtown and Central City/Liberty Wells corridors.   Local developer, CW Urban, is looking to fill some of that vibrancy gap in the area bounded by 700 South, 900 South, State Street and 200 West with two mid-rise residential developments.

The largest of the two Central Ninth projects is The Charli, a proposed 90-unit condominium development that will include a six-story new construction building and the redevelopment of the Taffy Town warehouse on 800 South and Richards Street (50 West).

According to planning documents, The Charli will be built in two phases.  The first phase will consist of the six-story building.  The new construction portion will include a concrete podium and five wood-framed floors with 64 units.

In the second phase, The Taffy Town warehouse will be converted into a two-story condominium building with 26 residential units.

Both buildings will share a lobby, common room, parking structure and a landscaped roof deck that will occupy the second story just above the parking podium.

The development will utilize stacked parking, which will allow for three cars in what would traditionally be just one parking space.  Parking will be accessed at Richard Street.

At downtown’s southern edge is the site of the proposed Iris development.   The Iris will be six-stories with 60 units on 700 South between Main and State Streets.  The Iris replaces a vacant lot and one-story commercial building and will consist of a concrete podium and five wood-framed floors.

Like The Charli, The Iris will utilize stacked parking.  The south portion of the podium will be reserved for the building’s lobby, fitness center and a small outdoor courtyard.

The Iris joins an increasingly vibrant block that includes the 600 Lofts, a six-story residential mixed-use development at the northeast corner of the block, and the State Room event venue at the 600 South block of State Street.

For both projects, the developers cited the neighborhood’s industrial past as the inspiration for their designs.  Both exteriors will feature a mix of concrete, brick and metallic materials with extra large dark-framed, ground-floor windows.

The developers are going through the Conditional Design Review process for both projects, requiring final design approvals from the Planning Division before construction can begin.  Last week the Salt Lake City Planning Commission approved the developer’s Planned Development request to build The Birdie, a proposed six-story mixed-use development at the southwest corner of the 200 South and 200 East intersection.