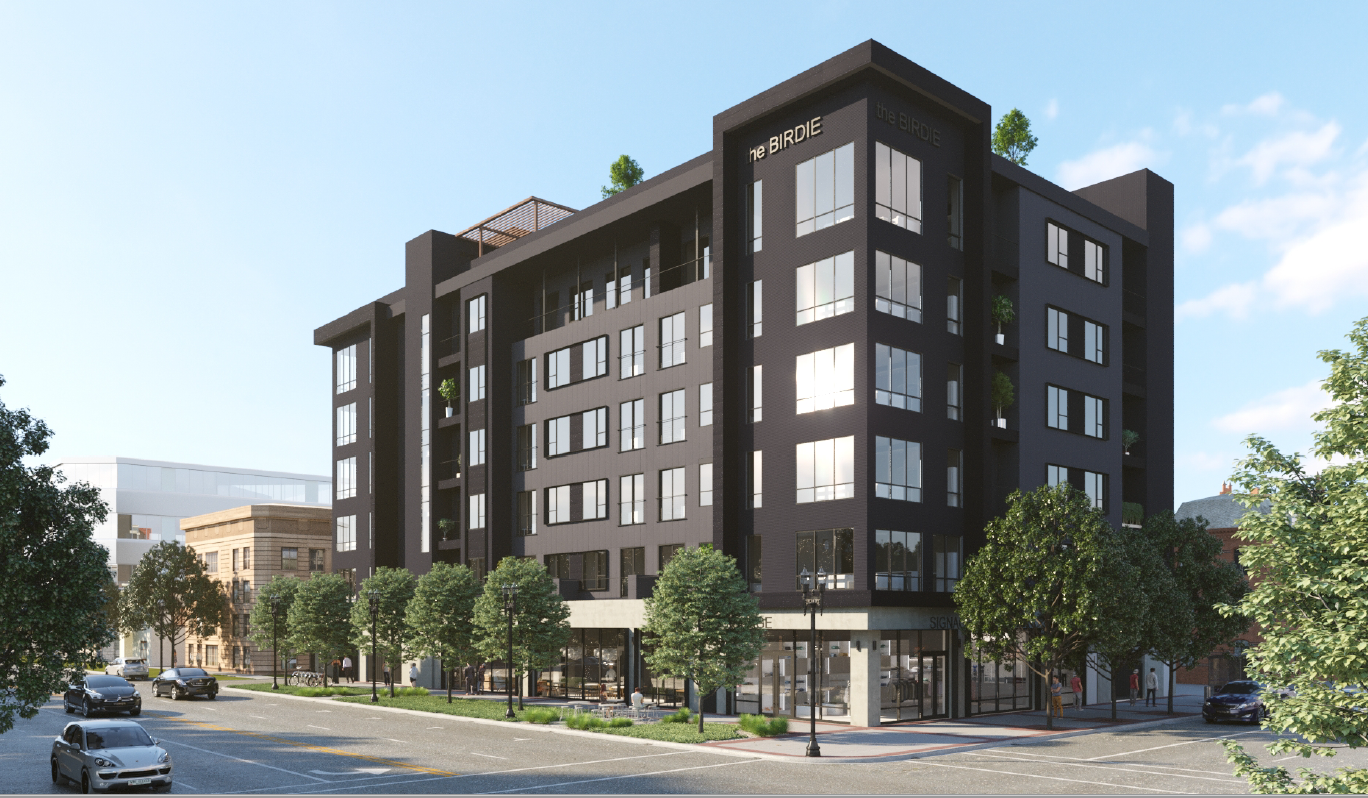 Usually, when a developer goes before the Salt Lake City Planning Commission for a height variance, they are requesting additional height.  But developers, CW Urban have argued that building up to the minimum height requirement for a small downtown corner lot would be too difficult.   And during Wednesday’s commission meeting, commission members agreed, unanimously approving the developer’s Planned Development request to build a scaled-down mixed-use project at the southwest corner of the 200 South and 200 East intersection.

That project, The Birdie, will be six stories with 70 residential units.  The Birdie will top out at just under 85 feet, 15 feet under the minimum height requirement of 100 feet for corner parcels in the D-1 (Central Business District) zoning district.  The project will replace a surface parking lot on 0.34 acres.

Planning staff determined that the intent of the zoning requirements was to ensure that corner buildings have prominence at the intersection.  Staff argued that The Birdie would have prominence based on its planned ground floor activation, large balconies and architectural relationship to the intersection’s two historic buildings, the Stratford Hotel (2nd and 2nd) building and First Methodist Episcopal Church.

“I feel like 2nd and 2nd is a really important corner,” said Jake Williams of CW Urban.  “We really wanted to be inspired by the neighborhood.  These buildings all have eclectic textures.”

Williams told the commission that CW Urban wanted The Birdie to compliment the mix of historic and contemporary buildings in the area.  To do this, the project will have dark-framed windows that are common on this stretch of 200 South.  The ground floor will also be visually different from the upper levels with a lighter shade of concrete to create a greater emphasis on the street level features and different building materials.

No one spoke for or against the project during the public hearing portion of the commission meeting.  Though staff noted that the Downtown Community Council expressed disappointment in the proposed building height being under 100 feet.

“We hope to be a community within the second and second community, we feel like it really fits to the context of the other buildings around and adds vibrancy to this corner,” said Williams.

The residential portion will be slightly set back from the podium level.  The units will be a mix of studio, one and two-bedroom apartments.   The rooftop plaza will occupy most of the roof level and will include outdoor lounge areas, barbeque and fire pits.

The project will have one parking stall per unit.  To maximize the amount of parking available the developers will use stacked parking, which will allow for three cars in what would traditionally be just one parking space.  The parking podium will be accessed from 200 East and will have 63 stacked stalls and seven surface stalls.

CW Urban argued that because of the narrow width of the parcel, building taller would require more parking at the expense of providing ground floor retail and that the stacked parking was necessary to allow for active ground floor uses at the podium level.

“At 87 feet, I don’t feel like we are losing a ton and I think that those changes really make it feel prominent and important,” said Commission member Amy Barry.

The Birdie is one of three mixed-use projects in development for the 200 South block of 200 East.  Just south of the Birdie site is the Morton, an eight-story mixed-used building. The Morton, by Seattle-based developers, Timberlane Partners has topped out at and will include 137 residential units and 1,400 square feet of ground-floor retail space.

Across the street from the Morton is the site of the proposed Moda Luxe,  a nine-story mixed-use development that will include ground floor retail and 220 residential units.  As with the Birdie, the Moda Luxe’s developers, JF Capital, are requesting a height variance, but in this case, the developers are asking to build up to 108 feet, instead of the 100-foot maximum height limit for mid-block building.