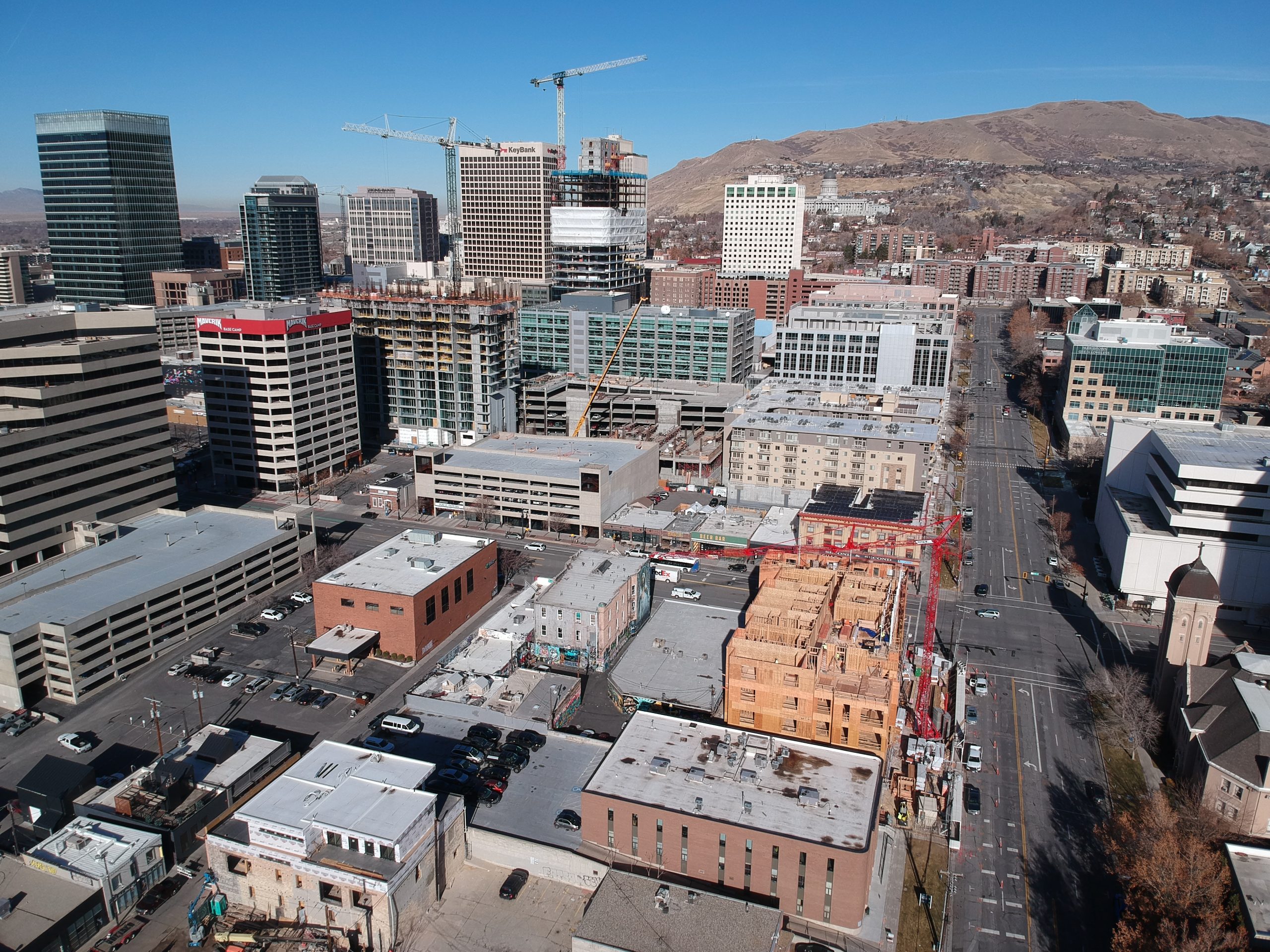 This story is free for non-members because it is about significant policy changes that the public should know about. Consider supporting this local news source by becoming a member.

In response to the rapidly changing look of the Utah capital’s urban center, Salt Lake City planners have proposed updates to allow higher buildings that can be constructed without needing to go through an extra layer of permission from the city.

But the proposed changes aren’t all about making taller buildings. The city aims to accommodate growth in the Downtown area and create more safe, livable public spaces at the same time.

“Changes seek to promote future downtown growth that is safe, aligns land use with transportation to reduce vehicle trips, and encourages downtown living,” planners wrote on a StoryMap detailing the project.

The proposed changes have implications for neighborhoods spanning from North Temple to Central 9th, from the size of parking lots to the amount of greenery and public space that’s provided, and therefore the size, shape and form of housing in the city’s most urban areas. Here’s what could change and how it came about.

Where’d this come from?

These proposed code amendments stemmed from a 2020 project in the Depot district on Downtown’s west side. Lehi-based Stack Real Estate asked the city to revise the Gateway-mixed use (G-MU) zoning district to allow heights of up to 190 feet for corner buildings — increased from 75-90 feet or 120 feet with design review approval.

But after fintech company Galileo decided to move to Sandy  because of the height limitations in Salt Lake City, the capital city was awarded a Transportation Land Use Connection Grant from the Wasatch Front Regional Council in 2021 to update the city’s zoning ordinance. Planners  focused on Downtown building heights and pedestrian engagement.

“We need taller buildings in Salt Lake City,” planning division director Nick Norris said in 2020 when the city was in the initial stages of revisiting its downtown building heights. “That’s just a fact with how limited land we have to provide all these great uses that we want. That has to happen. It is more complex than I think people think.”

Rather than focusing efforts only on the Depot District, the city went broad.

The zoning districts that would be affected under the proposal are the Downtown districts (D-1, D-2, D-3 and D-4), form-based district (FB-UN2), the general commercial district (CG) and the Gateway-mixed use district (G-MU).

In all of those zones, size and location limitations for surface parking lots are proposed, which are designed to support a highly walkable urban environment, according to a memo published by the city.

In all zones, open space regulation revisions are also proposed for spaces larger than 500 square feet. Those revisions would require more public amenities such as benches, tables, trees, paths and water features.

Changes in the Downtown core

In all four Downtown zones, setback maximums (not to be confused with minimum setbacks) are proposed for front and corner yards. That proposed change is designed to emphasize the urban feel of Downtown, and to reserve the setback area for more pedestrian-oriented elements.

Also proposed for all four districts are new midblock walkway standards that would increase walkability in alignment with the city’s Midblock Walkway Plan.

In the D-1 zone, buildings up to 200 feet would be allowed, with buildings over 200 feet requiring design review approval. Wind studies would also be required for any building over 150 feet to reduce potential wind tunnel impacts.

The building height distinction between corner and midblock areas would also be eliminated in the D-1 zone. This would be a move away from a longstanding practice that avoided creating “valleys” formed by tall buildings along streets in our most urban areas.

Increased building heights may also be allowed for projects that include a certain level of pedestrian-oriented elements, such as benches and open space.

The city would also incentivize the creation of more affordable housing units in the D-1 zone by allowing taller buildings if they include more affordable units. (This type of incentive is sometimes referred to as a density bonus.)

Under the proposed changes, the city’s zoning map for the D-2 zone may be adjusted in two areas:

Incentives for increased building heights for projects that include a certain level of pedestrian-oriented elements or affordable units are also proposed in the D-3 zone.

Changes in the Depot District

The allowable building height for the General Commercial (CG) zones in the Depot district and some portions of the Granary neighborhood would be increased from 75 to 150 feet under the proposal.

In most other areas of the CG zone, the allowable height would be increased from 60 feet to 75 feet. Outside of those specific areas in the CG zone, design review approval would be needed for buildings over 75 feet.

In the CG district, allowed building heights would be “directly linked” to outdoor usable spaces, with an aim to increase plazas, gardens, yards and other similar types of outdoor public spaces. Also in the CG zone, projects that include the maximum setback would need to provide pedestrian-oriented elements.

The city is proposing a major overhaul for the Gateway-Mixed Use (G-MU) district, with a reorganization that removed redundant and duplicate regulations that had already been included in other areas of the zoning ordinance.

The minimum building height for the G-MU district would be increased from 45 feet to 75 feet, and the maximum height would be raised from 75 feet to 180 feet. Those changes would allow for greater density in areas of the G-MU zone that contain public transit, according to the city’s memo.

The planned development process for new projects in the G-MU district would be scrapped under the proposal. Instead, design review approval would be required for any building over 75 feet, as well as buildings lower than the minimum height.

As in other districts, projects in the G-MU zone seeking to include the maximum setback would need to include pedestrian elements.

What does this mean for Downtown?

With 2,600 apartments currently under development downtown, the residential population in the area is expected to double over the next 30 months, according to a report from the Salt Lake City Downtown Alliance released last week.

Another 425,000 square feet of office space and more than 1,000 hotel rooms are also under development. The city’s hospitality sector is likely to continue booming in coming years, especially if the city is chosen to host the 2030 or 2034 Winter Olympics.

“I will take the opportunities and the challenges of growth over stagnation and decline that other cities around this country are facing. I will take that any day,” Salt Lake City Mayor Erin Mendenhall said last week during the Downtown Alliance’s 2022 State of Downtown event. “Growth is good for us. We’re making it good for us.”

However, the suburbs of the Wasatch Front are competing with Downtown Salt Lake City for office space, drawing companies away from the Downtown area, according to the Downtown Alliance report. Revising building height requirements Downtown could address that challenge.

Downtown residential growth is expected to continue through the rest of the decade, which means more opportunities for retail development, especially nightlife retail, such as concerts, performances and dining. However, labor shortages and liquor license shortages are hindering that development, the Alliance report said.

Housing affordability and availability is a challenge downtown, too. Vacancy rates at the end of 2021 were under 3 percent — the lowest in over a decade, according to the Downtown Alliance. If developers are able to build further skyward, more housing units will become available.

Building heights in the form-based zone (FBUN-2) will be capped at 50 feet. An extra 15 feet for corner properties will be eliminated, and properties that have already been approved for development in that zone would be allowed to build to 65 feet.

This is an apparent attempt at addressing recent backlash in the area southwest of Downtown against buildings that don’t offer more space for greenery.

Minimum dimensions for open space are proposed, so that the open space would be usable, and open spaces larger than 500 square feet would need to have some vegetation and amenities for people who live in the building. Requirements for trees on the street and in front yards are also proposed.

Setbacks in the FBUN-2 zone were adjusted to allow for more buffering and space between sidewalks and developments. Minimum lot widths and lot areas per building would be removed.

More details on the city’s proposals, including the full draft ordinances, are available at slc.gov/planning/2022/05/09/downtown-building-heights-text-amendments.