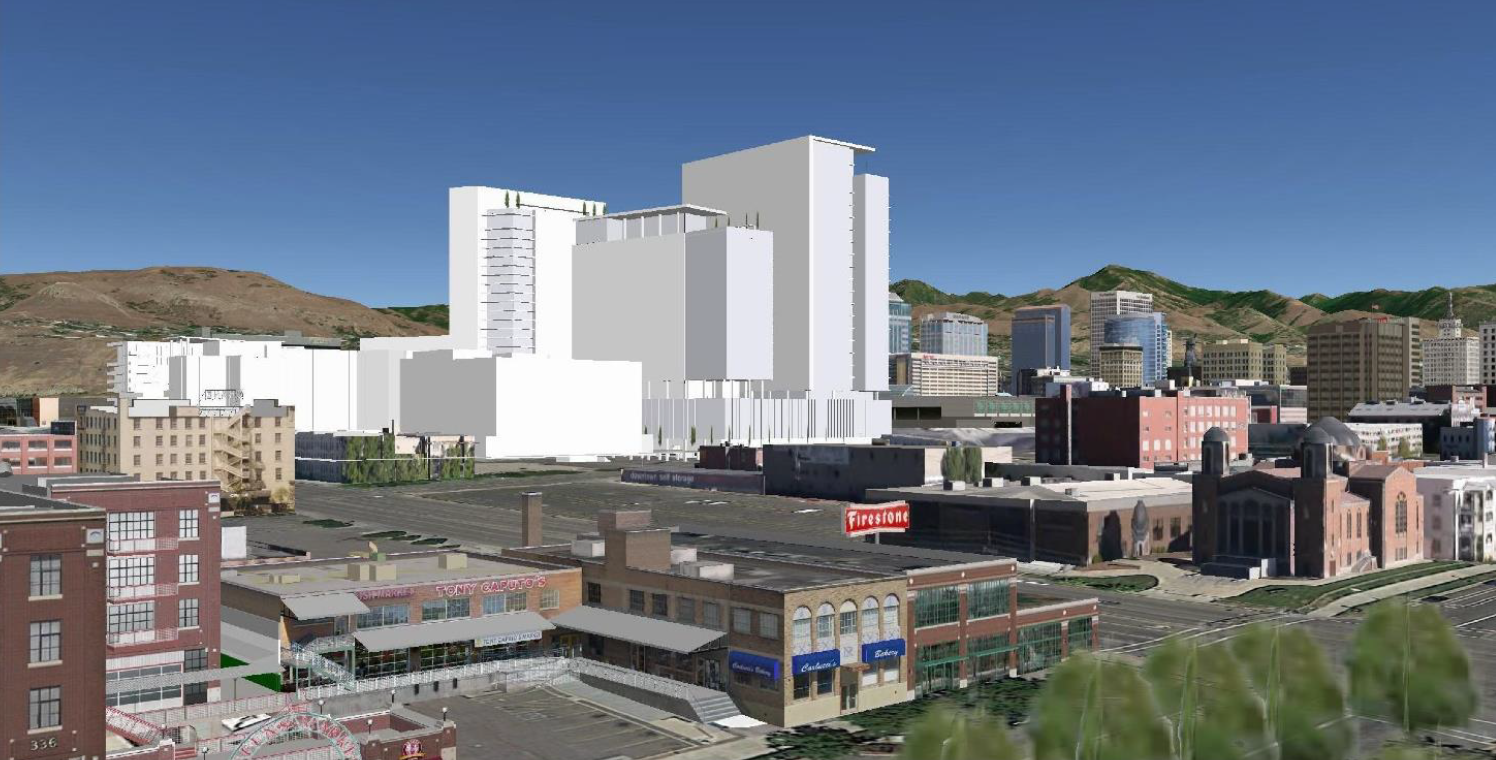 It is now up to the Salt Lake City Council to decide if more height is appropriate for the Convention Center neighborhood in downtown.  On Wednesday the Salt Lake City Planning Commission voted to forward a favorable recommendation for a zoning text amendment that would expand a height overlay to include the northwest corner of the 200 West and 200 South intersections.

Developers, The Ritchie Group, are requesting the zoning text amendment to allow them to build an office tower up to 375 feet as part of the second phase of their Block 67 development.  The parcels are in the D4 (Secondary Central Business District) zone which allows for building heights up to 75 feet and up to 100 feet through the Conditional Building and Site Design Review process.

The current height overlay encompasses the Salt Palace Convention Center and allows for building heights up to 375 feet on Convention Center property.  The council approved the overlay district in the D-4 zone last June.

“This is the type of density that that city is able to build; there is demand for office, there is demand for more hotel keys,” said Ryan Ritchie, of The Ritchie Group.  “The economic factors are in place to see the growth that we are seeing.  It’s the natural progression of all cities that as they densify you start to use the land more appropriately.  The best way for us to accommodate the growth over the next 40 to 50 years is through density.”

The commission approved a CBSDR for the project’s first phase in November.  The first phase will include two 11-story buildings that will replace a surface parking lot on the southeast corner of the 100 South and 300 West intersection.  When built out, the 6.45 acres at the northwest and southeast corners of the block will consist of multiple buildings with a mix of commercial office, residential and hotel buildings.

The second phase will potentially consist of a 30-story commercial office tower, an 18-20 story residential tower and a third shorter building that could possibly be another hotel.  Ritchie also noted that the second phase could also include the Convention Center Hotel if the current plans for that project fall apart.

The second phase will replace the Royal Wood Plaza building, parking structure and a surface parking lot.  The developers will break up the large project into four smaller blocks via a curved throughway street that will connect 300 West to 200 South.

Commission members and planning staff debated how the height of Block 67’s proposed office tower would affect the skyline.  The Downtown Master Plan and current zoning call for a pyramid skyline with the tallest buildings on between West Temple and State Street in the D1 (Central Business District) zone that allows for heights up to 375 feet and more through the CBSDR process.  Several commission members noted that the height allowance drops almost 300 feet from the D-1 zone to the D-4 zone and that the overlay district could help bridge the height in the D-1 zone to the lower buildings in the Depot District.

During the public hearing, residents from the Japenese Church of Christ, Salt Lake Buddhist Temple, Lumbini Gardens and the Asian Association of Utah expressed concerns about the proposed rezone and feeling like they have not had a voice in the planning process.

“We want to grow with Salt Lake City, but as you grow, diversity is very important,” said one resident of the local Japanese community.

Many representatives of these organizations cited the construction of the Salt Palace Convention Center in the 1960s and its more recent expansion as examples of development having a negative impact on their community.

“We have earnest intentions to be neighborly”, said Ritchie.  Ritchie told commission members that he has reached out to several neighbors on the block but has had difficulty getting specific feedback on what accommodations he can make.  Ritchie assured the commission that his team will continue to reach out to the different groups on the block as they finalize plans for the second phase.

Additionally, during their presentation to the commission, Ritchie cited multiple examples of churches interacting with dense urban development.  “Churches in urban spaces can be managed successfully,” he said.

With the favorable recommendation from the commission, the zoning amendment will now head to the city council for a final vote early next year.

“This project not only has an unprecedented opportunity to bolster renewed investments in the Vivint Smart Home Arena and The Gateway but really to create a cohesive downtown bridging what’s happening on Main Street with what’s happening in the west side of downtown,” said Jesse Dean, the Downtown Alliance’sdirector of urban development.  “We need more office product downtown.  This is an important aspect in terms of growing our economy.”