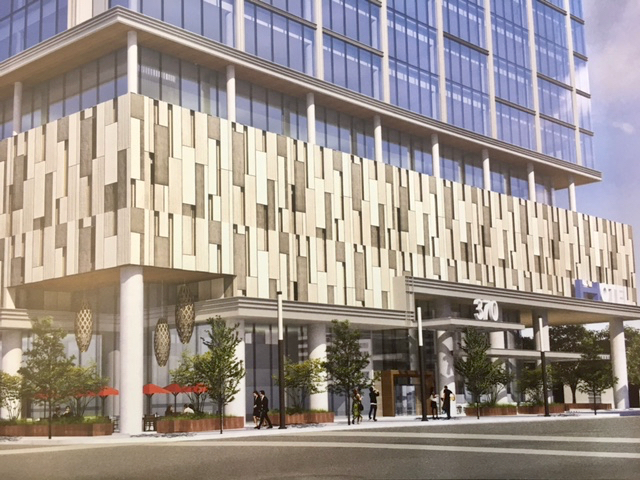 A long-vacant parcel on a prominent downtown corner is now getting a second chance and could soon be the home to one of downtown Salt Lake’s tallest buildings.  California-based developers, Held Properties plans to develop the large vacant parcel at the northwest corner of the 400 South and West Temple intersection.  The 1.38-acre parcel was the site of the former Void Corporate Center proposal.

According to Robert Held, the president and chief executive officer of Held Properties, the developers hope to start construction next year on a 27 story mixed-use building currently referred to as the 370 Millennium Tower.

“Every building in Salt Lake has a pre-millennial concept,” said Held, citing the city’s abundance of single-use buildings.  “People like the convenience of what we are offering.”

While the building’s design and specific floor plans are still being finalized, the proposed uses are already determined.  The 370 Millennium Tower will include a mix of commercial office space, retail space, a hotel and residential condominiums.

The project will consist of a six-story parking podium with groundfloor retail and restaurant space.  Atop the podium will be an amenity deck and the start of the actual commercial office space.  The amenity deck would be available to the building’s office workers, hotel guests and condo residents.  The amenity deck will include fire pits, jacuzzi, pool and outdoor event space.

As currently proposed, floors 6 to 17 will be reserved for commercial office space.  The hotel will occupy floors 16 to 25.  Floors 26 and 27 will have four luxury condominiums each.  According to the Held, the final floor count could increase a floor or two depending on how many residential units his company decides to build.  He said the residential component was added to take advantage of the 360-degree views the building will have as a southern anchor of downtown.

“We want it to be the best building in the city,” said Held.

The developers will not need to go before the planning commission as they do not plan to exceed the allowable height.  The parcel is in the D-1 (Central Business District) zone which allows for building heights up to 375 feet outright.  Developers can build taller than 375 feet by going through the Conditional Building and Site Design Review process, which typically requires planning commission approval.

Between 2013 and 2016 the site went through several different proposals under the previous owners, the VOID, a tech company based in Utah County.  The most recent of the proposals was a 22-story mixed-use building that would have included company’s corporate center and a hotel.

The 370 Millennial Tower will be Held’s first project in Utah.  Until recently, the family-owned company has developed commercial office buildings exclusively in the Los Angeles area.

“We fell in love with Salt Lake,” said Held.  “It’s got a very nice and clean downtown, good demographics and rapid transit.  It checks off all the boxes.”