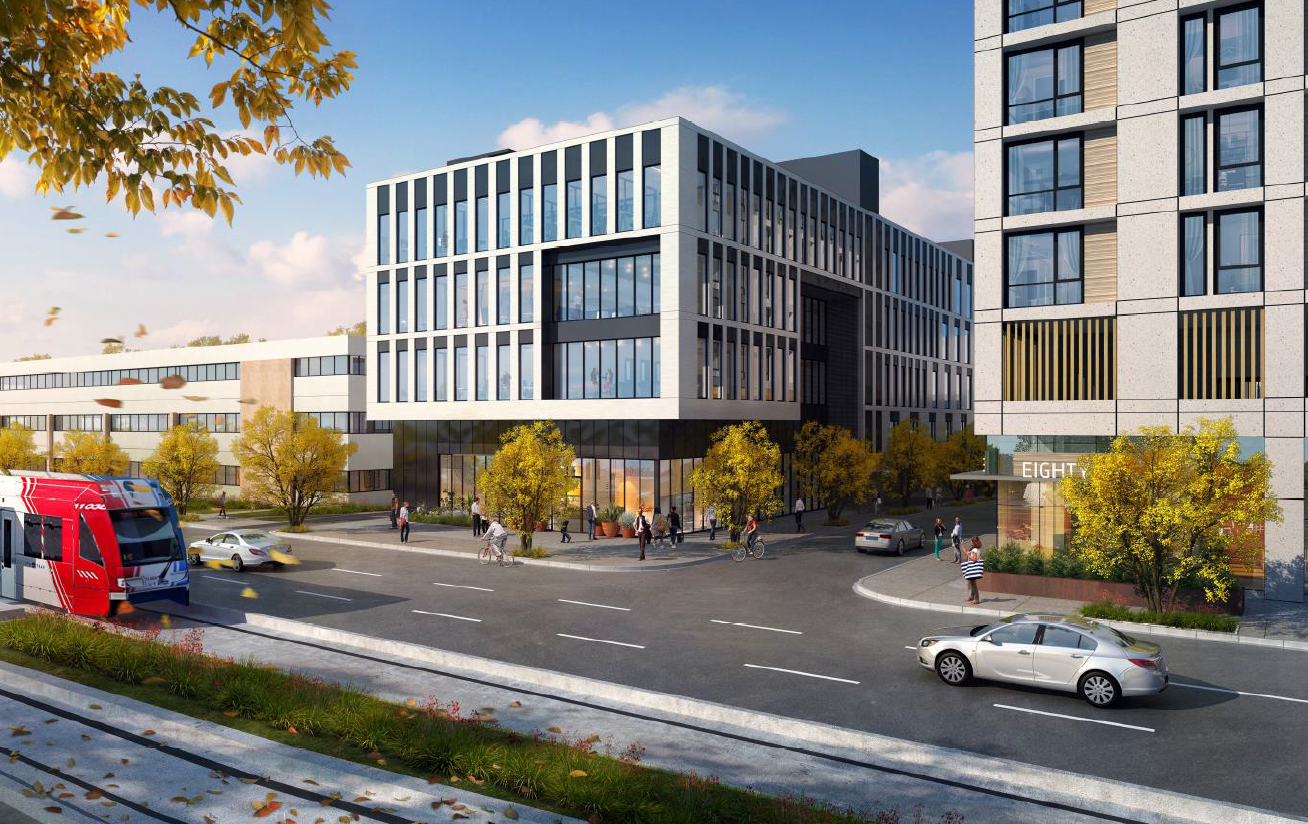 “This is proof why work sessions are so helpful,” said Commission member, Weston Clark.  “I think you really listened.”

The Exchange will take up more than half of the block, replacing the former Barnes Bank, Salt Lake Roasting Company and a two-story commercial building with the phase one and phase two buildings.  Both buildings will be mixed-use and have a combined 412 units, 20 percent of which will be reserved for residents earning at below 50 percent Area Median Income (AMI).

The second phase building, or Building B, will include 126 mixed-income residential units, 30,000 square-feet of coworking incubator space and 2,700 square-feet of ground-floor retail space. The five-story building will feature solar-powered mechanical and electric design. The developers went through the planned development and CBSDR process to receive a variance for parking lot landscaping requirements on Blair Street.

That first phase building, or Building A, will be nine-stories with 286 mixed-income units with 15,000 square feet of retail on 400 South and People’s Way, rooftop gardens and solar-powered heating and cooling systems.

Based on feedback from a work session with the commission in September, the developers have included a midblock walkway that will bisect the ground floor of the second phase building from Peoples Way, a small midblock street just east of the city’s civic campus.  Because there are no current development plans for the parcel to the east of The Exchange, the developers will restrict public access to the walkway until it can connect to 400 East.

Also based on previous commission feedback, the second phase building will include murals and other types of visual interaction on the building’s south and east façades.

The walkway and a lobby will break up the parking structure into two sections.  The parking podium will be just one story, below four floors of residential and office space.  The office space will occupy the north end of the building and will overlook 400 South and Blair Street.  The residential portion will overlook Blair Street, Peoples Way and the Public Safety Building.

The parking podium will be accessed from Blair Street.  In a separate application, the developers will be asking the city for permission to make Blair Street a one-way street to allow for easier access to the parking structure.

The commission approved the project’s first phase building in October.  That building will be nine-stories with 286 mixed-income units with 15,000 square feet of retail on 400 South and People’s Way, rooftop gardens and solar-powered heating and cooling systems.

The project is directly east of the Salt Lake City Main Library, the heart of the civic campus, and directly north of the Public Safety Complex.  According to Parker, the designs of both buildings were influenced by the Main Library’s architecture.  The developers plan to extend campus’ midblock pedestrian focus by activating People’s Way with retail and plaza space.

“We feel like this definitely meets the overall intent of some of the updates that were done on the TSA (Transit Station Area) zone to make 400 South and some of our larger corridors really meaningfully active and impactful,” said Chris Parker with the Giv Group.

Because of its proximity to the Library TRAX Station, both buildings in The Exchange development were required to go through the TSA Development Score Review process.  Despite both buildings scoring above the 125 points needed to avoid a CBSDR with the planning commission, the both phases of the project needed commission approvals because of proposed building lengths, street frontage and because the proposed height of the nine-story building exceeds the maximum height limit by 5 feet under the TSA-UC-C (Transit Station Area-Urban Center-Core) zoning district.

In July 2017, city officials announced the selection Giv Group and New York City-based Domain Companies to redevelop the city-owned parcels at the 300 East block of 400 South.

The developers have started the building permit process for both phases and expect to start construction in 2019.