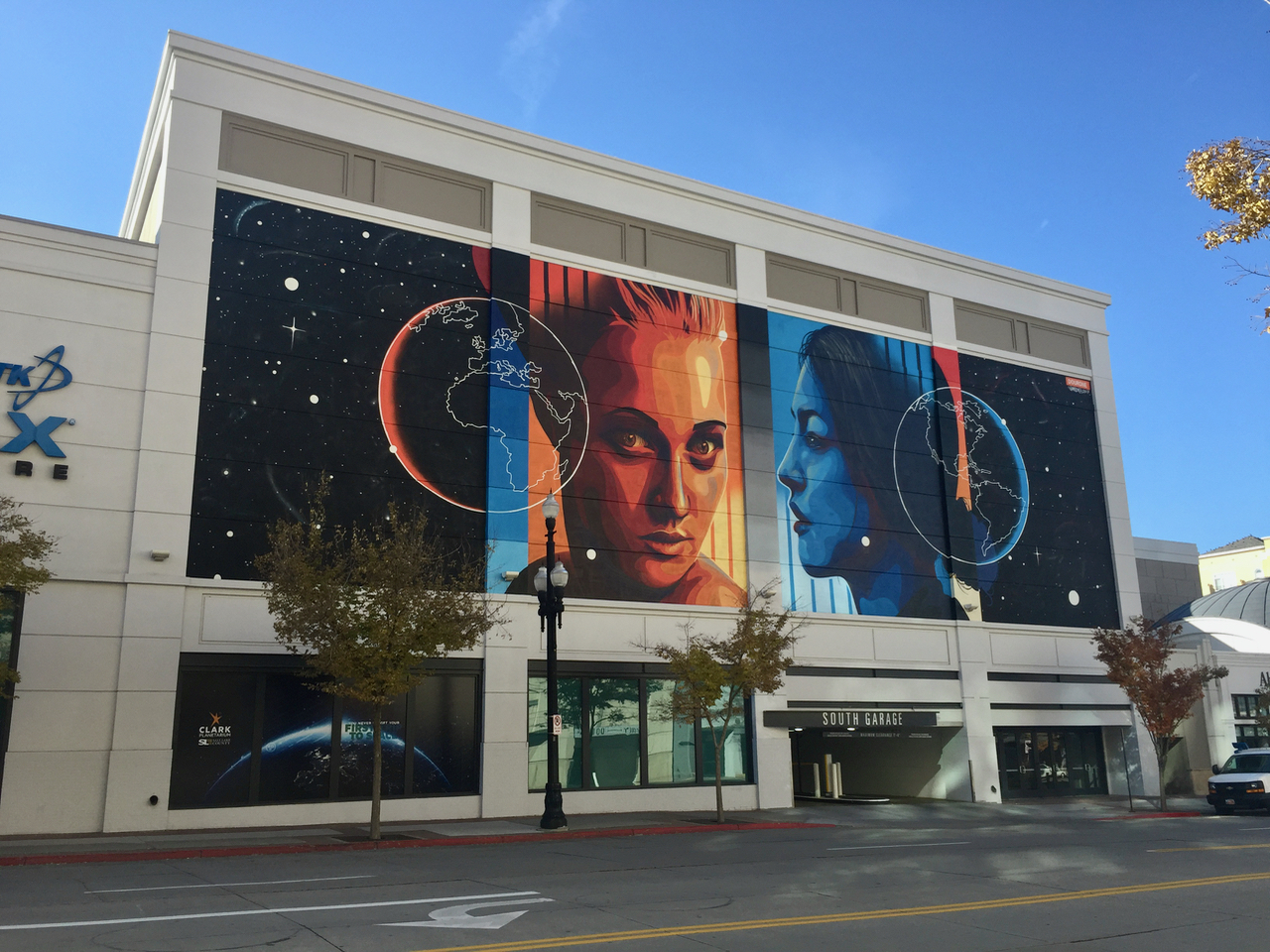 The Gateway’s reputation for beige monolithic architecture may soon just be a memory.  Some residents may have been disappointed when Vestar, the mixed-use center’s new owners, began repainting the buildings with neutral grays and whites, seeing it as more of the same bland palate.  But according, Bergendi Hatch the creative director at Vestar, the neutral colors were selected to serve as a blank canvas for one of Utah’s largest public art initiatives in state history.

“The Gateway is becoming much more experience driven with a focus on community and entertainment,” said Hatch.

Earlier this month, Vestar debuted two murals by international art collectives 2Alas and Dourone.  The first is across from the Planetarium TRAX station on 400 West and is by 2Alas, an art collective comprised of New Yorker Andrew Antonaccio and Cuban-born Filio Galvez.  The mural is titled “Loretta Young” after the Utah-born, Academy-award winning actress.  The textured mural is designed to visually change when viewed through a camera lens and according to the artists, it is a modern interpretation of what it means to be human in a heavily mediated society.

On the north face of the Clark Planetarium is Dourone’s “Two World Faces.”  Dourone, aka Fabio Lopez Gonzalo, started as a graffiti artist in Madrid and focuses his work on urban spaces.

Last week crews finished the installation of the Geometry Mural by Pantone below the sky bridge that rises above 100 South.  Pantone is Argentinian-Spanish artist that like Dourone, began his career as a graffiti artist in Spain.

Crews also recently completed the installation of the Topography Mural by Brendan Monroe, aka The Blob, on the southern sky bridge in front of the Urban Arts Gallery.

Work is also underway on an installation, Solidarity Mural, by David Flores on the north sky bridge that rises above Rio Grande Street near the fountain.  Flores, a native of California, is best known for his self-proclaimed “stained glass” and mosaic style.

Crews are beginning installation work on the Sego Lily Mural, by INSA, a British graffiti artist and a graduate of Goldsmith’s, London.  That installation will occupy the wall directly north of the entrances to Megaplex Gateway.

The second phase of public art installations will go up in the spring.

In addition to the large murals, Vestar has redesigned the Gateway’s clock tower by covering it with a large Times Square-style digital display and added several neon signs like the “Salt Lake City is for lovers” sign outside the Winter Parking Garage exit.  The company has also painted the Crosswalks on 100 South to resemble piano keys.  Over the summer the crosswalk was painted as a rainbow.

“This is about creating accessible art that means something different to each community.  You see communities build around art,” said Hatch.

While the Gateway has lost most of its retail tenants, the area dubbed as “restaurant row” is the center’s most leased out area and will soon add two new tenants including a pizzeria by MidiCi, The Neapolitan Pizza Company, across from Happy Sumo.  Dave and Busters, an adult-oriented gamed-themed restaurant, will replace the food court.  Food-court mainstay, Panda Express moved to the small restaurant cluster at the Gateway’s south end.  Vestar has also added lounge and play areas on the north and south ends of the mixed-use center.

“We wanted to create an urban playground where people find their moments to play and interact,” said Hatch.

As the Gateway transitions, the community around it is growing.  In 2017, two developments, the Alta Gateway Station and 4th West Apartments, added 774 residential units to a one-block radius of The Gateway.  There are an additional 650 units under construction in the immediate vicinity of the mixed-use center, with the Hardware Village and Skyhouse Lofts.  The surge of new residents in the vicinity could help Vestar create an 18-hour environment.

Hatch is optimistic about the Gateway’s future, citing the community’s investment in the mixed-use center. “Everybody is rooting for its success,” she said.