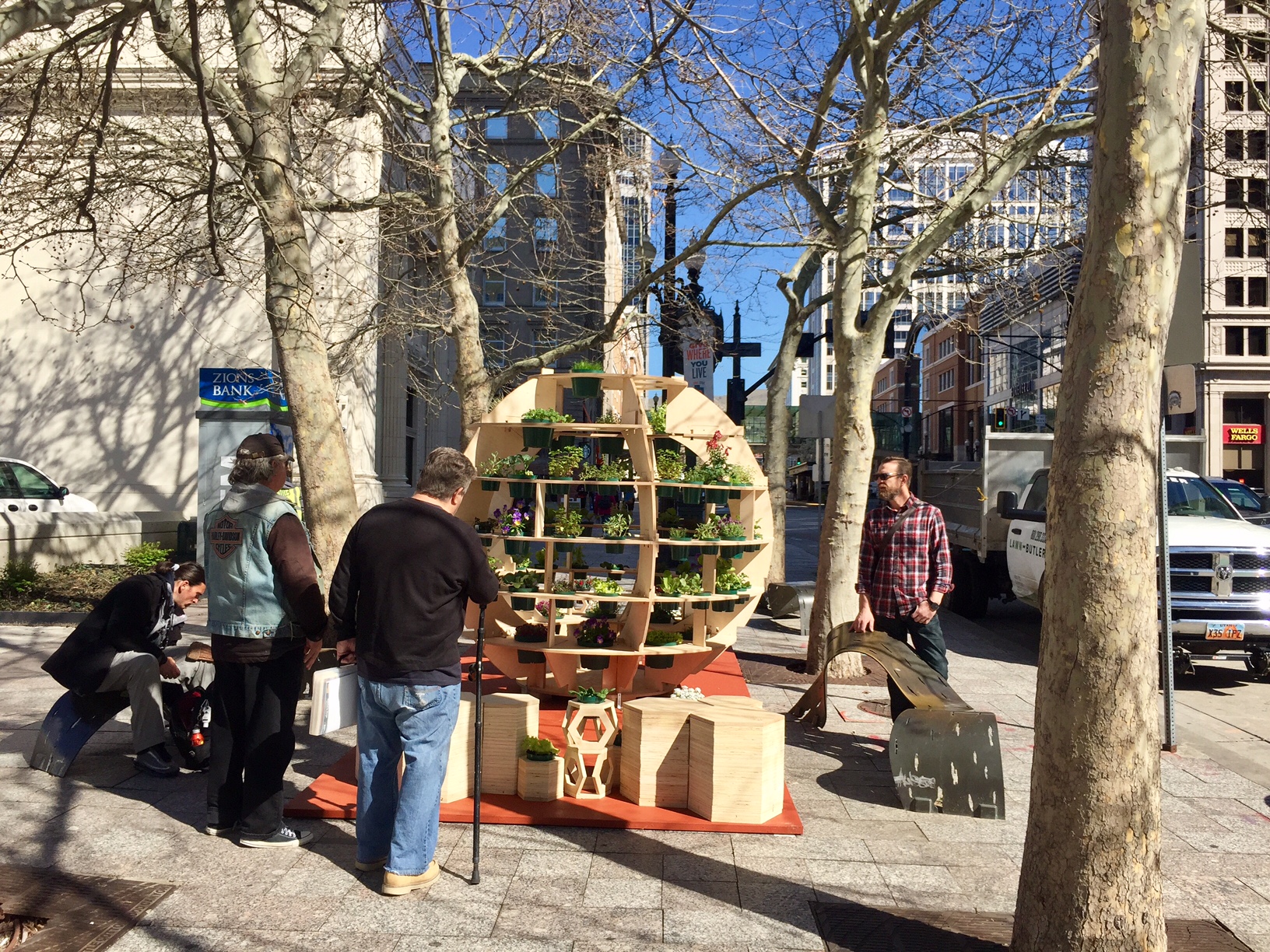 Just days before thousands of visitors will descend upon downtown Salt Lake for the bi-annual LDS General Conference, artists are putting their final touches on eight pop-up parks that for the next six weeks will add temporary outdoor public space to Main Street.

The park installations are part of the Downtown Alliance’s third annual Downtown Garden Stroll.   The alliance selected eight park designs out of more than two dozen proposals.  The selected public parks are staggered on three downtown blocks, between South Temple and 300 South.

“We are super excited about the revitalization of downtown Salt Lake and this opportunity to bring nature to downtown,” said Anders Piiparinen, brand and public relations representative for Cotopaxi, an outdoor retailer with a store on Main Street near the City Creek Center.

Cotopaxi was one of five sponsors of this year’s garden stroll.  Other sponsors included Salt Lake City, Utah Division of Arts & Museums, Goldman Sachs and the LDS Hospital.

The majority of this year’s parks focus on sustainability and Utah’s outdoors.  At least half of the installations incorporate either solar energy or sustainable food sources into their designs.

“I was inspired by the social concept of having plants and herbs growing in an urban environment where people can take what they want,” said Stan Sommer.

Sommer and his wife Laura built the Urban Grow Room park located adjacent to the historic Zions Bank Building on Main Street near 100 South.  The park features seating areas adorned with artwork by Laura and a tiered circular garden at the center.  The installation features dozens of different herbs and leafy greens ranging from cilantro to rosemary to various types of kale and lettuces.

Gerner, a full-time design student and the University of Utah, designed his installation to pay homage to Utah’s mountains with native plants scattered throughout and a rear wall with scattered color splotches used to represent mountain flowers.

“I want it to create an organic feeling where people can congregate in a personal way,” said Gerner.

There are pop-up parks at the following locations: South Temple and Main Street, City Creek Center Sky Bridge, Utah Arts Theater, KUTV news studio, Chase Building, Gallivan Plaza and 100 South and Main Street.  The park installations will be up until Mother’s Day, May 14.

*The author was a member of the selection committee for the Garden Stroll.