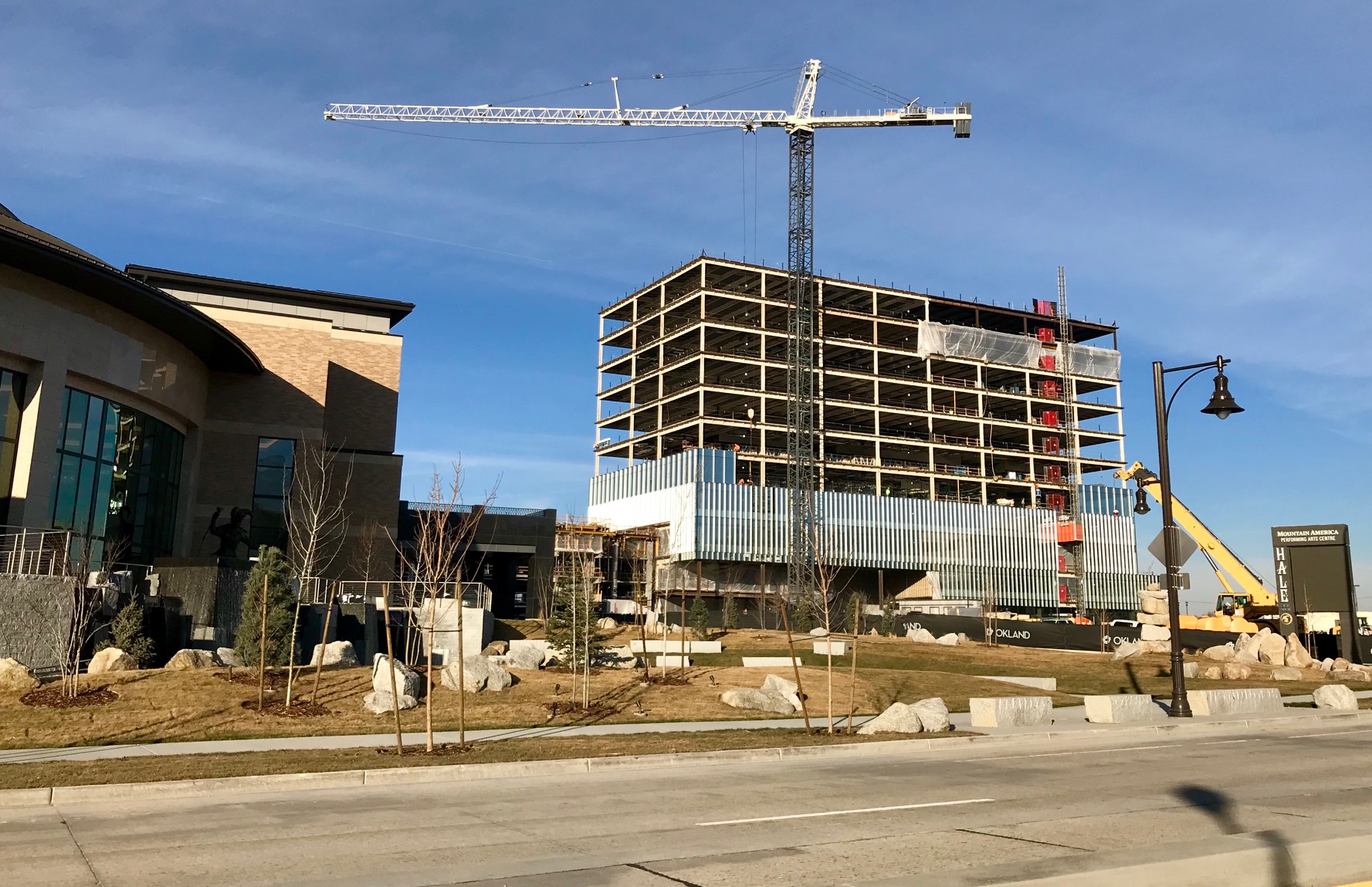 Sandy’s tallest building is now framed out and is nearing a late 2018 completion.  The 11-story tower on the 9900 block of Monroe Street, will add 327,000 square feet of commercial space to downtown Sandy and will serve as the new headquarters of Mountain America Credit Union (MACU) and be the centerpiece of a growing downtown.

The tower is one of several large projects underway or recently completed in downtown Sandy’s Cairns district, the area surrounding Sandy City Hall between Towne Ridge Parkway and 10200 South and Interstate 15 and TRAX.

In the past few years, the area has emerged as the second largest downtown in the region after Salt Lake, with the second highest number of residential units and leasable commercial space.  But a decade ago, most of the downtown area was mostly vacant and underutilized land.

“It takes relationships, partnerships and money,” said Nick Duerksen, Sandy’s economic and redevelopment director, at a January gathering for the Utah Chapter of the Urban Land Institute.

According to Duerksen, the city’s goal was to build a self-sustaining downtown core.  Duerksen argued that Sandy’s current downtown boom is the result of the city’s relationships with lenders and the city’s purchasing most of the land which allows them to use development agreements and have greater control over how the area is developed.  “(At first) We had to see ourselves as the developer,” he said.  “But the city’s getting more interest from developers that understand the city’s vision.”

City officials have also encouraged residential development in an area that had long only been home to a mobile home community.  In the past five years, the city has added almost 1,150 residential units to the Cairns district, the majority of which have been built directly east of the Sandy Civic Center TRAX Station.

Despite the boom, there are still issues to address in how downtown Sandy is growing.  The area now boasts a mix of uses, but there are still no mixed-use buildings.  The area is also ideally located next to both TRAX and FrontRunner Stations, but connectivity to those stations is limited as most of the new development is just outside of a comfortable walking distance from the fixed transit routes.  But without better connectivity, parking demands in the area remain high leading to many of the increasingly scarce parcels of developable land being used for parking instead of more active uses.

According to Duerksen, city officials are working to encourage more vertical mixed-uses in future developments and the city-owned lots that still need to be developed will require mixed uses.  “We are just going to have to do it ourselves to show that we can do it and that it works,” he said.

Duerksen alluded to the proposed Prestige project that will become the city’s tallest residential development and will several mid-rise towers with ground floor retail.  The developers of the Prestige can build up to around 25 floors, though the first phase looks to be around seven stories.  “We are a suburban downtown; we are not going to be Salt Lake,” he said.

Sandy officials are also collaborating with South Jordan officials to explore funding options for a circulator bus that would connect the South Towne Mall and area development to TRAX and FrontRunner.

“The goal is to move people around Cairns without needing a car,” said Duerksen.

As the Cairns runs out of vacant land, higher-density development is emerging in the downtown periphery.   Construction is underway on the first phase of the Arcadia Apartments, a five-story, 210-unit housing development.  The project is on the 8800 South block of Harrison Street (around 300 West) and its units will be income restricted.  While the project is located close to the interstate and 9000 South, it lacks transit connections and is 0.9 miles west of the closest TRAX Station.