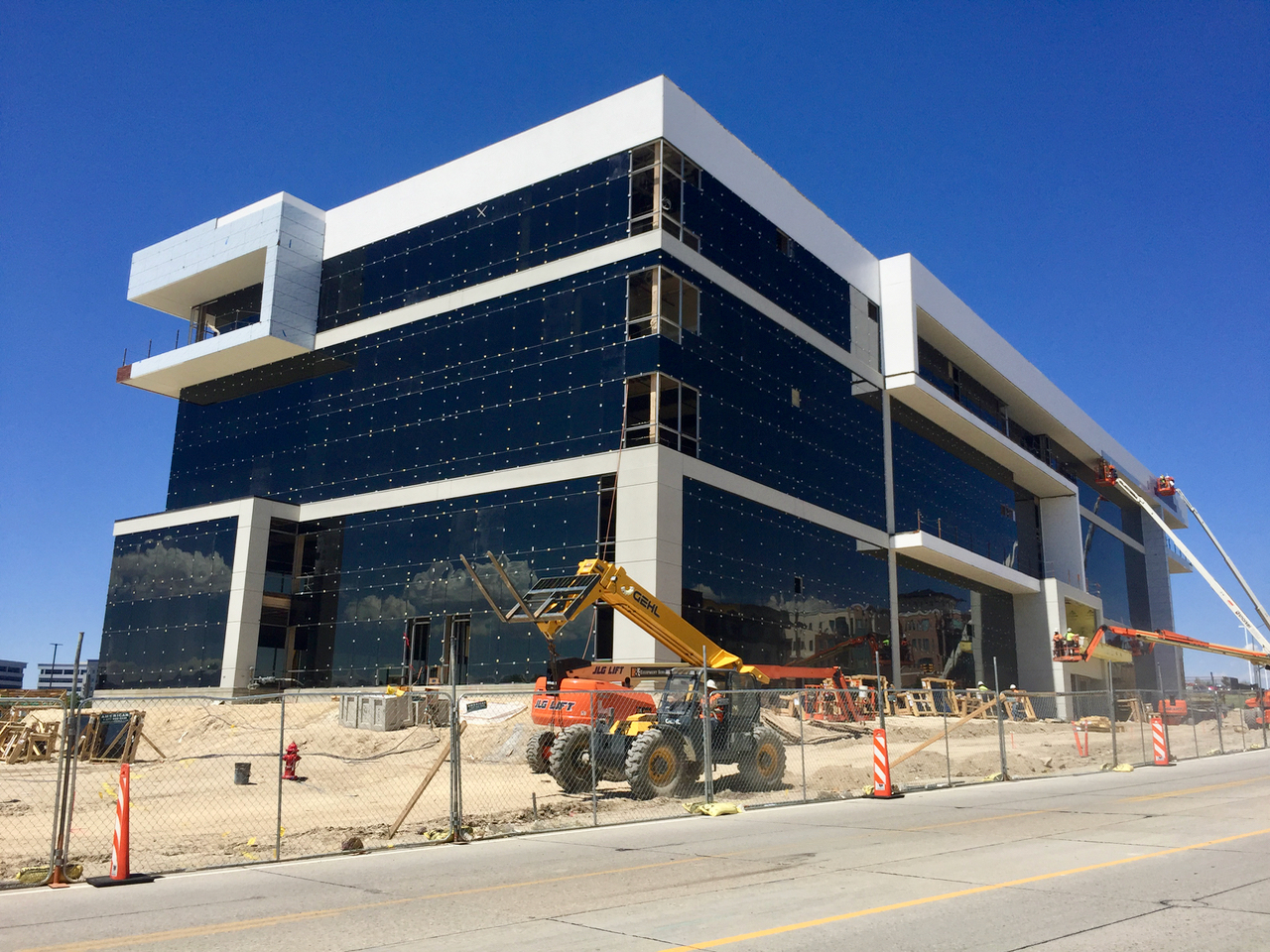 Salt Lake City is Utah’s urban center with the largest city population, downtown population and number of city workers.  But 15 miles to the south of the capital city, the growing downtown in the suburban city of Sandy has become Salt Lake County’s second largest urban center, trailing only downtown Salt Lake in commercial space and growth in multifamily development.

Yet, while both city’s downtowns have gaps in vibrancy, those gaps are more prominent in downtown Sandy serving as a reminder that density doesn’t guarantee vibrancy.

Despite these differences in vibrancy, both downtowns are attracting a lot of development.  While the majority of development in and around downtown Salt Lake is focused on multifamily projects, in downtown Sandy commercial development is leading the recent growth.

The Sandy Tower East, at the Beetdigger Boulevard and Sego Lily Drive, is nearly complete and is five stories with over 300,000 square feet of commercial space.

The other office tower underway, the 11-story future headquarters of the Mountain America Credit on the 9900 block of Monroe Street is actively under construction and will add 327,000 square feet of commercial space to downtown Sandy.

The Mountian America building will share a 1,800-stall parking lot with the under-construction, Hale Centre Theater directly south of the office building.  The 130,000-square-foot Hale Centre Theatre is framed out and will include to theaters.  Neither the Hale Center Theater or Mountain America Building will have good street engagement and the shared surface parking lot will separate the office tower from the sidewalk instead of occupying the rear of the building separating it from the nearby interstate.

In addition to commercial development, downtown Sandy has added hundreds of new units with hundreds more underway.   Construction recently finished on the Park at City Center, a 330-unit apartment building directly east of the Hale Centre Theater.  The five-story apartment building is single use despite the hundreds of new residents the project brings and the hundreds of workers from adjacent commercial buildings that must drive to reach any retail.  Unlike some of the other adjacent buildings, the Park at City Center goes up to the sidewalk but the block-long building has no active ground floor uses.

Another residential project under construction in the downtown area is the next phase of the East Village development, framing has started on that project that will add an additional 146 units to an area that has welcomed several hundred new residential units in the past three years.  As with the other nearby residential projects, the East Village development is adjacent to a TRAX light rail station but doesn’t engage with the station, with surface parking separating the station from the development and the developments ground floors fronting away from more active thoroughfares.

While city leaders in Sandy have been successful in attracting commercial office space and multifamily residential, these uses happen in separate, distinct buildings with no retail or eateries in walking distance of the district’s hundreds of employees and new residents.

Vibrancy is key to a healthy downtown.  As Salt Lake County’s second largest urban center, how downtown Sandy develops benefits the region as a walkable, vibrant downtown can serve as an example of smart growth that complements downtown Salt Lake.  Instead, the majority of new development in downtown Sandy lacks most of the characteristics of vibrancy defined by Ewing.  While there is arguably some imageability, the neighborhood lacks real enclosure, complexity, human scale and transparency as each separate building provides a single use and occupies a large footprint without any real active uses at the street level.