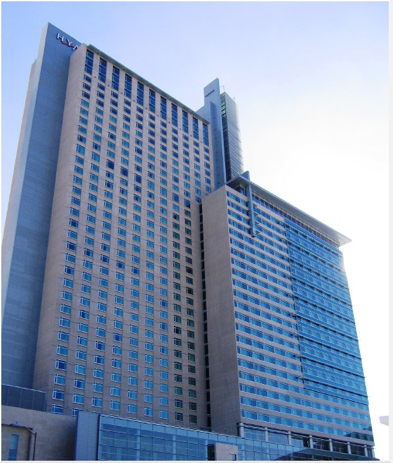 The Request for Proposals have been released and the search has finally begun for a developer to build what may become Salt Lake City’s next tallest skyscraper.  Salt Lake County officials released the RFP’s earlier this week in what is the first major step in the selection process of finding the right developer to build a convention center hotel.  The convention center hotel will need to be built within 1,000 feet of the Salt Palace Convention Center and include between 850 to 1,200 hotel rooms and ample convention space.  The RFP is needed because the new hotel will receive $100 million in tax incentives for providing the extra meeting space that will used by the convention center.

The The Hyatt Denver Convention Center Hotel has just over 1,100 rooms and it 37-stories tall.   Salt Lake’s convention center hotel could end up being even taller.  Based on the assumption that the hotel will be built on already available land (either vacant or surface parking) there are eight possible options where the hotel could be built.  Some of the available lots are very small, which could make for a tall and lean tower.  The two images below show which lots are within the 1,000 feet corridor where the hotel must be built and are either vacant or currently serve as a surface parking lot.

Denver’s Convention Center Hotel has a large base, the only current space available to construct a hotel with the same base would be the surface parking lot on South Temple between 200 and 300 West.   That lot is owned by the Church of Jesus Christ of Latter-day Saints.  The LDS church has made no mention of wanting to sell that lot.  The LDS church also owns the smaller lot next door at the corner of 200 West and South Temple which previously served as the staging grounds for construction workers, working on the City Creek Center.

Developers have until October 24th to submit proposals, with finalists announced shortly after and the winning developer selected by late November or early December.