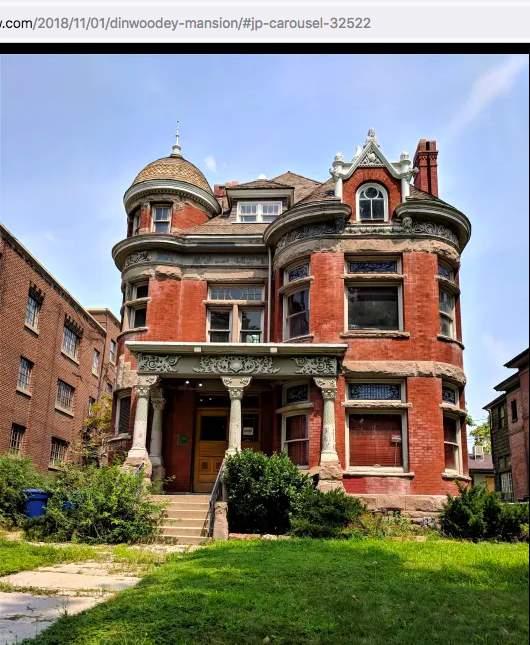 “These are Tear down dwellings that are necessary to build future apartment or condo buildings,” says the property listing for 419 East 100 South in Salt Lake City’s East Central neighborhood, just steps from Downtown.

The announcement highlights 419 E 100 S, known as the Weir House, at $1 million, but stipulates that “This building will not be sold standalone. It will only be sold in a package” – a $20 million portfolio that includes 70 apartment units spread across four buildings in “downtown areas,” and the Dinwoodey Mansion next door, at 411 E 100 S.

The Dinwoodey Mansion (also spelled Dinwoody), listed on the National Register of Historic Places since 1974, is a glorious mash-up of Queen Anne and Romanesque Revival styles completed in 1890. It was designed by the architect of the Utah State Capitol, Richard Kletting.

If a building is listed on the national register, it is eligible for federal and state preservation incentives. But it’s not protected from demolition. Listing on the local historical register would offer that protection.

The sellers indicate the only thing they value from the historic structures is the two-story stained-glass window in the Dinwoodey Mansion, which is not for sale.

The owner of the assemblage, Sequoia Springs LLC, looks to be a real estate investment fund liquidating some assets. They will only sell to a party that would be interested in a $20 million portfolio that includes 70 rental units – likely another investment company.

The real estate agent listed as seller told us “this is a private deal” and refused to provide information on the seller or portfolio unless we were a “qualified buyer.”

The parcel, and the surrounding neighborhood, is zoned R-MU Residential Mixed Use, with a maximum height of 75 ft and no minimum lot area.

Kerfuffle in the neighborhood

Both Preservation Utah and the SLC District Four Residents Facebook pages were alert to the demolition plans, with exasperation a common theme.

“This is the environment the city’s failed housing policies are propagating: demolition of all classes of existing structures in favor of ticky-tacky multiunit new beige construction,” Nicholas Rupp, who initially posted the alarm, wrote. “It’s an environmental and cultural character disaster.”

Preservation Utah, the non-profit organization formerly known as the Utah Heritage Foundation, posted that “we were shocked (horrified) to read this real estate description which assigns ‘tear down’ status to several of Salt Lake City’s finest historic buildings.”

East Central preservationist, landlord, and former planning commissioner Cindy Cromer told Building Salt Lake that “The city is pouring gasoline on the development frenzy.” She queried, “What are we getting out of this – market rate housing? It’s not enough.”

The Dinwoodey Mansion application to the national register of historic places prepared by the State Preservation Officer in 1973 calls the building “one of the state’s most beautiful Victorian style homes,” stating that it was built by the carpenter, furniture magnate, and polygamist Henry Dinwoodey for his third wife, Sara Kinersley.

The proposed tear-downs come in a climate of change. The city is working on liberalizing its RMF zones – a move that will increase the likelihood that historic buildings like 411 and 419 E 100 S will be demolished. In many cases it will be for residential units that are more intense, more expensive, and of lesser quality than the buildings they replace.

Does Mayor Erin Mendenhall think that buildings like this deserve more protection from the city? Does she have any intention to seek further incentives and/or rules to prevent teardowns of historic buildings? We asked City Hall.

Lindsey Nikola, the Mayor’s spokesperson, noted that the city has incentives in the RMF-30 revision for the reuse of existing buildings, “but does not make it a requirement.” She mentioned the city’s preservation plan and pointed to the Administration’s “updating regulations that would remove barriers like use restrictions and density limitations to promote the reuse of historic buildings.”

The fairly muted response from the Mayor’s office concluded, “It is, however, up to a property owner to petition the city to landmark structures such as these.”