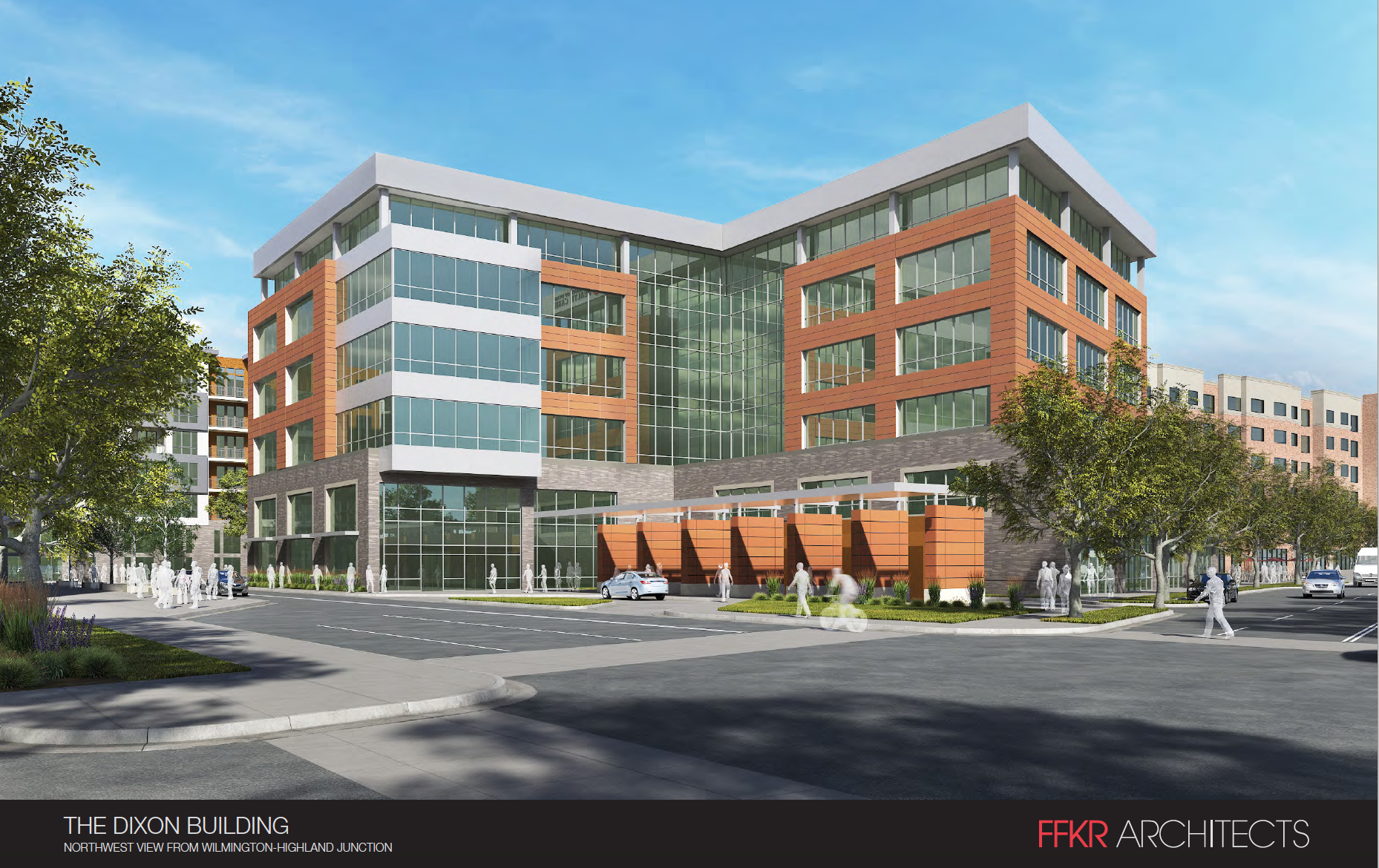 Another contentious Sugar House project by Craig Mecham Management is moving forward.  The Salt Lake City Planning Commission approved with conditions a Conditional Building and Site Design review request for the Dixon Medical Building.  The developers will need to return to the Planning Commission at a later date for final approval of ground floor design features.

The Dixon Building will be directly south of Mecham’s Vue at Sugar House Crossing development on Highland Drive.  The project will be six stories with nearly 180,000 square feet of office space with three levels of subterranean parking with 445 parking stalls.

While no tenants have been officially signed, the developers expect that the building will likely house an ambulatory clinic and medical offices for University of Utah Healthcare.

“This is a complicated project,” Judi Short, the land use chair for the Sugar House Community Council.  “I’m not a fan of the building, we’d really like something that doesn’t look like a big building that lives in Sandy.”

The project will include a private road that will essentially be an extension of Wilmington Avenue.   The road will be open for public use but will be managed by the developers.  The project will also include pedestrian walkways that connect Highland Drive to the Fairmont streetcar station and provide midblock connections to both the streetcar station and Monument Plaza.  As was with the adjacent Sugarmont Apartments the commission approved in August, a certificate of occupancy won’t be given to the Dixon building until the roadway and walkways are completed and ground floor details receive final approval from planning.  The city is also requiring both projects to include wayfinding for pedestrians to navigate the block.

“The main focus of this site plan and working with the Sugarmont Apartments was to really create a continuous experience for pedestrians as they’re moving from public transportation to the heart of Sugar House,” said Christina Haas of FFKR Architects.

Mecham’s team has worked with Boulder Ventures and their Sugarmont Development to integrate the Wilmington Avenue extension with both projects.  The collaboration is a shift from years past when Mecham built a fence between the Vue and Boulder’s retail properties to the west.  The fence angered residents and city officials and impeded pedestrian connections between the streetcar station and Monument Plaza.

The roadway directly south of the Vue will be replaced with a pedestrian plaza connecting the Dixon building to the Vue.  The Vue’s south parking entrance will be accessed from the Wilmington Avenue extension.

The project will add 3,500 square feet of public space, including two plazas on the north and south sides of the building.  The building’s northern portion built up to the sidewalk level with storefront entrances on Highland across from the Vue.  The southeast corner of the building will be set back to accommodate a small plaza.  The building also includes a 15-foot setback at floors three to six, to break up the building’s scale.

A key point of contention between residents and Mecham was how the Dixon building would interact with The Bar in Sugarhouse.  The Dixon building will wrap around the 0.05-acre bar property that sits directly east of the Dixon building’s main entrance.  Mecham’s team originally proposed a wall separating the bar from the plaza and entryway, but residents complained that it blocked off the bar.  Planning staff agreed and requested that the developers remove the wall.  Instead of a continuous wall, angled wall segments will separate the bar from the plaza.

“We recognize that the bar is really a beloved part of Sugar House and people feel very strongly about its presence in the neighborhood,” said Hass.  “Closing it off with a large wall was not going to work for the community.”