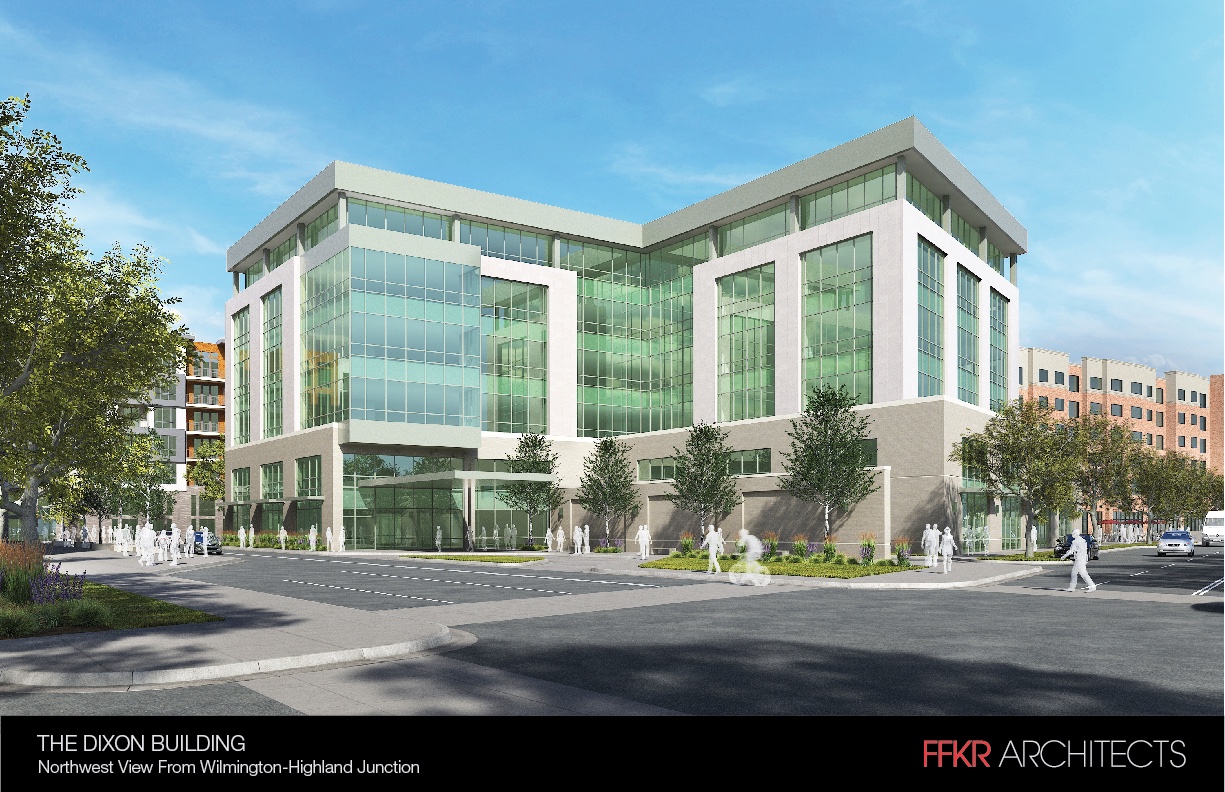 The retail and residential developments have dominated the recent growth in the Sugar House Central Business District.   Nearly six hundred residential units and retail square footage in the thousands have been added in a one-block radius of the Sugar House Monument Plaza, considered the heart of the neighborhood at the intersection of Highland Drive and 2100 South.

Craig Mecham Management, the developers of the largest of the area’s recent developments, the Vue at Sugar House Crossing, want to add more office space in the area with the proposed Dixon Building directly south of the Vue on Highland Drive.

On Wednesday, representatives from the project’s architects, FFKR Architects, presented updated plans for the Dixon Building to the Sugar House Community Council.

The Univeristy of Utah currently operates a health center on Wilmington Avenue, a block east of the proposed site of the Dixon Building.

As currently proposed, the Dixon Building will be six-stories with nearly 150,000 square-feet of office space.  The project will include three levels of subterranean parking with 445 parking stalls.  If the project is indeed a health clinic, a valet and patient drop-off will be included at the southeast corner of the building just of Highland Drive.

The project will be built up to the sidewalk with storefront entrances on Highland the north side of the building across from the Vue.  The building will be set back 15 feet at floors three to six.  The setback area will be used as outdoor patio space on the third level.

Mecham has worked with Boulder Ventures, the developers of the proposed Sugarmont Apartments, to extend Wilmington Avenue through the block connecting to McClelland Street.  The street will be privately owned and maintained by the developers but will be used as a public throughway.

“We have tried to orient the property toward the streets for pedestrians,” said Christina Haas of FFKR Architects.

According to Haas, all sides of the Dixon Buiding will be built to be inviting residents.  The developers will include site walls to screen the rear service area.

“The back of the building is essentially a front door for residents,” said Haas.

Mecham plans to incorporate 3,500 square feet of public space into the project.  The street directly north of the Vue will be closed and converted to a pedestrian plaza connecting the Dixon Building to the Vue.  That street currently connects the Vue’s south parking entrance to Highland Drive.  Parking for Vue and Dixon Building will be accessed from the proposed Wilmington Avenue extension.

The project will include wayfinding signs and interior pedestrians connections that will guide pedestrians leaving the Fairmont streetcar station at the southwest corner of the block to business along Highland Drive and 2100 South.

Site plan renderings suggest that the fence will remain but the pedestrian access points planned as part of the Sugarmont Apartments will ensure a continuous mid-block pedestrian connection between the streetcar station and Monument plaza.