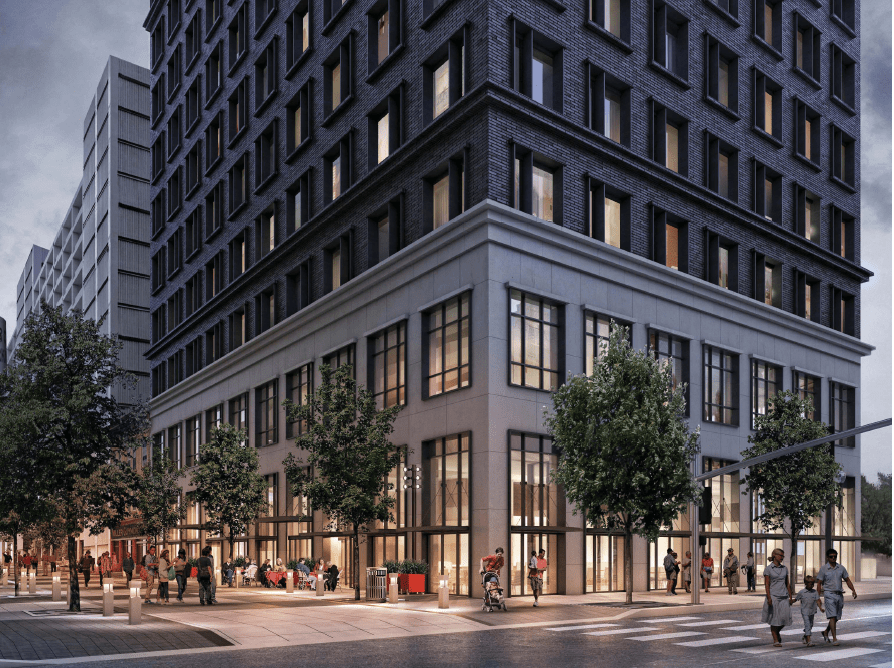 According to Dave Ward, a partner in the Boyer Company, the developers are still very interested in developing the property and are currently re-energizing their efforts to put together a proposal that addresses the current market conditions while being respectful of the proposed surrounding developments such as the year-round public market.

The RDA selected LandForge and Community Partners to develop Parcel 2, the Serta Mattress building.  According to Walz this option to Purchase Agreement expired and was not renewed.  The next steps for this parcel will be to re-release an RFQ after the city moves forward on Station Center infrastructure improvements.

Derek Allen, President of LandForge, indicated in an email that his team is still excited about the long-term prospects for Station Center.  Their vision of the Serta Mattress Building is as a backdrop for a public gathering node on axis with the planned festival street on 300 South between 500 West and 600 West.

According to Walz, the proposed improvements include the reconstruction of 300 South into a festival street, the addition of interior streets to break up the large block sizes and the creation of public open space along the north and south ends of a new section of Woodbine Court (approx. 550 West).  RDA staff designed Woodbine Court to be bookended by two historic structures, the already-completed Artspace Macaroni Flats and the Serta Mattress building. The public infrastructure improvements would also include the upgrade of utilities to accommodate the planned increased density of the neighborhood.

The RDA is exploring offering the parcels to be developed at a reduced price in exchange for developers funding the infrastructure improvements.

Only one project in the Station Center Project Area has been completed, the Artspace Macaroni Flats, a historic warehouse conversion on the 200 South block of 500 WEst.  The flats include eight street-level commercial spaces and 13 loft apartments which are available exclusively to people making up to 80 percent AMI.  The project is located between parcels 1 and 5 in the site plan above.

Conceptual rendering of the proposed Utah Museum of History, Heritage, and Art that be included in the Station Center project area.

The now dead State Street Plaza project was to have been a 180-unit mixed-income project. It replaced several single room occupancy hotels that were used by residents transitioning out of homelessness.

Financing and construction issues killed the project that was already under construction. In October the RDA purchased the property a second time for $4 million at a foreclosure auction.  The existing construction will need to be demolished and the RDA will seek new development proposals for the site.

The city is still looking at this project as part of the to-be-built affordable housing portfolio they are actively developing.  According to Walz, the RDA has completed the acquisition of this property and will be releasing a Request for Qualifications (RFQ) in January 2018.