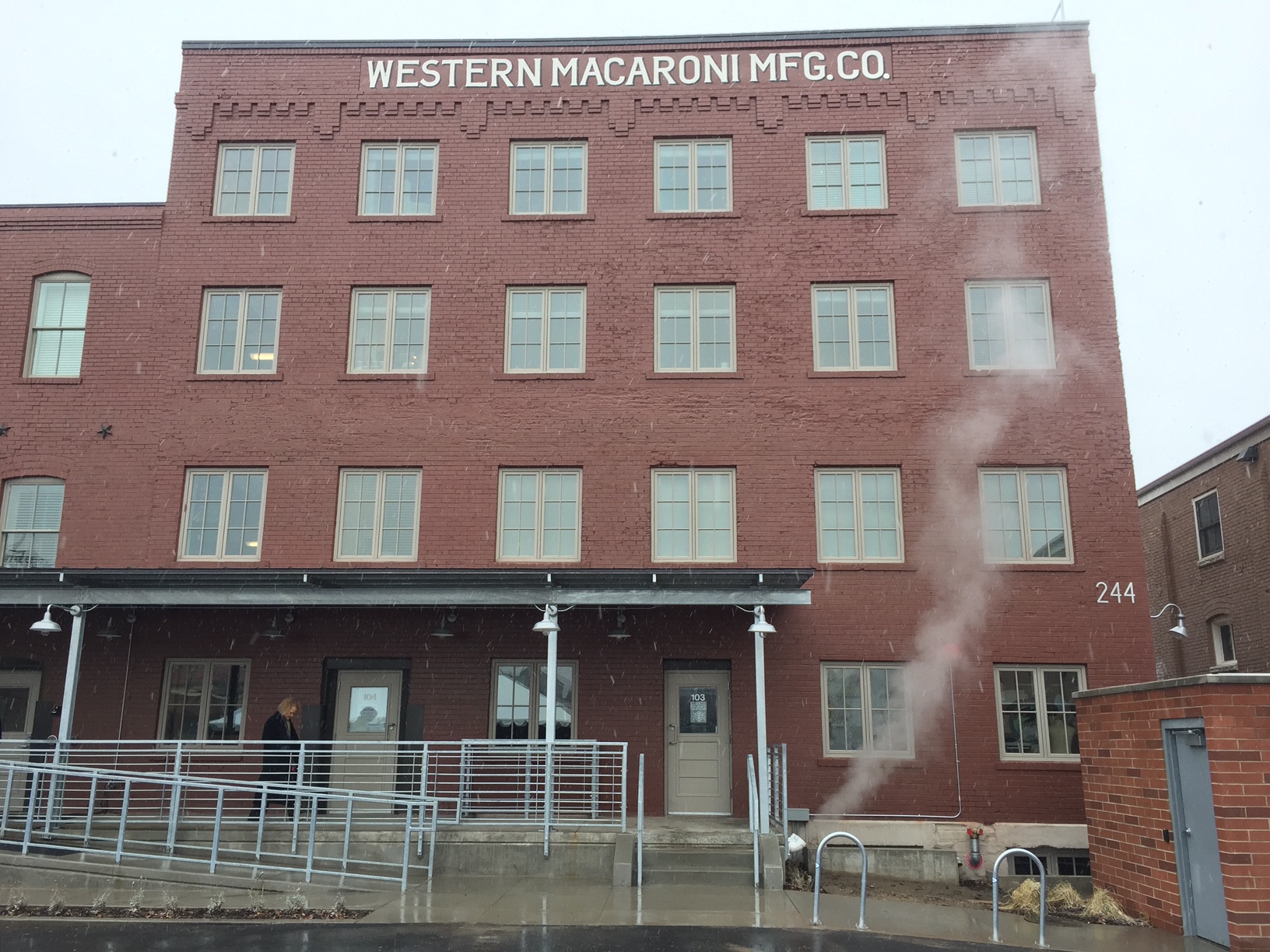 The first phase of the Station Center development area is officially open.  City officials joined representatives from Artspace to for a ribbon cutting ceremony to mark the completion of the Macaroni Flats a mixed-use development on the 200 South block of 500 West.

“This was not an easy project,” said Artspace President Jessica Norie.

Macaroni Flats is an adaptive reuse of a historic warehouse.  The project is the result of collaboration with the Redevelopment Agency of Salt Lake and Artspace, a nonprofit that works to provide affordable and energy efficient live/work spaces for artists, nonprofit and community organizations.  The project consists of a four-story building with ground-floor commercial space and three floors of residential.  The project has eight street-level retail spaces and 13 one and two bedroom apartments on the upper floors, including two-story loft-style apartments occupying the third and fourth floors.  The residential units are reserved for residents earning at or below 80 percent AMI (Area Median Income), currently set $40,450 for a single-person household.

The building is on the National Register of Historic Buildings and was originally built in 1900 as the home to the Western Macaroni Manufacturing Company.  Because the building is historically protected, there were limitations to the type of renovations that could be made.  For example, the windows on the second floor of the two-story units are much lower the industry average, because the original windows had to be preserved.

“I love the concept, it has great neighbors,” said Tara Latham, a tenant of one of the ground-floor commercial spaces.  “For a small space like this, it is normally really hard to get this kind of character in 500 square feet.”

Latham is the owner and creative director of Sugarhouse Creative, a locally-based technology and apparel design firm. Latham relocated her business to Macaroni Flats from warehouse space in Sugar House.  As with other Artspace projects, Macaroni Flats’ commercial spaces are reserved for local artists, nonprofit and community organizations and small businesses.

Macaroni Flats is nearly leased out with several businesses, including Latham’s company and Utah Rock Art, already open and most of the residential tenants already moved in.

Artspace has a long history in the Rio Grande Area.  The nonprofit has operated out of the neighborhood for at least 20 years including the Artspace Bridge Projects directly north of Macaroni Flats, which the organization opened in 2001.  But according to Norie, in recent years there has been an increase in quality of life issues in the neighborhood.

Both Artspace buildings are across the street from the Road Home Shelter.  The blocks increase in crime was enough to drive away a longtime tenant of the Bridge Projects building, Spy Hop Productions, a nonprofit dedicated to mentoring youth in the digital media arts.  In July of last year, Spy Hop temporarily relocated to a newly converted office building at 700 South and West Temple.  The nonprofit is developing a new space in the Central Ninth neighborhood and will again relocate there when the building is finished.

Despite concerns with the area, Artspace agreed to expand their presence in the neighborhood when RDA staffed reached out to the organization about developing the Macaroni building.  The project is the first component in the Station Center project area.  Station Center consists of five RDA-owned parcels bounded by 200 South to 400 South and 500 West and 600 West.  The RDA originally planned to start construction this year on infrastructure improvements for the area to prepare for new development, but the construction timeline will be delayed after city council acting as the board of directors for the RDA voted to reapportion funds for Station Center to go to creating more affordable housing in the city.

“We look forward to the development and are committed to seeing Station Center flourish,” said city council member and chairperson of the RDA, Lisa Adams.