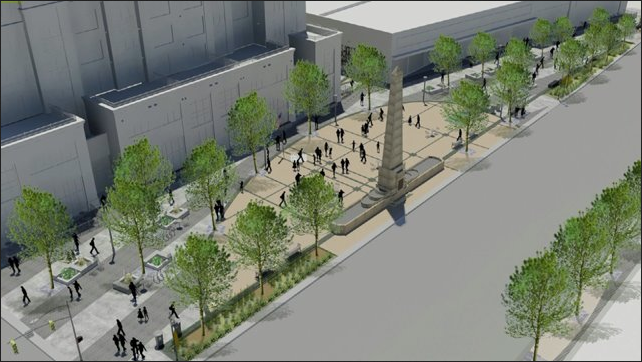 December has shown to be a good month for Sugar House.  Last December Sugar House celebrated the opening of its first modern streetcar line, the S-line.  This December, Salt Lake will again welcome a more urban Sugar House, with hundreds of new residents and a new urban plaza.

Construction is nearly complete for the Sugar House Crossing development and the adjacent Liberty Village apartments are expected to be completed by the end of the year.

Coinciding with the completion of these two large residential and mixed-use projects will be the opening of the new Sugar House Monument Plaza.  The monument, long considered the heart of the Sugar House business district, is being expanded and remodeled to make the site into an urban plaza at the intersection of 2100 South and 1100 East.

Construction on the plaza began two weeks ago with an expected completion in December.  Since the depression era monument was built, the monument has been separated from the block it fronts by a right-turn only through street and on street parking.  The monument and a bus stop shared the concrete island along 2100 South.

The new Monument Plaza will instead be a modern urban plaza that creates a gathering point for pedestrians along 2100 South and 1100 East.  As Sugar House moves toward becoming a more walkable, dense community, the plaza and the hundreds of new residents that will live within a block from it, will bring new street-level energy into the core of Sugar House.

According the Redevelopment Agency of Salt Lake, the $2.5 million renovation of the monument “will feature nearly an acre of public open space, reactivation of the historic monument’s fountain, installation of a new interactive water feature, outdoor dining, and public art.”

Facing the new plaza is the Sugar House Crossing development which when finished will included 200 residential units and 53,000 square feet of ground floor retail space.  Sugar House Crossing will be completed by the time the plaza opens.  The plaza will be a great amenity for the new residents and the many shoppers that will frequent the area, especially during the holiday season.

The new plaza will also be where the next phase of the S-line streetcar will end.  Earlier this year, the city applied for a $10.6 million federal grant to extend the S-line to the intersection of 1100 East and 2100 South.  The plaza will also include a pedestrian walkway that will connect it to the current Fairmont S-line station that sits a block south at the intersection of Sugarmont Dr. and McClelland Street.

The neighborhood has looked for new ways of creating more public spaces.  Last year the parking lot in front of the old Deseret Industries along Highland Dr. was turned into a temporary plaza.  The temporary plaza, called Sugarmont Plaza, includes a snow cone shack, outdoor seating and hosts the Sugar House Farmer’s Market that is held every Friday afternoon from July to October.