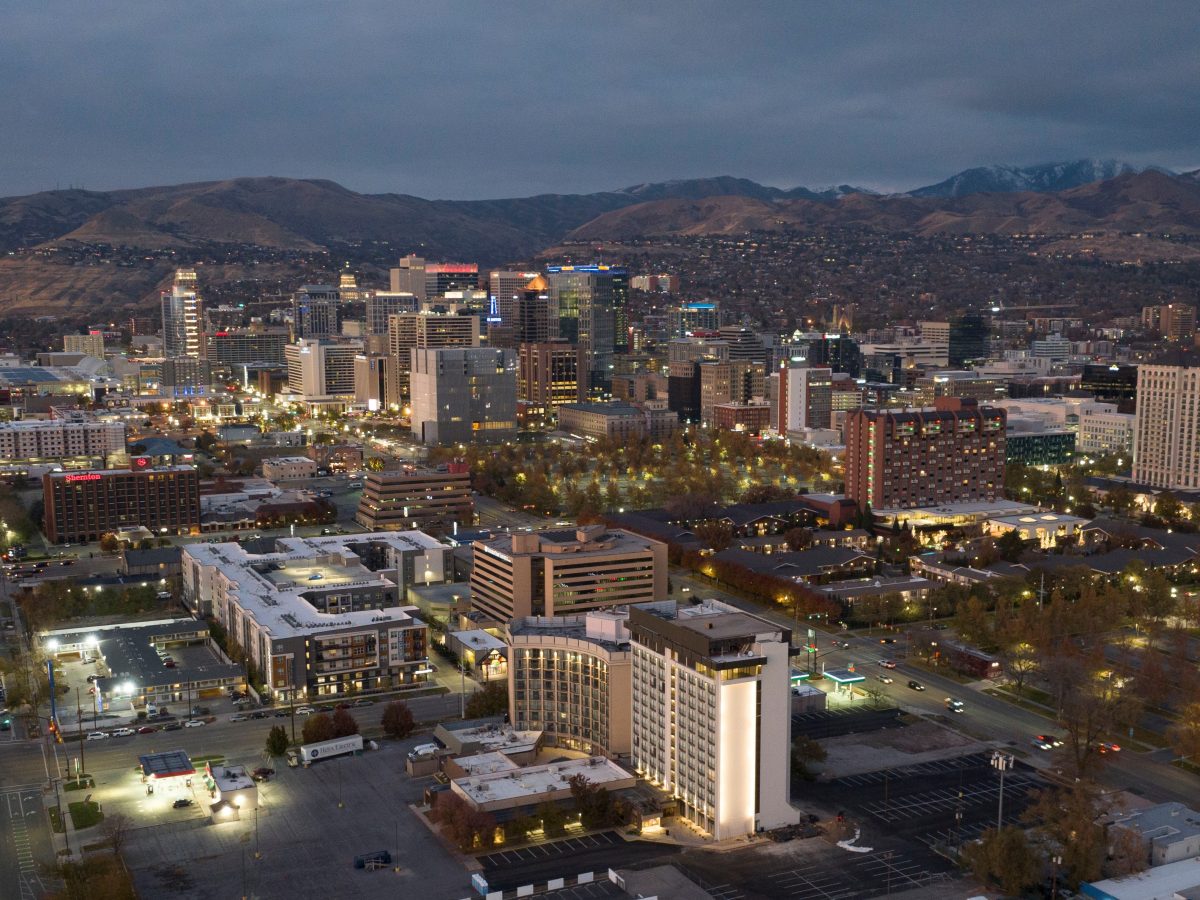 If there’s one thing that kept Building Salt Lake readers interested in 2022, it was the loss of buildings.

Stories about buildings to be demolished, those that already were and some that were lost before they were even built captured readers’ attention time and time again this year.

And in a city that’s changing as rapidly as Salt Lake City, demolition is a common storyline.

We covered important policy updates on parking minimums, zoning, accessory dwelling units, displacement and gentrification. As is often the case in growing urban areas like Salt Lake City, those stories often overlap with each other.

Consider this your Building Salt Lake wrapped, community edition. In 2022, a year when more people read BSL than ever, these were the top stories by raw readership. (Keep an eye out for the stories we’re watching heading into 2023, the biggest trends from 2022 and more end of year coverage to come.)

Boy Scouts’ building on Foothill to be demolished as LDS Church reshapes its 33 acres adjacent to the U.

Salt Lakers used to passing the unique two-story modernist home of the Boy Scouts of America at 525 Foothill Drive will soon be looking at a vacant lot.

The three-pronged building, built in 1970, was vacated by the Boy Scouts’ Great Salt Lake Council in early 2020. The owners of the parcel, the Church of Jesus Christ of Latter-day Saints, have applied to the city for a demolition permit.

The 2.15 acre parcel is valued at $2.5 million by the county assessor. It is part of 33-acre assemblage owned by the Church between Central Campus Drive, Foothill, and Mario Cappechi Drive which includes the large Salt Lake Institute complex, built in 2002, a ward house, and multiple parking lots. The parcels and buildings are worth over $76 million according to the county.

Sugar Alley all but destroyed in massive overnight fire. It sought to extend Sugar House retail and housing space.

It turned from a breaking news story to an obituary about one of Sugar House’s most promising new buildings.

A fire broke out overnight at the building called Sugar Alley in late October during one of the region’s first cold snaps of the winter season.

The building was largely completed. Ground floor retail tenants were lining up. And the core of the urban center of Sugar House was about to be expanded south in a big way, with space for hundreds of more residents. It all went up in smoke on Oct. 26.

All eyes are on Sugar House. The neighborhood is urbanizing at a rapid clip, on its way to becoming the city’s second downtown. To see that pace halted overnight was a spectacle that captured the attention of the region.

The developers told us they plan to rebuild the project as planned. We’ll see how long that takes and what the market for apartments looks like at that point.

Take a walk through the apartment offering Utah’s highest rent

The first project in the multi-phase Downtown development known as the West Quarter is starting to lease out to tenants, and the developer allowed us to talk through the high-end apartment project known as The Charles.

Industry insiders and members of the public were interested in the details of the new development that was fetching top dollar for the highest-end units.

This will be an ongoing storyline moving forward, as new high-rise apartment projects come online, the market for top rent will become more competitive. It’s a niche that has never been met in the city before. As things settle heading into year three of the COVID housing economy, it’s too soon to say whether the city will repeatedly see five-figure rent for ultra-luxury units.

Intermountain to begin demolishing the Sears Building this week

Neglected? Sure. But there’s no doubt the Sears Building was an icon.

The hulking relic of the past sat for decades amid a sea of unused pavement in the section of Salt Lake City that’s come to be known as Midtown. That is, until the wrecking crews finished tearing it down this fall.

We broke news that Intermountain was taking over development of the Sears Block last year, the start of a transformation of a nearly 10-acre parcel that will almost certainly see the development of a hospital near the center of the capital city.

The company says it plans to build an “urban hospital.” That would be in contrast to several other Intermountain facilities along the Wasatch Front, including in Murray and Provo. We should have details by mid-year on what the nonprofit has in store for the site.

Building in historic district torn down without a permit

It started as a mystery. A Building Salt Lake reader reached out to ask what project was causing round-the-clock construction noise near her apartment. It’s a request we get fairly frequently, and one we’re happy to share information on. If we can find it.

In this case, our search led to a dead end. So we dug a bit further. Nothing.

It turned out the cold case was caused by a developer who began work without following the proper procedure for tearing down buildings in historic districts. In this case, the demolition impacted non-conforming structures, or those the city has studied and deemed weren’t worth protecting.

UDOT unveils details on new $1.6B widening of I-15 through SLC

It’s not sure how many homes and businesses will be demolished, and the exact cost is still uncertain (though early estimates put it around $1.6 billion), but the Utah Department of Transportation is planning to widen Interstate 15 from Salt Lake City to Farmington.

With so many people concerned about displacement caused by demolition of homes, along with air quality and the existing east-west divide in our city, it only makes sense that people are interested in this story.

A collection of groups has begun to organize in opposition to the project. We’ll have updates in the new year.

In a case that the neighborhood might revisit if given the chance, opposition to more dense housing near the core of Sugar House led a developer to back away from attempting to make a project work.

Instead of selling the property to a developer who would build housing on a key parcel, the owner chose to take the sure bet and lease the property to a Midwest gas station chain called Kum & Go, we first reported in January. (That story was our eighth-most read for the year.)

The tragedy, according to one of the developers who was interested in building housing on the site, is that he knew this type of use was on the table if it wasn’t housing.

Even in hindsight, neighbors don’t want to believe what’s happened, choosing instead to claim the ordeal never happened. The Planning Commission has yet to approve the conditional use application that would allow the gas station to be built. We’ll provide updates in the new year.

Building Salt Lake partner Luke Garrott wrote a series on changes that are occurring along the North Temple corridor last year. Years ago the City Council rezoned North Temple and the streets two blocks north and south of it to encourage population density along the fixed transit line.

The ensuing changes have led to angst among some in the community who worry about loss of character and the rising cost of rent and housing in general.

But readers were interested in news that the Gateway Inn, a notorious motel along the entry or exit to the corridor directly on North Temple, had been put up for sale for a whopping $8.3 million.

As Salt Lake City’s Triple-A baseball considers moving out of the city, the future of the Ballpark neighborhood becomes even more uncertain

This storyline will carry over into the new year, and it has possibly huge implications for the Ballpark neighborhood.

Will the Miller family keep the Salt Lake Bees in the capital city or relocate them to the suburbs?

Talks at city hall over the Bees’ expiring lease at the city-owned Smith’s Ballpark have been ongoing for the better part of a year, sources confirmed. City Hall, meanwhile, rushed to create a new master plan for the neighborhood.

The secretive negotiation between the city and one of Utah’s wealthiest families has some developers with significant land holdings in the area immediately near the ballpark waiting to see how things shake out before moving forward with projects.

Expect more on this story in the new year.

Last year, it was that the fast food burger drive-thru In-N-Out would not be coming to 2100 South in Ballpark. This year, it’s closer to Downtown.

Readers were interested in a high-rise, mixed-use project that was set to replace a Crown Burgers location in Central City. To close watchers of urban development, this isn’t exactly breaking news.

But the developers asked the city to pull the matter from the Planning Commission agenda later in October. The design review file has been closed and the planned development application withdrawn.

Perhaps there will be an update in the new year, but it would be something new.