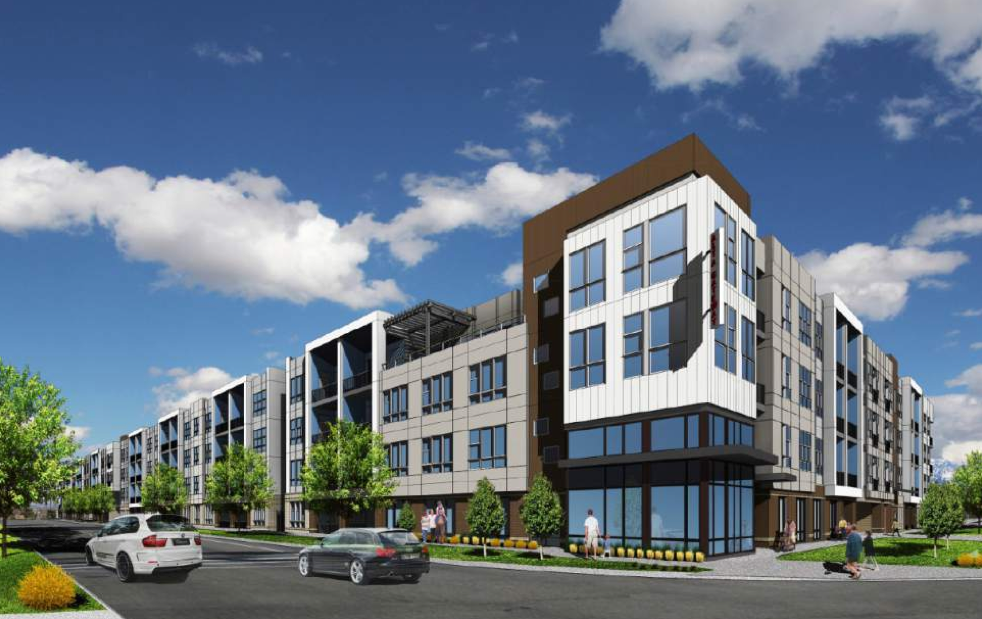 After a few months of quiet at the southwest corner of 100 South and 500 West intersection, Wood Partners, a national real estate company, has officially broken ground on the Alta Gateway.  The project is the company’s first in Salt Lake City and construction is now under way on the 277-unit apartment project a block west of The Gateway.

The project will consist of a four-story building that wraps around a 459-stall, parking structure and an amenity courtyard on a 3.2-acre parcel.  Like most multi-family developments under construction in the City, Alta Gateway units will be market rate.

The first phase of the project replaces a vacant lot and two warehouses.  The developers plan to eventually redevelop more of the block in future phases.

The project will be within a block of three TRAX stations.  The development will be directly adjacent to the Old Greek Town TRAX station on 200 South and a block from the Salt Lake City Intermodal Hub and the Planetarium TRAX station.  A landscaped, mid-block pedestrian walkway will be built at the western edge of the first phase to help break up the block when future phases are built and provide a pedestrian connection to the TRAX station.

According to the developers, “Alta Gateway will offer top-of-the-market amenities in a downtown housing market that is dated with scarce availability for urban professionals” and will “be significantly more than those offered by other luxury apartment communities in the area.”

The property will feature a spacious rooftop deck with a pool, fireplace and outdoor kitchen, a community clubroom for socializing and entertaining, a private fitness center, a cyber cafe, wine cellar, a dog-friendly outdoor park and an onsite workshop for bikes and skis.

“We believe that Alta Gateway will be hugely attractive to young professionals and couples who want to live an active urban lifestyle,” said Clay Iman, director for Alta Gateway in a press release. “The housing market in Salt Lake City has traditionally been suburban, but we believe job growth and infill development have fueled a strong demand for housing downtown, and capital is available to fund it.”

The Depot neighborhood has become the epicenter of the drug trade in the Salt Lake Region, with many dealers taking advantage of the large crowds that gather daily seeking homeless services.  Salt Lake City Police Chief Mike Brown announced yesterday several new policing strategies to reduce crime in the vicinity.

Even with current conditions, the addition of 277 residential units to the 100 South block of 500 West reflects a growing interest in the Gateway/Rio Grande Districts.   Alta Gateway is one of three multi-family projects under construction in the neighborhood.  At the northwest corner of the 200 S.  300 West intersection, construction is under way on the Paragon Station Lofts,  a 38 residential unit development by Clearwater Homes.  Just over a block to the south, framing will soon begin on the 360 Apartments, a six-floor 151-unit project directly west of Pioneer Park.

The Redevelopment Agency of Salt Lake is partnering with private developers to create Station Center, a proposed mixed-use neighborhood on the two blocks between the Rio Grande Depot and the Intermodal Hub.

Alta Gateway is expected to be available for lease in fall 2016.