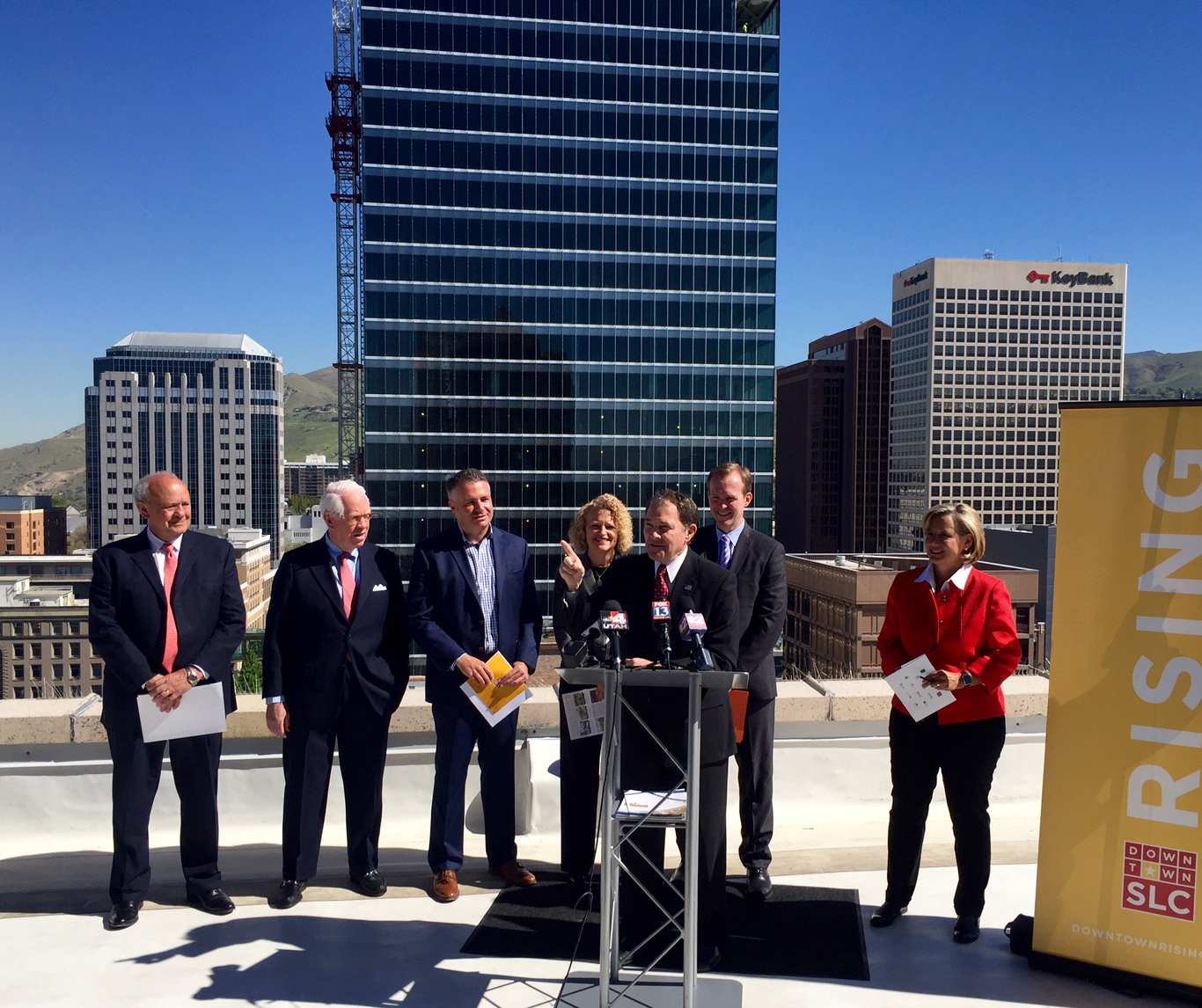 Local and state officials marked the 10 year anniversary of the Downtown Rising campaign, while announcing plans for an updated action plan during a Tuesday morning media event on the roof of the Walker Center building at the intersection of 200 South and Main Street. The event, hosted by the Downtown Alliance and Salt Lake Chamber, coincides with a public hearing for the Downtown Plan, planned for Tuesday’s Salt Lake City Council meeting.

“You can not have the economic success this state has enjoyed without a vibrant capital city like Salt Lake,” said Utah Governor Gary Herbert.

A lot has changed in downtown Salt Lake since 2006, when Lane Beattie and Natalie Gochnour of the Salt Lake Chamber launched Downtown Rising.  The project, intended to coincide with the building of the City Creek Center, detailed the vision of an expanded downtown Salt Lake to be realized over the next decade.  Since the launch of Downtown Rising, the city has welcomed thousands of new residents, two residential towers and two office towers, one completed and the other slated to open later this year.

“Downtown continues to rise,” said Beattie, before acknowledging that there is still more work to do.

According to Jason Mathis, the executive director of the Downtown Alliance, the new action plan will focus on the three areas: building a downtown technology center, increase in downtown housing and supporting the arts, culture and sporting events downtown.

Over the next few months, the Downtown Alliance will host several open houses, focus groups and an online survey to gather public feedback that will be used to develop a new 10-year Downtown Rising Action Plan.  The action plan is expected to be released at the end of the year and according to Jesse Dean, the director of urban development for the Downtown Alliance, it is intended to help implement the city’s proposed Downtown Plan.

The Downtown Plan spent several years in development with multiple drafts.  According to Molly Robinson, the urban designer for Salt Lake City, between 2012 and 2014, city planners focused on public outreach through organized information sessions, focus groups and “living room socials,” where residents could invite planning staff into their homes to talk to neighbors about the strengths and weaknesses of downtown.  Planners also hosted brown bag lunches to talk with leaders of local businesses and nonprofit organizations.

If adopted by City Council, the Downtown Plan would replace the current Downtown Master Plan, Gateway District land Use and Development Master Plan and the Gateway Specific Master Plan.

The existing plan for downtown was adopted in 1995 and, according to Robinson, the majority of that plan’s goals have been met.  The updated plan will encompass a larger area, from North Temple to 1000 South and Interstate 15 to 200 East, and will focus more on the neighborhoods and individual districts within the project area.

Both the Downtown Plan and the Downtown Rising Action Plan will focus on adding density downtown through increased housing options and a renewed focus on enhancing vibrancy.  The city estimates that 20,000 people will live downtown by 2040. Current estimates put the population at just over 5,000.  According to the 2010 Census, there is an average of three dwelling units per acre in the plan area.  In comparison, downtowns in Denver and Portland average eight and 14 units per acre respectively.

The Downtown Plan notes that the majority of housing units in the downtown project area are in multi-family buildings with 10 or more units.  The plan recommends expanding housing options to include to mid-density housing like townhomes and duplexes that attract families while still providing the higher density housing attractive to singles and empty-nesters.

Open space is a key component of the Downtown Plan.  The updated version of the community plan includes new recommendations for the Green Loop, a linear park that builds off the green loop proposed in the original Downtown Rising plan.  The linear park would run along 200 East and connect to City Creek Canyon and Memory Grove.  The park would then loop through the Central Business District eventually connecting to the Gateway Commons Park on 500 West.

Rail transit is also key to the revised Downtown Plan.  City planners recommend creating a downtown circulator by extending TRAX west on Main Street along 400 South to the Intermodal Hub at 600 West. A second route would potentially extend TRAX down 400 West off 400 South to reconnect with the current TRAX line at 200 West and 700 South.  The new plan also proposes two streetcars connecting the Granary and Central City/East Central neighborhoods to downtown.