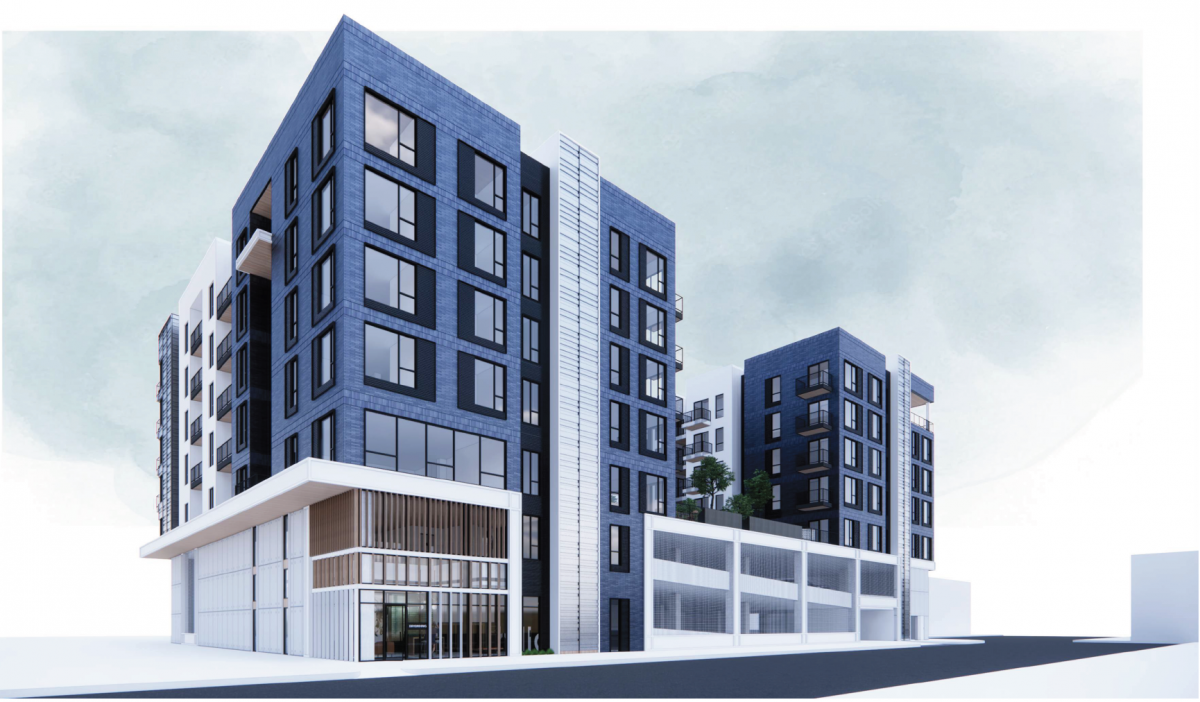 A new proposal for the area near Smith’s ballpark would add 115 new residential dwellings in a seven-story building while providing very little for the broader public despite calls for it to do so.

The new apartments at 1365 S. Jefferson St. seek to capitalize on the aura around the Ballpark Station Area Plan by adding density near transit in what the city officially considers the heart of the neighborhood.

That’s about all the project would bring to an area that is supposed to become a vibrant and mixed-use neighborhood that could stand on its own whether or not the minor league baseball team is on the nearby field.

“We believe that our proposed Project for 1365 Jefferson fully embraces both the stated goals and spirit of the proposed Ballpark Station Area Plan,” said Barry Rudofsky, president of Bronstein Properties, the developer behind the project.

Rudofsky noted pedestrian-level street lighting, wide sidewalks, “openings in the building envelope to allow light and views to the public right of way at all levels,” upgraded streetscapes and some greenspace.

Even with sidewalk widths adequate enough for an urban area, this project likely won’t offer reason to continue south of Lucky 13 for a stroll and will instead cement the area as a double dead-end in a dense part of the neighborhood.

Albemarle would continue being treated as an alleyway with no active uses despite its status as a city street that wraps from West Temple to Jefferson and 1300 South. The 1365 Jefferson apartments propose a cement wall with a hole covered by mesh screening facing Albemarle.

Rather than starting to improve Albemarle as an existing mid-block connection to West Temple, the developers are reserving some space on the proposed building’s north end for a sidewalk. (There is none on the south end.) The north end will dead end into an alley and require coordination by a future, unplanned project to connect the walkway to West Temple.

The facade facing Jefferson includes a small lobby on the north end and 2.5 levels of concrete ramps for the parking garage, which is also accessed from Jefferson.

Within steps of the baseball stadium and transit hub, this is an area that the Ballpark Station Area Plan designates the “heart of the neighborhood.” With that designation is supposed to come a sort of offering to the public that is absent in the proposal.

“This is the central hub of the neighborhood which will continue to densify as mixed-use development occurs,” the new Ballpark plan says.

But that density “must be balanced with improvements to the public realm including an expanded sidewalk, pedestrian-focused amenities, plazas, street lighting and street trees,” it continues. “A high level of visual interest and design quality is needed to balance the increased density in the area and require street activating uses on the ground floor.”

The project calls for a plaza, but one that is so exclusively private that it’s set two stories above the street.

Several outdoor areas around the building’s ground level, including immediately up to Albemarle Avenue, are also private, made clear by the 6-foot metal fence proposed to surround each area.

It appears the team may not have followed the progress of the station area plan. Rudofsky said the plan hadn’t yet been adopted. (The City Council adopted it on Oct. 18.)

“During the application process, we remain receptive to any input from the City and the Community which could help improve our Project,” Rudofsky said.

The Planning Commission is generally bullish on adding more housing to the capital city, market rate or otherwise. At the same time, there are several design hawks on the commission who might offer some pointed critiques for creating a more engaging ground floor when the project reaches an agenda.

It appears the developers aren’t embracing the vision and possibility for the area. They’ve proposed a building that reacts to the challenges that exist and not the possibility of a better future.

That future is spelled out in the Ballpark Station Area Plan. Will it be followed?