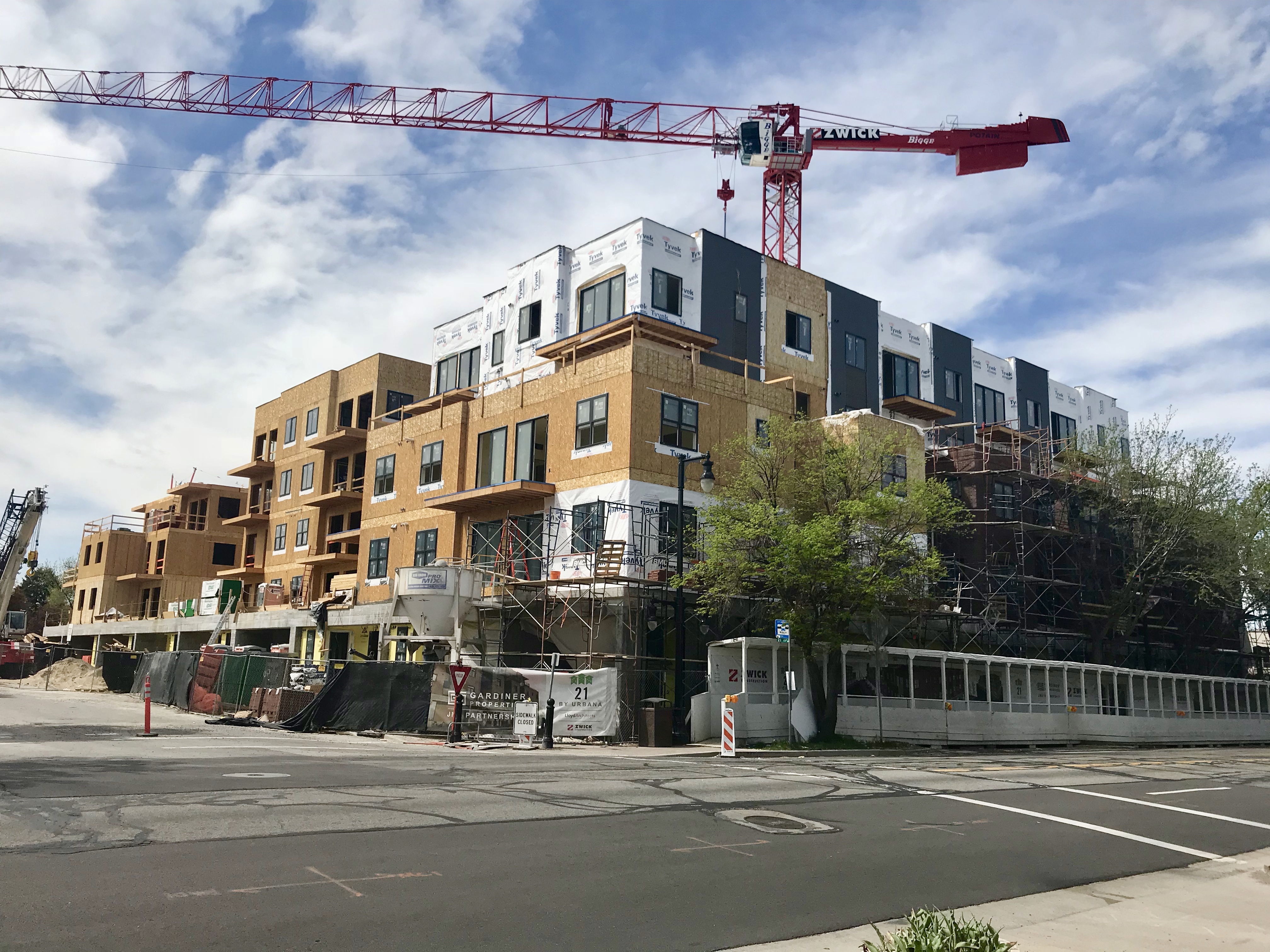 Construction continues unabated in the Sugar House Business District with four projects actively underway, bringing new jobs, residents, hotel guests and a small amount of additional retail to the area.  Although 21 by Urbana does replace some local businesses, the rest of these developments, Park Avenue, the Sugarmont Apartments and the Springhill Suites, are replacing shuttered businesses and large amounts of surface parking and replacing them with higher density and additional pedestrian connections.

The five-story, 126-unit apartment building by Gardiner Properties is almost fully framed at the southwest corner of the 1000 East and 2100 South intersection.  Gardiner Properties also has the Pierpont Apartments under construction in Downtown Salt Lake City, half a block north of Pioneer Park.  The project replaces a Subway and several small businesses.

Concrete is beginning to peak above the ground at the construction site of Park Avenue, a large mixed-use development underway at the near 1300 East and Interstate 80.  The project is by Westport Capital Partners LLC and consists of two phases, the first of which includes two buildings, 80Park and 60Park.  The first is a five-story, 170,00 square foot office building that will house the University of Utah Health Sugar House Health Center.   80Park will share a parking structure with 60Park, a six-story, 150,000 square foot office building that will sit just south of 80Park.  The second phase consists of 40Park, a proposed seven-story, 208-unit residential mixed-use building.  The project will add pedestrian enhancements to an area that was previously reserved for parked cars. The parking structure at the center of the development will front a reconstructed Stringham Avenue and will include a small street-level art gallery.  The development replaces a former Shopko department store and a large surface parking lot.  The project will connect Stringham Avenue between Highland Drive and 1300 East, add Ashton Avenue to the south and include additional north/south pedestrian connections.

Construction continues on the Sugar House Business District’s new largest residential development. The development, by Boulder Ventures, will be eight-stories tall and contain 352 apartment units.  It is located just north of Fairmont Park and the current terminus of the S-Line Streetcar.  The concrete podium looks complete with framing underway moving from south to North.  The Sugarmont Apartments replace the former Granite Furniture warehouse and adjacent surface parking.  The project includes a pedestrian walkway through the project that will link Sugarmont Drive with 2100 south, connecting with the walkway between the Vue at Sugar House Crossing and the Granite Furniture building.

Construction is starting to ramp up on the six-story, 125-room Springhill Suites.  The hotel will be the second hotel in the Sugar House Business District and the first new hotel in 20 years.  The hotel replaces a surface parking lot directly east of the shuttered Toys ‘R Us building and is the third project by Woodbury Corporation at the 1200 East block of Wilmington Avenue.  Woodbury recently finished two adjacent mixed-use projects on Wilmington Avenue, the Legacy Village the Wilmington Flats.  The project replaces a surface parking lot and adds pedestrian connections on each side of the building, connecting Wilmington Avenue to points south.