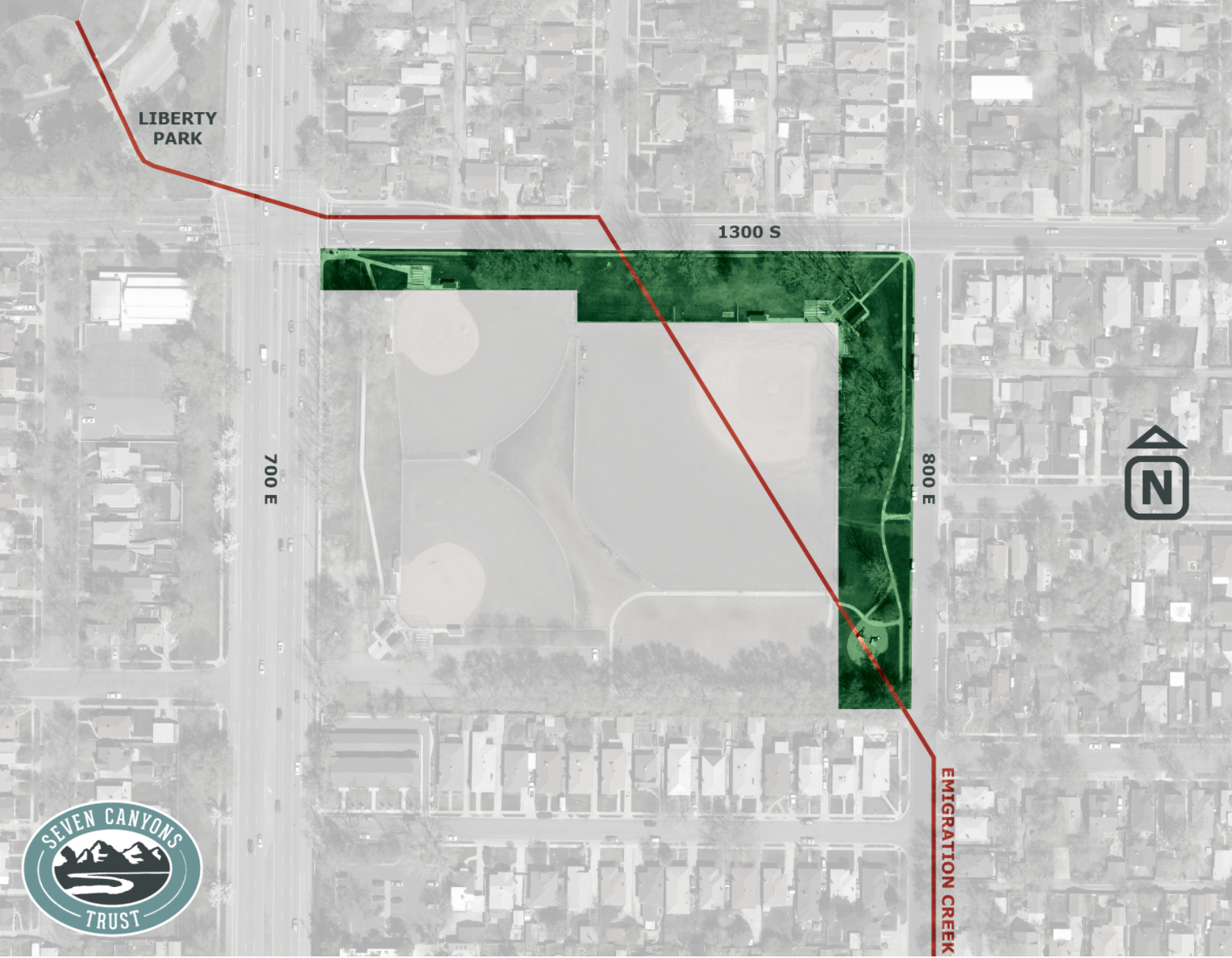 On any given warm day, the city’s second largest park, Liberty Park is filled with life and activity.  But while Liberty Park is often buzzing with energy, unless a baseball game is playing, adjacent Herman Franks Park is devoid of activity.

“The park is really use-centric, the baseball fields take up the majority of the space,” said Tonetti. “Certain times of the year or times of the day the park is often empty.”

With financial support from Bockholt Landscape Architecture and the Franks Family Foundation, Seven Canyons Trust will hold a community-based design charrette to design and plan how to best uncover over 1,000 feet of Emigration Creek along the north and east sides of the Herman Franks Park in the East Liberty neighborhood of Salt Lake City.

The park is named after the baseball player and Utah-native, Herman Franks, and includes three baseball diamonds and a small dog park.

According to the Seven Canyons Trust, “daylighting Emigration Creek has the potential to improve water quality, mitigate flooding, improve access to nature, stimulate economic vitality, formulate a living laboratory for nearby schools, create walking and biking trail connections and design more livable cities to enhance the quality of life.”

Large portions of Emigration Creek are already daylighted.  The creek runs uncovered from the mouth of Emigration Canyon to Westminster College’s campus, where it slips underground until spilling into the pond at Liberty Park.

Seven Canyons Trust will host the community design charrette November 18, 2016, from 5:30 p.m. to 8 p.m. in Tracy Aviary’s Education Room at 589 E. 1300 South.   The organization will gather participant feedback on ways to uncover Emigration Creek at the north and east perimeters of Herman Franks Park and activate the space between the baseball diamonds and the surrounding roads.

According to Tonetti, the restored creek channel will create a beautiful backdrop for the current uses at the park, without disrupting them in any way.  Friday’s community design charrette will be one of two charrette’s planned this year.  After Friday’s workshop, the design team will use community feedback to formulate two design concepts.  The organization will then hold another community design charrette, in December, to gather input on the two design before producing the final preferred design that organization will use to present to the city and community officials.