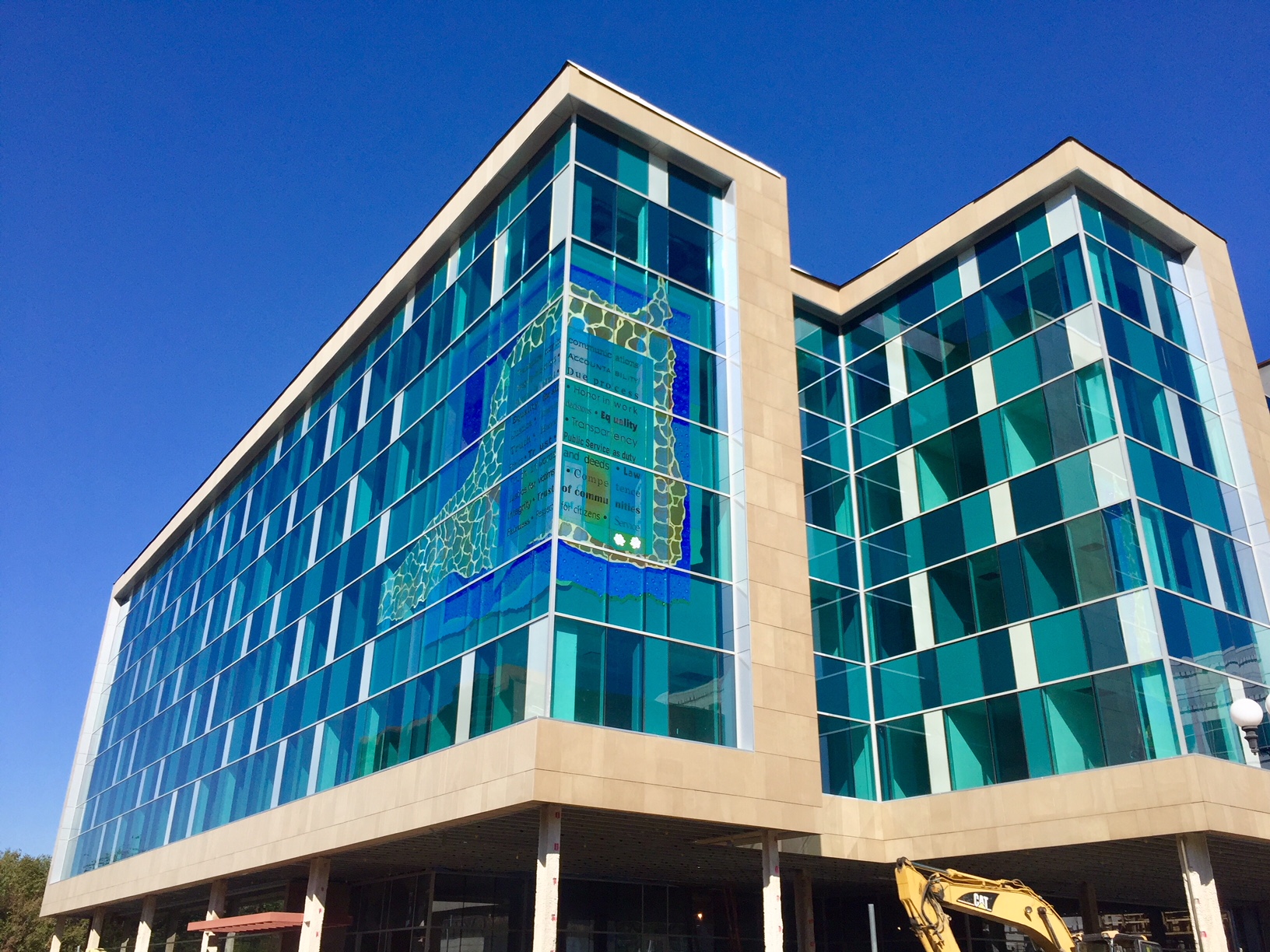 It will be several months before the county attorneys move into Salt Lake County’s Downtown District Attorney Office Building, but a central component of the project made its debut.

On Wednesday, Salt Lake County officials joined artist Gordon Heuther in the unveiling of a large artistic display on the southeast corner of the building’s glass facade on 500 South near Main Street.

“This is a beautiful intersection of art, architecture and criminal justice,” said Heuther.

Heuther beat out 100 other artists in the county’s selection process.  He says the color choices are meant to pay homage to the Great Salt Lake to give the display a sense of place.  The art installation is just over two stories tall.  Heuther said that the finding the right glass was initially a challenge because the display must also as floor plates and need to be highly reflective to make the display visible from the street.

“This (display) makes it a unique addition to the building and the street,” said Salt Lake County Mayor Ben McAdams.

The DA Building isn’t expected to open to county attorneys until next spring.  The five-story building is being built to LEED Gold standards and will provide over 100,000 square feet of office space to district attorneys that prosecuting cases in the adjacent Scott M. Matheson Courthouse.

For two decades county’s attorney’s have sought to have permanent office space.  According to McAdams, it wasn’t until Salt Lake County District Attorney Sim Gill showed the mayor how owning would be cheaper than renting.  McAdams estimates that the owning DA Building will save taxpayers around $13 million over the life of the 20-year bond the county used to finance construction.

“The biggest winner will be the taxpayer,” said McAdams.  “It will be an iconic addition to the city’s landscape.”

The county previously planned to build the office building as part of a public/private partnership after the county purchased the surface parking lot at the northeast corner of the intersection of Main Street and 500 South from The Church of Jesus Christ of Latter-day Saints.

After failing to find the right private partner, the county opted to move ahead with the DA building but place it in the middle of the block to allow for future development of the more prominent block corner.  The county plans to eventually sell the corner parcel to a private developer.  The property is in the D-1 zone (Central Business District), which allows developers of a corner parcel to build up to 375 feet (about 30-stories).  Projects in the D-1 zone can surpass the 375-foot height limit if approved through the Conditional Building and Site Design Review (CBSDR) process.

In the interim, McAdams sees the DA Building as a catalyst for further development of the south end of downtown.  And that development appears to be on its way.  A Texas-based developer plans to build two 11-story office buildings a block to the south of DA Building near Main Street and 600 South.  Additionally, the nearby 600 Lofts on 600 South and State Street opened earlier this year adding nearly 280 residential units to the neighborhood.