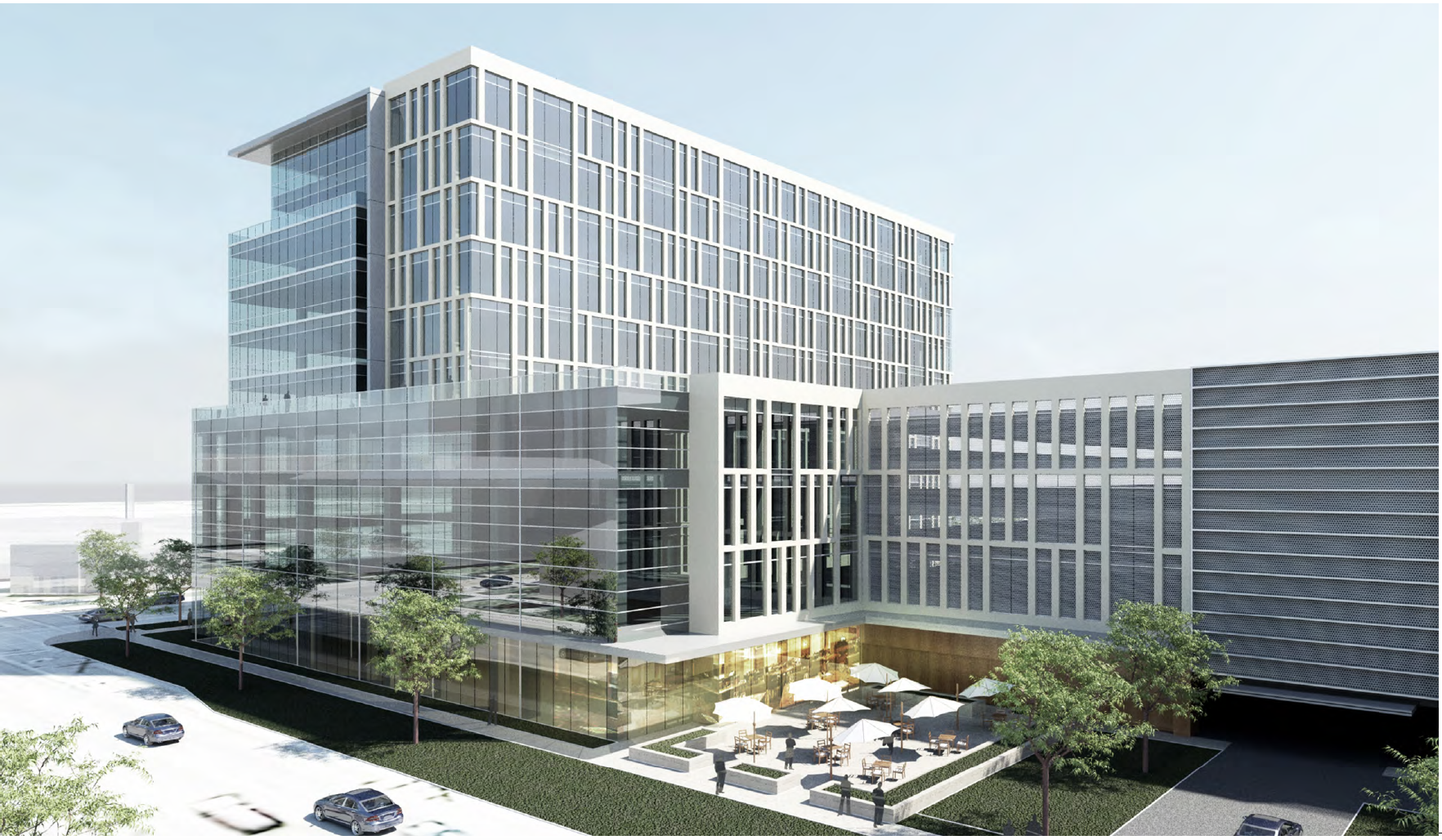 Patrinely Group is going through the Conditional Building and Site Design Review process which will require them to go before Salt Lake City Planning Commission for approval before construction can begin.

The project will be over 6.5 acres in size and replace the large surface parking lot directly south of the Little America Hotel.  The two buildings will add over 600,000 square feet of Class A office and retail space and between 950 to 1,000 structured parking spaces.  The buildings would include ground-floor retail space below nine floors of commercial office space, a fitness center, several open plazas and electric vehicle charging stations.

The developers are requesting height variances for the southern portion of both buildings.  The development is zoned D-1 (Central Business District) which allows for corner building heights up to 375 feet and mid-block building heights up to 100 feet.  Patrinely Group is proposing two 120-foot towers, but because the proposed length of the two buildings will extend to the middle of the block, the developers will need the height variance to build past 100 feet.

According to planning documents, the developers argue that the uniform height across the length of the building is to accommodate the large floorplates preferred by Technology companies, the type of tenants that Patrinely Group intends to attract to the project.

The developers also argue that the more uniform building height will allow them to shorten the length of the building and include outdoor courtyards directly south of the both proposed buildings on West Temple and Main Street as well as a courtyard on 600 South that will include outdoor dining space for ground floor eateries.

In planning documents, planning staff noted that the city zoning code requires projects in the D-1 zone to provide midblock walkways and not exceed 300 feet in length along the street front.  The current plans for the Patrinely project show the two office buildings and parking structures giving the appearance of one building.  Current plans show landscaped courtyards separating the parking structures from the bulk of the office buildings.  Planning staff suggested that the developer could comply with the zoning requirement by providing a pedestrian connection between both buildings and the parking structure connecting 600 South to the interior courtyards.

The office development is one of the several new projects to the south end of downtown.  Last year, the School Improvement Network relocated its headquarters from the suburbs to an office building at the southwest corner of the same block.  The structure was formerly a car dealership but was converted to a three-story commercial office building.

A block to the north of the site for proposed office towers on 500 South near Main Street, construction is underway on the five-story District Attorney Building that will house the offices for district attorneys working at the adjacentScott M. Matheson Courthouse.  The DA office building topped out late last year.

A block to the east of the proposed office development on 600 South is the 600 Lofts (formerly referred to as 616 Lofts), a six-story, 274-unit affordable housing project.  The 600 Lofts project is over halfway framed out.

*This post has been updated to reflect new parking totals.