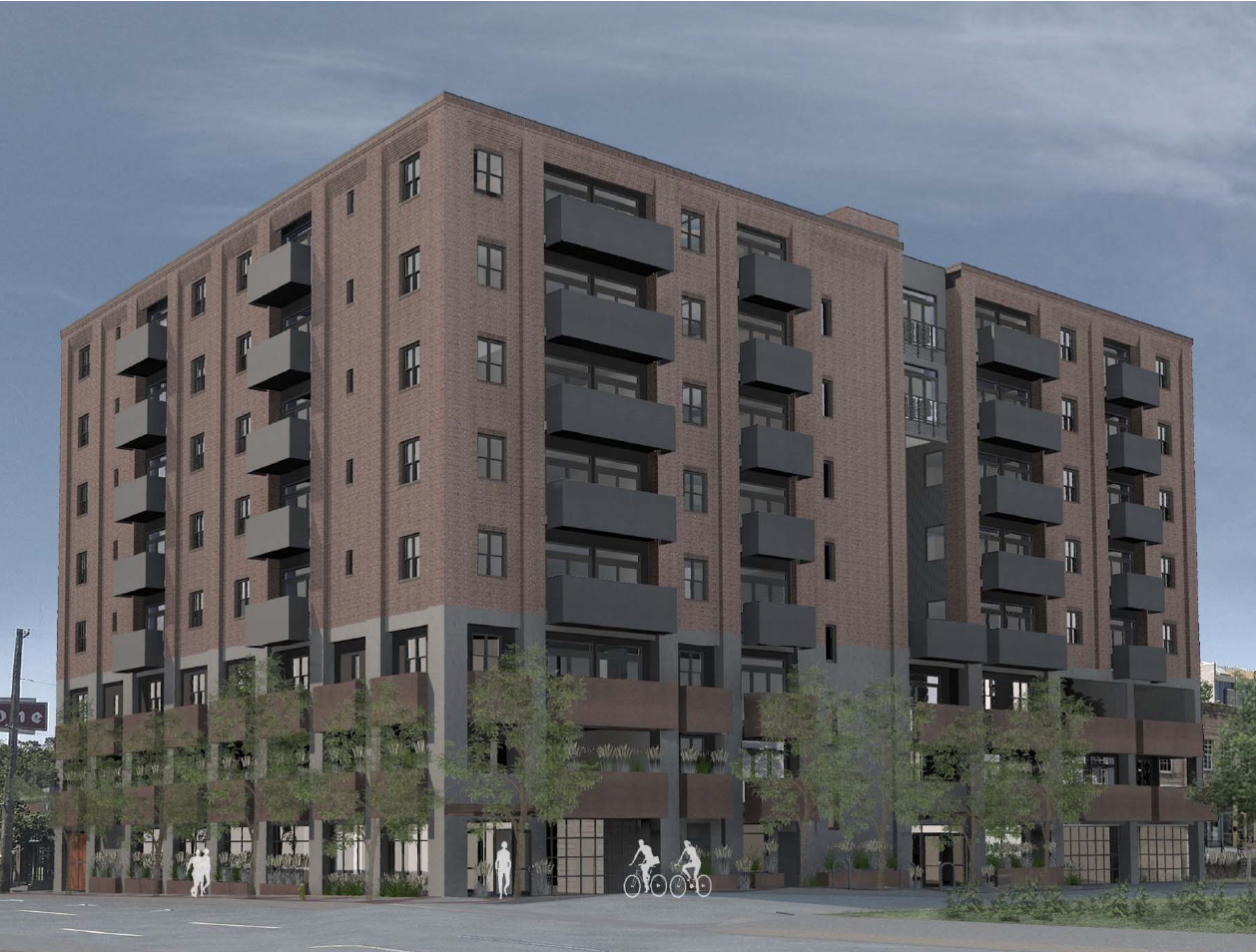 The Planning Commission approved a Conditional Building and Site Design Review which allowed the developers, Gardiner Properties, to build up to eight floors.  The project area is zoned D-3 (Downtown Warehouse/Residential District) which allows for building heights up to 75 feet.   With CBSDR approval, developers can build up to 85 feet. The project will include 87 residential units and 124 parking stalls, 28 of which will be reserved for the commercial property to the south (the historic Tire Town Phase I).  Parking will be accessed via Pierpont Avenue.  The units will be a mix of studio and one and two-bedroom apartments.

The project will consist of a four-story concrete podium with three of those floors above ground and four floors of residential and will a primarily brick veneer exterior.  While the building will single use, the developers have placed several residential amenities on the ground floor to try to activate the space.  Ground floor amenities include a main lobby, cyber cafe and fitness center.

Residential units will front Pierpont Avenue on the podiums top two floors to separate parking from the street view.  The fourth floor will include a 1,713 square-foot landscaped, outdoor plaza fronting Pierpont that will include a spa, sitting areas and a barbecue area.

The project includes open space on the at the center of the building along Pierpont that overlooks the street and has unobstructed sky views up to floors seven and eight that will have apartment units overlooking the space.

The Pierpont Apartments is one of three projects under construction in the vicinity.  Less than a block to the east on the 200 West block of 200 South construction is underway on an eight-story AC Marriott Hotel.  The hotel has topped out. In addition to the hotel is the Milagro Apartments, a seven-story mixed-use apartment building directly west of the hotel on 200 South.  The Milagro is built up to the podium level.  Both buildings are by PEG development, the team behind to recently completed hotels on the 300 West block of 100 South.  When completed, both projects will add a combined 270 residential units to the area.

The area surrounding the intersection of 200 South and 300 West will be busy with construction for the next few years.  In addition to the Pierpont Apartments, Milagro Apartments and the AC Marriott, developers The Richie Group, plan to build a large mixed used development on the Royal Wood Plaza block.  The first phase of that project will include an 11-story mixed-use residential building and an 11-story hotel.