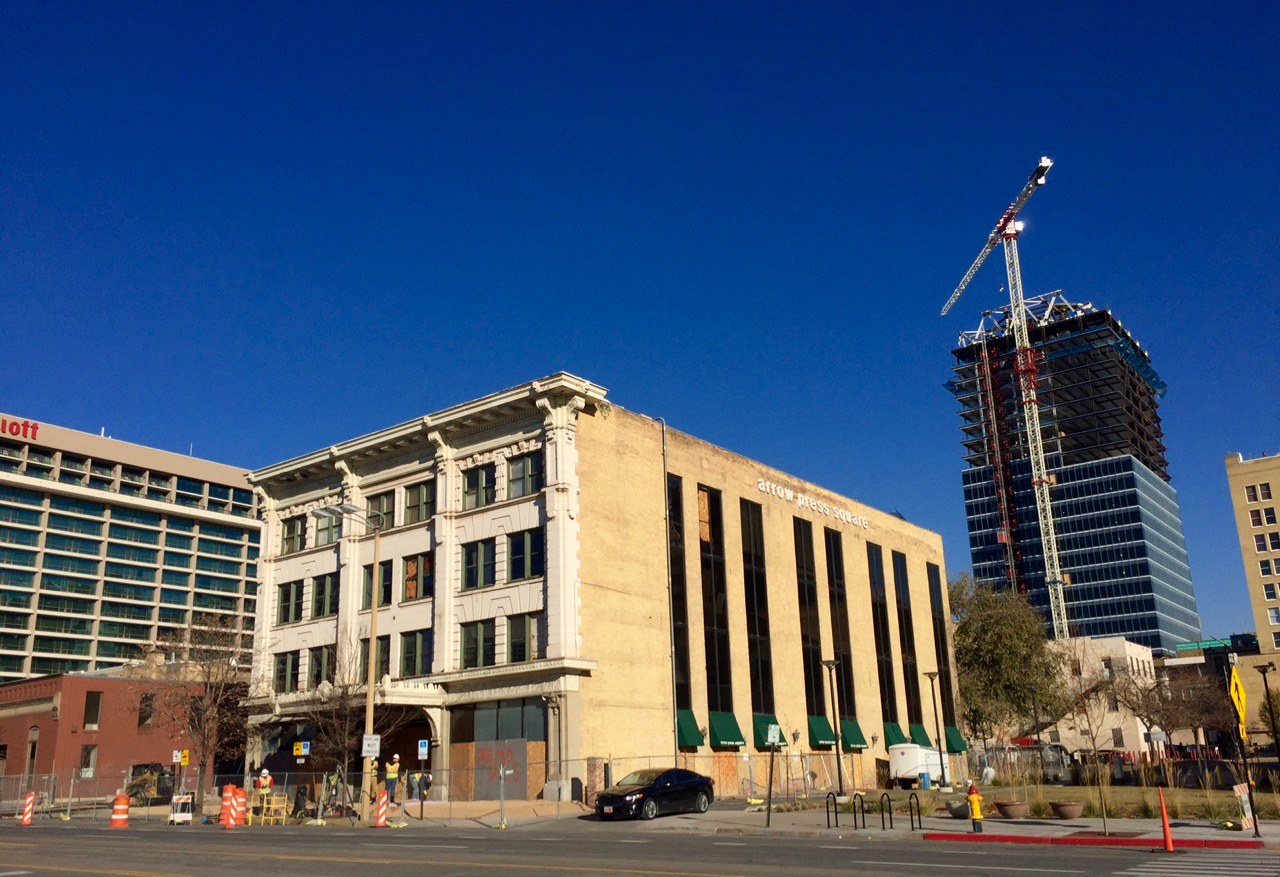 A resilient downtown building is coming down.    The site of the old Dead Goat Saloon and Club DV8 has survived fires and general urban decay and up until this week, demolition.

Demolition work is underway on the historic Arrow Press Square building and a smaller adjacent building.  As of Tuesday afternoon, demo crews were preparing the buildings for full demolition.  The buildings were on the 100 South block of West Temple, directly across the street from the Salt Palace Convention Center.

The building’s owners, real estate firm InterNet Properties, Inc., have spent years trying to demolish the building arguing that it is not salvageable and is a safety hazard.  The vacant Arrow Press Square building attracts vagrants, two of which were arrested in 2011 for a fire on the building’s third floor.  The former DV8 club just north of the Arrow Press Building was demolished after a fire in 2008.

The Arrow Press Square building was built in 1908 and was the first home of local alternative radio station, X-96.  In its 100 plus years, the building has housed a semi-nude strip club, offices, mexican and chinese restaurants and the Blue Boutique.

According to City documents, InterNet Properties Inc have not submitted building permits for a new development.  Under City code, the developers have 18-months to submit building permits or they will need to formally landscape the lot.

InterNet Properties appears to be actively pursuing development of the Arrow Press site.  The Downtown Alliance released renderings of a proposed project at the site in its “2015 State of Downtown” report.  The rendering revealed a mixed-use glass building similar in height to the office tower at 222 Main that was rumored to include residential units and a possible hotel.

The site’s location qualifies it as a candidate to house a new convention center hotel. Salt Lake County, which owns and operates the Salt Palace Convention Center is currently seeking Requests for Proposals (RFP) from developers to build a large convention center hotel within 1000 feet of the convention center.  The County walked away from negotiations with Omni Hotels & Resorts, the loan bidder from the original RFP issued in 2014, after talks stalled over the summer.

In January the X-96 team toured the Arrow Press Square building and talked to building’s owners about the plans for the site.  A video of that tour can be seen below.