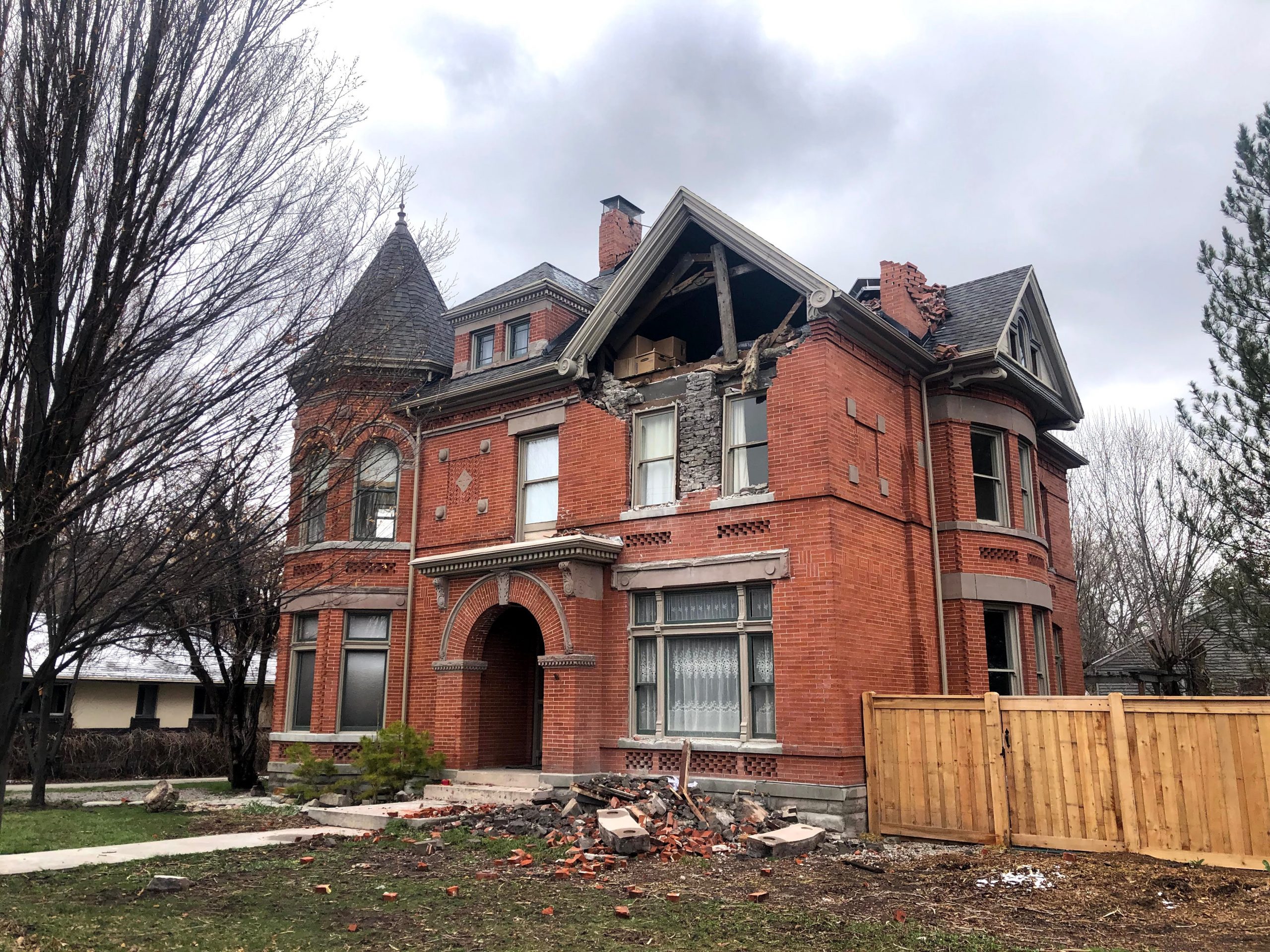 Once home to an 1892 Victorian brick Sears Mansion that was destroyed during the March 2020 earthquake, a third-acre lot in Salt Lake City’s Liberty Wells neighborhood would make way for four-story townhomes under preliminary plans filed with the city.

In order for the new homes to be built, developers would need the Planning Commission and City Council to agree to rezone the property at 1902 S. 400 E., from single-family with minimum 0.11-acre lots to RMF-45 moderate/high-density zoning.

The request sets up the latest example of moderate density coming to one of the capital’s historic streetcar suburbs, once revered for its distance from Downtown, now for its proximity to it.

The couple that had recently purchased the historic mansion tried to revive it after it was significantly damaged during the earthquake, then considered splitting the lot and building a new home on one parcel.

Ultimately the 5.7 quake and ensuing aftershocks rendered the home irreparable, and it was demolished, becoming the neighborhood’s most tragic loss of history from the earthquake.

The lot and location made it a target for numerous developers looking for relatively affordable infill space anywhere in Salt Lake City to continue the ongoing housing boom.

Much is unknown for the preliminary plans, but what is known thus far is likely to rouse the neighborhood south of Central City, which is primarily single-family homes with little commercial space and multi-family units that are typically small-scale and sparse.

Plans for the property

There are no renderings available that would shed light on the exterior design of the building. But documents filed with the rezoning request give some insight into what might come to the vacant lot.

It’s early in the process, and the developer made clear the concept could change based on feedback from the neighborhood and city planners.

“Developer proposes to subdivide and construct 8 tasteful townhomes on the Property for sale and use as a multifamily residential subdivision,” filing documents say. “Each townhome will have 4 bedrooms, 2 baths with a double car garage. There will be no on-street parking.”

Each building would be four stories and 42 feet tall, or 14 feet taller than what’s already allowed in R-1-5000 zoning that’s common in the area. The height includes a ground-floor that would be dedicated exclusively to a two-car parking garage in each unit, or 25% of each home, plus a shared driveway for entry and exit of 400 East.

That height would rise above St. Joseph Villa, the three-story nursing home and rehab facility across the street.

While no square footage is included in the rezone request, the living space would be large enough for families, and likely larger than many homes in the area.

Representatives for the developers said they’re willing to work with city planners to alter the concept and follow more of a form-based code over final designs.

“IE, ensuring that the form of a building fits into the neighborhood surrounding it, rather than focusing regulation on the specific use of that building as traditional zoning code requires,” they wrote.

That could include changes in “height, depth and general shape of the Project to best utilize the space on the property and ensure that the residential neighborhood character is preserved and enhanced.”

Initially, they’ve asked for RMF-45. At most, that zone would allow 13 units on the property without other exceptions, so the developer is choosing to go bigger with living space and provide copious off-street parking.

The developers say their units would be more affordable than what’s available in the area, where the median sales price is near $400,000. Larger units sell for much more.

RMF requires big setbacks that would match the large setbacks of our single-family homes in Liberty Wells, whose boundaries run from 2100 South to 900 South, State Street to 700 East and overlap with Central City west of Liberty Park.

FB-UN2 is another zoning type they could have gone for, but that’s more of an urban zoning type with no off-street parking requirement, higher densities and lower building setbacks.

While the neighborhood would likely welcome the idea of a sort of more robust “urban village” with shops and dining within its boundaries, this isn’t the logical space for it.

The orientation of the preliminary drawings show the townhomes running east-west and fronting Westminster, with no apparent activation along 400 East.

Those types of design choices could change during work with the city and neighborhood.