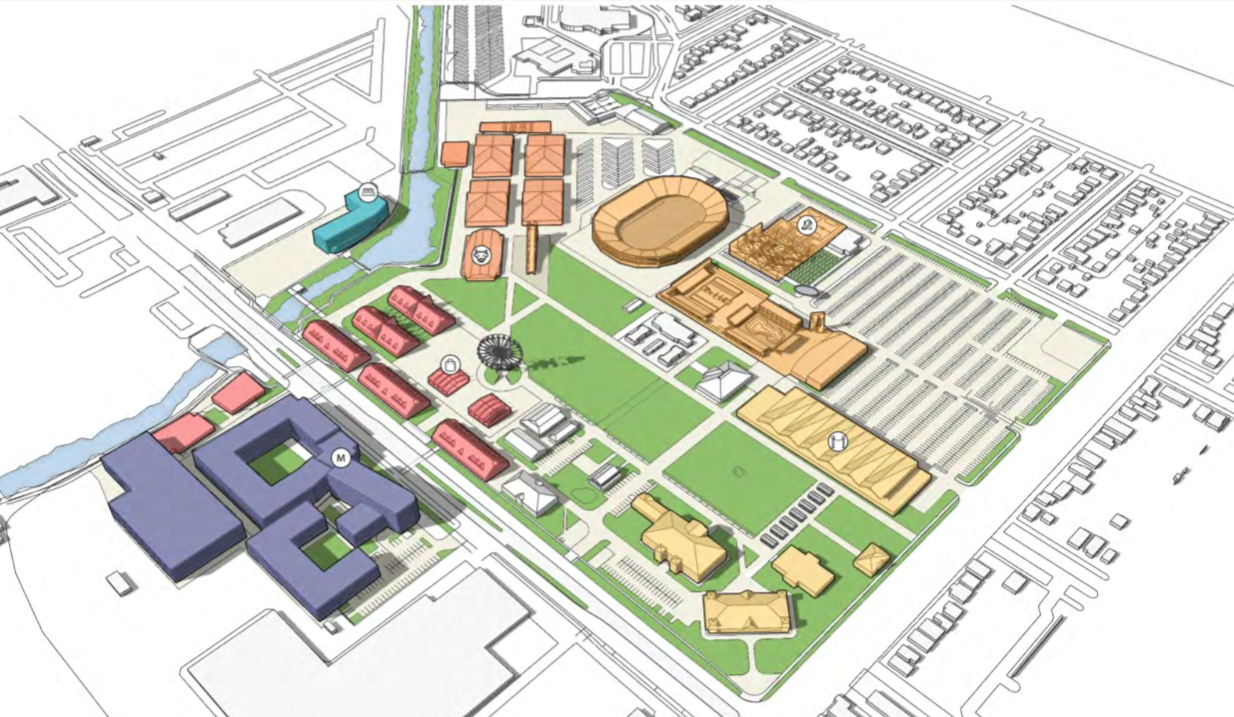 The development future of the North Temple corridor depends in an outsized way on its two largest landholders – Pacificorp (Rocky Mountain Power) and the Utah State Fairpark.

Rocky Mountain Power has chosen their master developer, a Pacificorp vice president told the State Fairpark Board last month, and is currently in contract negotiations with the firm.

Meanwhile, the Fairpark Board is kicking into full gear its master planning process for a $155 million makeover. It includes a diversification of the Fairpark’s functions as well as acquiring land for expansion from adjacent county and city parks.

The State Fairpark’s master planning and market analysis process is being conducted by locals EDA architects and their economic development partners RCLCo. At the Fairpark Board meeting on July 15, EDA representative Jonathan Hickerson noted that the goal of the master plan is “to improve the Fairpark as an asset to the community and find options for the Fairpark to be more financially sustainable.”

To comment on the future of the Fairpark, take this survey.

The planners, working with the existing historically landmarked structures on the property (only one, the Wasatch Building, is to be moved), have re-organized the site into activity zones.

The Historic Core, location of the existing historic barns along North Temple, will house a public market and related activities.

The new public International Market, originally slated to open this summer, has been postponed until fall. The Sheep Barn has recently been rented to Spin scooters on a three to five year lease, who will use it 11 months of the year for offices and scooter storage.

In addition, a 100 ft tall Ferris wheel, priced at just over $1.7 million, is meant to draw visitors into this area of the park.

To the north, an Adventure Play area is to house an expanded skate park and stadium, developed with corporate partner Vans. A ropes course or similar activity, replaced pickle-ball and/or soccer courts, and “a garden or gardens” would also be sited there, according to EDA’s Hickerson.

In the park’s northwest quadrant, the “Animal Experience” functions will be concentrated. New barns for livestock along the Jordan River, as well as new horse stables and a maintenance barn would cut into Constitution Park, site of Northwest Recreation Center, owned and operated by Salt Lake County.

Hickerson told the Board that there are several scenarios for “taking over” between three and six acres of land from the southern part of Constitution Park. Currently within the smallest proposed incursion (3 acres), there is access to the Jordan River Parkway (a desire path), a youth soccer field, and two soccer (futsal) courts.

A more expansive scenario is to add an additional three acres along the Jordan River, in order to park heavy trucks and trailers during the fair. That area would have the capacity for 69 trailers and likely be reinforced turf parking, Hickerson stated.

The plan was presented as if the three acres needed for the new horse stable and maintenance building are non-negotiable. This area is “the lynchpin” to moving forward, according to EDA. Hickerson emphasized to the Board that “the most critical thing we are working on is the acquisition of this land.”

In the southeast sector of the park, the construction of a new 30,00-50,000 sf exposition hall is to anchor the Conference & Expo portion of the park, building on its current assets for holding meetings and events.

The state Driver’s License Services building will need to be removed, which is also of urgent importance in progressing the plan, Hickerson insisted.

Planners are also proposing an expansion of the grassy mall as an east-west axis of the new park.

In early renditions of the master plan, residential development was slated to take place south of North Temple, on the Jordan River. The “White Ballfield,” the unpaved vacant lot (used for parking during the month of the fair) is likely the site of a large mixed-use project.

EDA told the Fairpark Board that given Pacificorp’s updated sequencing of the Rocky Mountain Power property, mixed-use development may be slower than hoped. RMP has indicated that phase one of their development will be a new office building.

RCLCo’s market analysis returned results indicating that before the RMP properties are functioning as mixed-use, the only economically viable option at the White Ballfield is affordable housing.

There seems to be a strong Board preference for a mixed-use development in the southwest portion of the Fairpark, which would include a hotel on Parking Lot A, located on the west side of the river north of N. Temple.

Given the slow-down on developing White Ballfield, Hickerson made a case for building a multi-family building on the current parking lot on 1000 West, along with four levels of structured parking.

“If we want to do something in the near term, then the place to do that is in this parking area,” Hickerson asserted.

Hickerson sees “Strengthening the core and the connection to the neighborhood here by creating some density and giving back a demonstration garden or gardens where we could start to talk about water usage and things that are appropriate agriculturally for this area.”

Craig Vickers, of Civitas based in Denver, noted that they are “expecting a net gain in parking creating synergy capacity” for the park. How many structures that will require remains unclear, as much of the current surface parking is marked for development.

With the challenges of handling peak parking and traffic demand during large events, as well as potential development coming to the Fairpark’s large surface parking lot that borders 10th West, planners are suggesting an additional car entrance to the property. They envisage a new car-only entrance (north of the current one), and an additional pedestrian-freight loading opening.

They believe they have road design solutions that will decrease the amount of stacking cars as well as move more cars thru with a wider opening.

Doubts of whether that fits with the Transportation Division’s proposal to road diet the street from N. Temple to 600 North, has spun the Fairpark Board into a tizzy.

Board member Jennifer Seelig told us that the Fairpark’s Board and Executive Director Larry Mullenax were not informed by the city of the project. “My concern with the proposed restriping that we found about it at the Fair; meaning, we found out about it, instead of being contacted about it.”

Seelig, who was recently Mayor Jackie Biskupski’s Director of Community Relations and represented the area in the state House of Representatives, noted the neighborhood’s historic problems with traffic, parking, ingress and egress during the fair.

“Look at the pedestrian crosswalk where our entrance is: it’s not safe, that’s not good.”

Seelig is pitching a new community process revolving around the 10th West redesign and the Fairpark plan.

“There’s the convergence of new people moving in, long-time residents, historical + cultural aspects of the neighborhood, and the Fairpark is a part of all of this. There is an opportunity to address all of the issues, and so far that hasn’t happened,” she said in a phone interview.

As far as the 10th West restriping goes, which would add bike lanes and drop a car lane in each direction, the board’s intention is “to slow the project down or stop it entirely,” Fairpark CEO Larry Mullinax stated.

Mullinax reported that he and SLC Transportation Director Jon Larsen would be scheduling a meeting “in the next couple of days.” But “I sense on their part a hesitancy to make any changes at all.”

Other board members indicated during the July meeting their willingness to flex their power on city government.

“I will certainly make a lot of noise with the governor’s office and legislative leadership if we can’t come to a resolution,” a board member predicted, unidentified on the audio recording.

“If we have to go talk to some other folks, their supervisors, including the Mayor, I guess we’re prepared to do that” another board member claimed at the end of the discussion.

Whether that will be part of the “open and robust process [that] can work for everybody,” as Board Member Seelig desires, is to be seen.

Editor’s note: This story has been updated. A previous version misidentified EDA principal Greg Brooks as working on the master plan. The correct person is Craig Vickers, from Civitas Landscape Architecture and Urban Design.