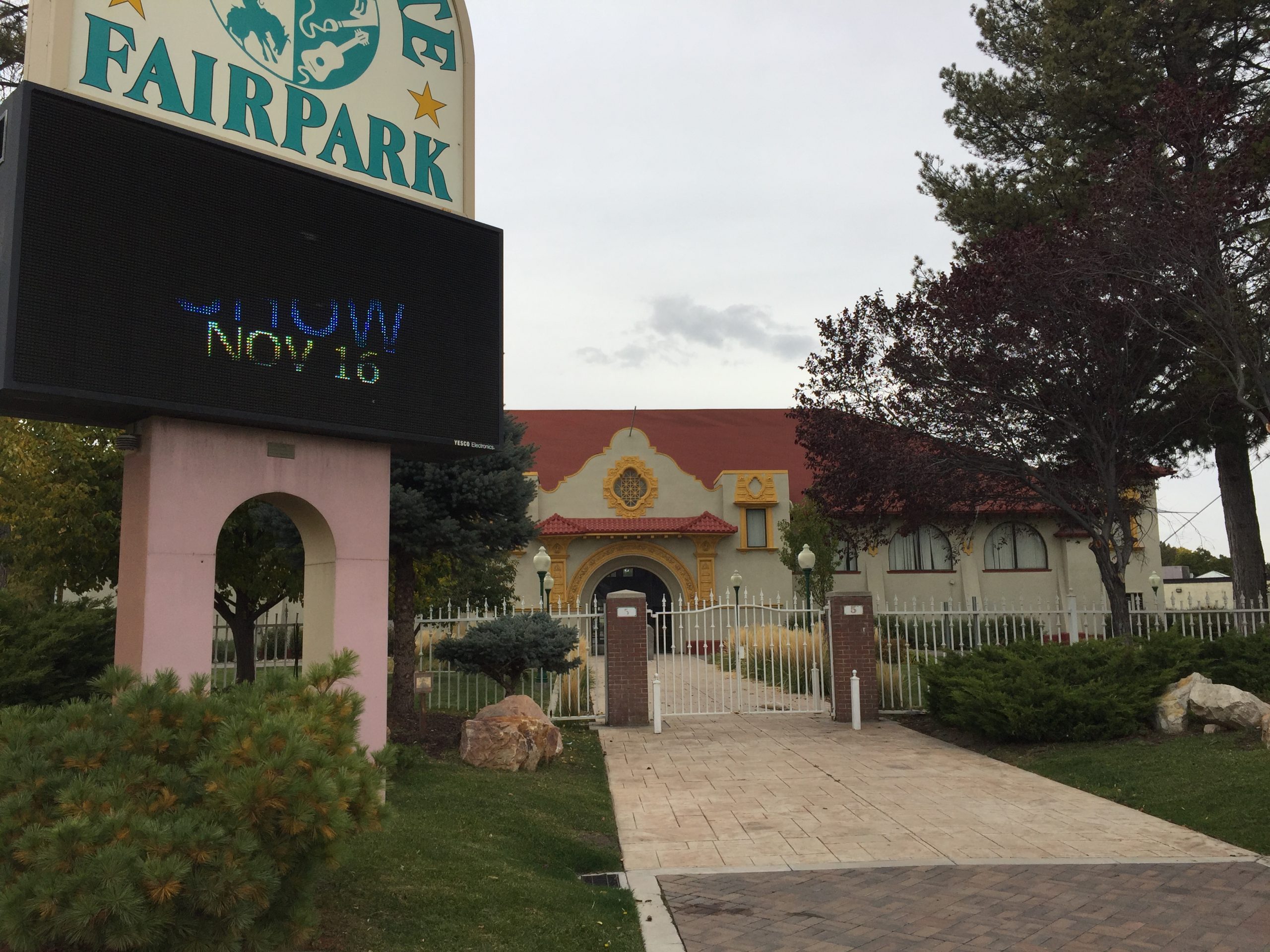 Competition between the west side and Downtown for a full-time, year-round public market heated up last week.

The Utah State Fairpark announced that they will run a May-to-August, four-days-a-week, food-centered market in and around their historic livestock barns facing the Fairpark TRAX station on North Temple.

The park’s existing facilities, including the seismically-retrofitted barns, bathrooms, and kitchens are ready for adaptive reuses like a public market, Fairpark leadership contends.

The Fairpark’s official address is 155 North 1000 West – the entrance to its main parking lot. The facility harbors over 15 acres of surface parking lots, a land use that has hamstrung the area’s development for decades.

Unfortunately for many potential users, the Fairpark’s frontage on North Temple, a transit corridor, is largely inaccessible – despite a TRAX station at 1150 West, on the Fairpark’s sizable southern edge.

One of the biggest challenges of a Fairpark public market, says Fairpark Corporation Executive Director Larry Mullenax, is to create a grand opening on its southern edge at the Fairpark TRAX station on the green line. That entrance would open directly to its market site between Barns 8 and 9.

The Fairpark plans a permanent, year-round venue for business incubation and development, emphasizing food (prepared and fresh) that will attract new visitors, nearby residents, and the hundreds of people who come to the Fairpark every day.

In addition to a food hall, the “Fairpark International Market” intends to open its doors to vendors of crafts, art, and emerging food production and manufacturing technology.

The Salt Lake City Council sparked the Fairpark market news reports last week, issuing a joint resolution with the Mayor Erin Mendenhall that ambiguously endorsed the Fairpark public market. It cited the benefits of a Fairpark market for west side neighborhoods, residents, and future development along North Temple.

What about the Downtown public market?

It’s been long assumed in Salt Lake City government and business circles that the Downtown Alliance and their spin-off nonprofit Urban Food Connections of Utah (UFCU) would be the purveyors of the city’s full-time, year-round public market.

Since 1992 the Downtown Alliance (DTA) has run the highly successful Saturday Downtown Farmers Market at Pioneer Park. That venture has grown into a Tuesday market during the summer and a Winter Market at the Rio Grande depot.

For years the DTA has had their hopes pinned on the Rio Grande depot as the site for their permanent, full-time public market, but the building is owned by the state of Utah and currently occupied by the state’s Department of Heritage & Arts.

Downtown Alliance’s director Dee Brewer told us that they “remain committed to creating a full-time farmers market in the Rio Grande neighborhood. It is fair to say 2020 has disrupted our trajectory.”

Brewer touts their success during Covid. “While we limited the number of vendors (to achieve physically distanced shopping), many of those vendors’ sales exceeded previous years’ sales volume.” That was “beyond expectations,” he noted.

Still focused on the Depot site, the Downtown Alliance remains hopeful that the Rio Grande building and western terrace along 400 West will become available from the state. Yet “we are not pursuing specific legislative action in the 2021 session.”

Their plan b is to find another location in the Depot District if the Rio Grande depot doesn’t work out. Brewer expressed to us that “We love the Rio Grande station location for a market; other state and local policy makers like the idea too. But the future of that building depends on decisions beyond our control. And we think there are other options for creating a market in the area.”

The consultant’s report: will a Fairpark market work?

Key to the Fairpark project is the 2019 consultant’s report on the feasibility of a public market at the 65-acre site at 155 North 1000 West, commissioned by the city’s Redevelopment Agency. The RDA’’s board of directors has been a vehicle for forces promoting a public market at the Fairpark, led by west side councilmen James Rogers (District 1) and Andrew Johnston (District 2).

DTA’s Brewer sees little if any competition between the markets, stating that “The opportunities that the consultant identified at the Fair Park’s location…are distinct from UFCU operations.”

Hired by the RDA, locals CRSA Architects, along with partners Project for Public Spaces and Zions Public Finance Inc, reported that a Fairpark public market is highly feasible, especially if it is food-oriented and open when other markets aren’t – like nights and Sundays.

The study identified a “barn alley” along North Temple that could stage an indoor-outdoor public market. One the Fairpark’s advantages over the proposed Downtown locations is that the Fairpark already has multiple commercial kitchens available, as well as restrooms.

Estimates of a new facility, according to previous studies commissioned by the RDA focused on the Depot District, are in the neighborhood of $30 million.

Since being founded in 1902, the Fairpark has always had a mission to foster and showcase developing technologies of the local economy, contends Fairpark director Mullenax.

“The annual state fair was the place where you went to see emerging technologies,” Mullenax told us. “It connected people to agriculture and the latest innovations in manufacturing. Very few people could travel to New York or Chicago to get exposed to the latest inventions, and the state fair served that local purpose.”

According to the 2019 study, the number of nearby households, their income and education levels, among other measures, all point to the Fairpark location as having even more potential than comparable, successful public market ventures in Fort Worth, TX and Allentown, PA that the consultants studied.

Whether the city can support two year-round, full-time public markets will ultimately be decided by size and dynamism of the Salt Lake market.

The Fairpark’s development potential and plan

As an independent non-profit corporation chartered by Utah state government, the Fairpark is responsible to balance its own budget. Crucial for revenue and development potential, it has taxing and bonding authority, including the ability to engage in development partnerships with private entities.

The Fairpark’s development potential is massive, even if only measured by the activation of its North Temple frontage. But the 65-acre park also borders 1000 West and 300 North, affecting tens of acres and hundreds of adjacent properties.

Some of those properties are owned by the state, specifically the White Ballfield, at the Jordan River and North Temple, immediately south of the Fairpark; and “Parking Lot A,” just across the river to the west, also on North Temple and vacant most of the year (adjacent to the business Ski Trucks).

They are both part of the area included in the RFP for the Fairpark’s new master plan.

The Fairpark corporation will have a consultant on board in January, Mullenax told us. The goal: “Recreating a master plan that is more in line with where we’re headed as a corporation and to provide better service and more opportunity to the local community.”

Key for urbanists is the Fairpark’s sizable footprint on the North Temple transit corridor on Salt Lake City’s west side. Most of the city is currently defined by car-centrism with limited rail access. The North Temple Airport Green Line holds a promise for a new development pattern.

Mullenax, unprompted, brought up the future development of the Rocky Mountain Power property to the south and across the river to the west.

“We have the chance to create a project that blends plans together that create a bigger benefit to the community.” Mullenax refers to projects like the renowned Fort Worth Stockyards redevelopment, citing it as a public – private partnership that had multiplier effects for the local community.

When asked about replacing parking at the White Ballfield and Lot A, Mullinax offered, “The master plan will include a solution for parking. In addition we will provide incentives encouraging visitors to use public transportation, ride share, and E-mobility devices.”

Mullenax promises that the new master plan, which will include past visions for the park as well as extensive public engagement, will be completed in less than a year, by late summer 2021.

He hopes it will include a convention center of 30,000-50,000 sf, as well as improved Jordan River access to include ADA- compliant ramps and the potential for programming along the Park’s river frontage.

Ultimately, Mullenax seems to recognize the challenge of starting a year-round daily public market from scratch.

“it has to be a unique experience for all visitors, and unique every time you visit it,” he says.