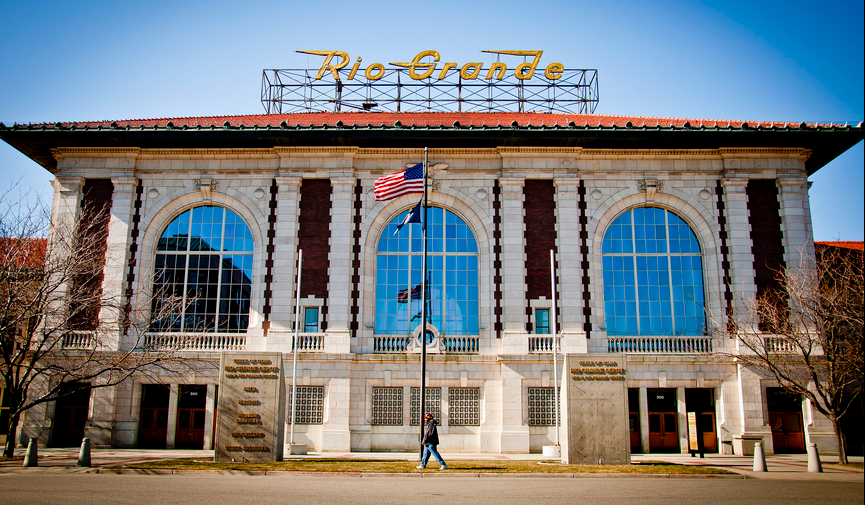 After over 12 years of plans, studies, and now political challenges, a 7-day-a-week, year-round Downtown public market may be getting traction among key players in the state.

The 501(c)(3) Downtown Alliance, which has been running the Downtown Farmers Market in Pioneer Park for 28 years, is hoping that this will be their year at the State Legislature.

They are angling for the Rio Grande Depot to be their permanent home. The historic train station is currently owned by the State of Utah and occupied by the Department of Heritage & Arts.

State leaders may fund a new facility that would accommodate the department, its gallery of local artists, and the state’s art collection.

Programmable space inside the depot is 4800 SF, including its balcony. With the “Portico” to the west, the operators would have 7420 SF to work with.

This past Saturday the Downtown Alliance and its affiliate Urban Food Connections of Utah opened their seventh annual Winter Market inside the Rio Grande Depot at 300 South and Rio Grande Street.

Meanwhile, staff at the City’s Redevelopment Agency will soon present to the Board a West side addition to the Downtown public market.

City councilman James Rogers (District 1) pushed for the Fairpark public market feasibility study, and it was supported by a majority of the RDA Board. Neither Rogers nor the West side’s other representative on the city council, Andrew Johnston (District 2), responded to BSL’s request for comment.

RDA staff will report back to the Board in December that a public market at the Fairpark is feasible. There is sufficient community interest, economic feasibility, and appropriate space at the park.

Specifically, the consultants – made up of CSRA Architects, the Project for Public Spaces, and Zions Public Finance – recommend using the space in and around the barns along North Temple at the south end of the Fairpark.

Staff reported last week to the Redevelopment Advisory Committee (RAC) that there is space in the city for two public markets.

Project Manager Cara Lindsley told the committee that the study concludes that two markets can simultaneously exist. They would need different operators and a “slightly different focus.”

An international and a night market were unique ideas for the Fairpark that came out of the consultants’ extensive public outreach, reported RDA staff.

The Executive Director of the Downtown Farmers Market, Alison Einerson, has no intentions of waiting for the Fairpark initiative.

She, along with Downtown Alliance director Dee Brewer, told Building Salt Lake that the Pioneer Park neighborhood and the Rio Grande Depot are ideal locations to continue to house the “catalytic” farmers market.

Einerson and Brewer emphasized that nothing is a done deal and they appreciate their “partners in the state Department of Heritage & Arts.”

Yet they spoke easily about what a permanent, 7-day-a-week public market could do for the Rio Grande-Pioneer Park neighborhood.

She added that currently the building serves as a barrier to neighborhood mobility. Indeed, it seems impossible to get from Pioneer Park on the east, to the RDA’s Station Center development and the Intermodal Hub to the west of the depot.

“This location is within a quarter mile of the freeways, and people have been coming to the market in Pioneer Park, a block away, for years,” Brewer stated. “The Fairpark is a fantastic neighborhood. But it’s not supposed to have the traffic that a daily market would bring or be an entry to Downtown.”

A new building for the public market has been studied as part of the RDA’s Station Center initiative. Those estimates ran upwards of $30 million nearly two years ago.

Einerson’s “dream” is to open doors to a year-round, Rio-Grande-based market in 2023.

That’s going to take major action from the state legislature, an engineering-level study of needed upgrades to the Rio Grande building, and a successful fund-raising campaign for those upgrades.

Whether the Salt Lake City RDA will be one of those funding partners is yet to be determined.

Editor’s note: In a previous version of this article, the estimated cost of Phase 3 of the Fairpark market was stated at “upwards of 10 million.” The cost of that phase was left un-estimated in the consultants’ report.