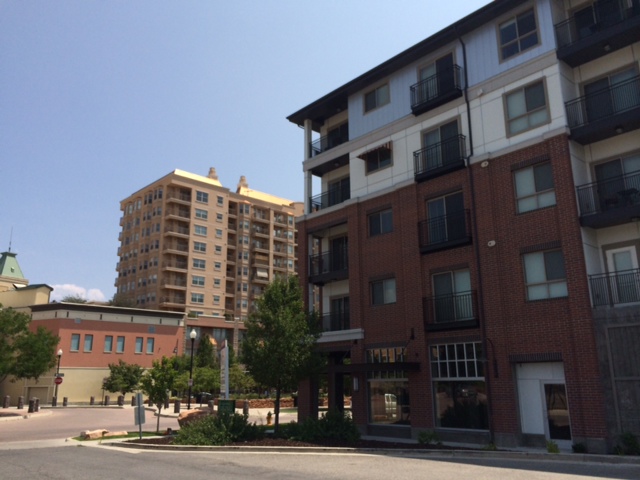 The Depot District in downtown Salt Lake City (formerly known as the Gateway District) is no stranger to common urban problems such as petty crime, homelessness and drug use.  The district makes up what was previously an industrial rail corridor on the west side of downtown from 100 South to 400 South and from 200 West to 600 West.

The public perception of the Depot District, referred to by the Downtown Alliance as “a challenged neighborhood” in its 2014 State of Downtown report,  has long been focused around the area’s large homeless population and drug use.  This Spring a coalition of area residents and local businesses called  for a police precinct near the city’s Pioneer Park, a large city park at 300 South and 400 West, where most of the area’s criminal activity occurs.

The Gateway Shopping Center continues to survive despite losing key retail stores that moved to the City Creek Center when that shopping center opened in 2012.

The opening of the North Temple Frontrunner and Green line TRAX stations in 2013 added yet another key transit corridor to an area that now includes two commuter rail stations, an Amtrak station and five TRAX stations.  The district’s abundance of mass transit makes the neighborhood easily accessible to the entire Salt Lake region..

Two hotels are under construction at 100 South and 300 West, next to Energy Solutions Arena and The Gateway.

The five-story Liberty Gateway Apartments, just north of 100 South and 500 West opened this past Spring.  The 160-unit, Liberty apartments add needed density behind The Gateway and help make the well-landscaped park, in the median along 500 West, feel like a true urban park.

Less than a block away from Liberty Gateway is the site for the planned Alta Gateway apartments.  The project is planned for the corner of 100 South and 500 West and will be four-floors and consist of 264 residential units.

But even around the park things are improving.  The expansion of the popular Downtown Farmer’s Market (held every summer at Pioneer Park) to include the bi-weekly Winter Market at the historic Rio Grande train depot has helped make the area around the park a year around destination.  The Twilight Summer Concert Series brings thousands of people to the park Thursdays in July and August.

ClearWater homes has finished the 82-unit Broadway Park Lofts across the street from Pioneer Park and plans to convert the former Westgate Business Center at 200 South and 300 West into residential units called the Westgate Lofts.

There are reasons to be optimistic about the neighborhood, crime is actually dropping around Pioneer Park and will likely continue to drop.  The reality is that as more residents and businesses move to the neighborhood, many of the neighborhood’s characteristics that attracted crime will be diminished.

The problems that Depot District faces are common for inner-city neighborhoods and should not be a deterrent to development.  Increased police presence in the area will help reduce crime, but there will always be homelessness in a large city.   The fact that the Depot District continues to grow despite its public perception shows that there are people in the Salt Lake area that desire real urban living in a walkable community with easy access to transit.   The pressure to “clean up” the neighborhood is a sign that Salt Lake is growing and like other large U.S. cities, previously undesirable neighborhoods are becoming desirable again.

Video of the Master Plan for the Depot District: