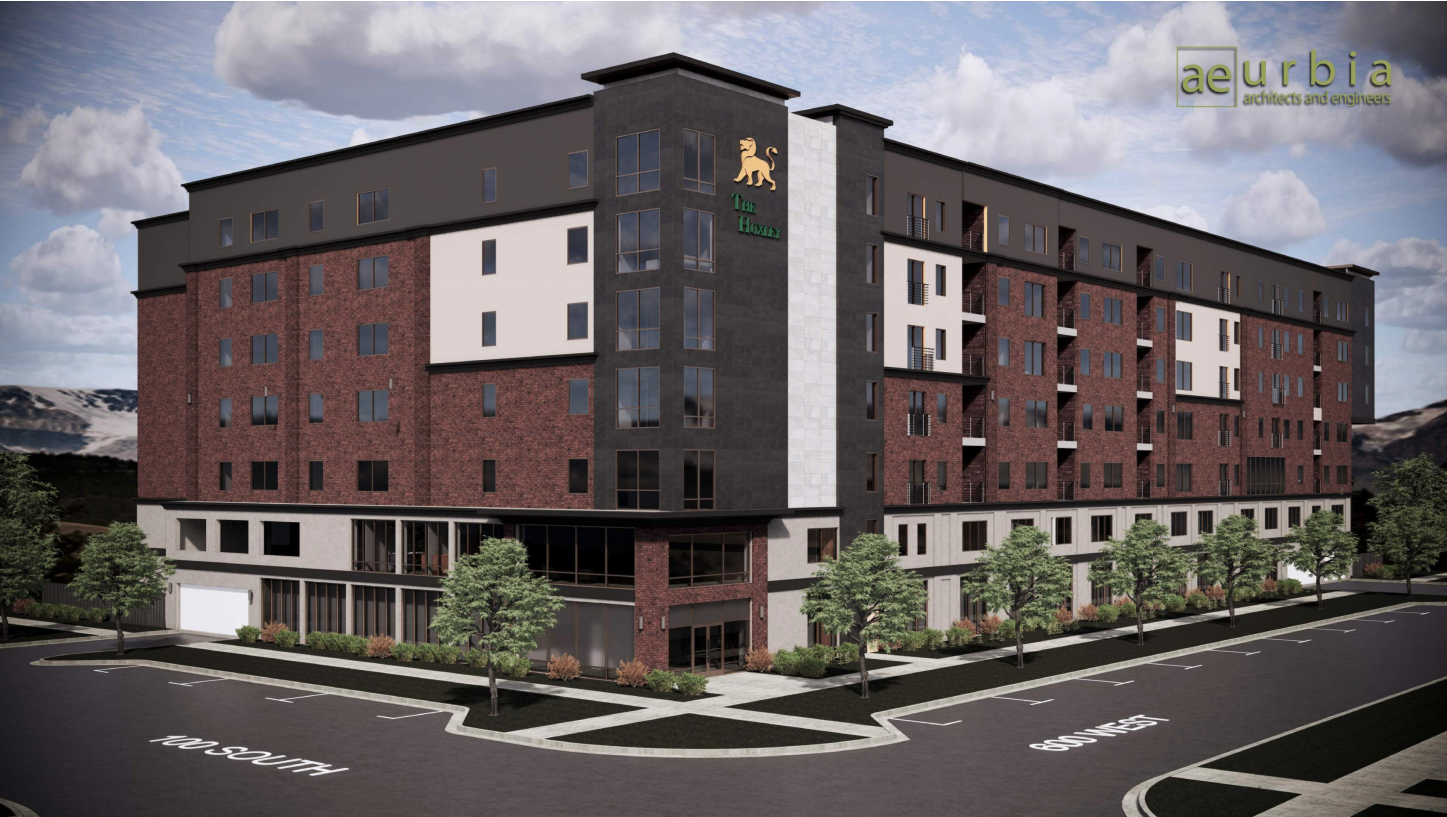 Developers have submitted plans for their single-use residential building in the city’s Depot District on the quickly developing west side of Downtown Salt Lake City.

The latest rendition of the Huxley Apartments has been updated since we wrote about the proposal earlier this year. The project would now bring 218 new residences in a 75-foot, seven-story building on about an acre at 600 West 74 South.

The project would displace two duplexes, a warehouse and a single-family home in what the developers dubbed a “rundown” portion of the city.

The building’s addition would bring more life to 600 West, in the back-end of the Gateway and close enough to revitalized sections of Downtown that will begin coming to life within the next two years.

That added life, perhaps 300 or more people in addition to thousands more newly added units, will be all that the Huxley will add to the city. And it appears to be the developers’ main selling point.

Indeed, the transformation that will happen in the coming years will have a lasting impact on the capital city. Downtown is poised to shift from a place primarily of work and entertainment into the most populous neighborhood in Salt Lake City.

Across the street, CW Urban recently wrapped up the Beverly, 48 new luxury units. Centro Civico offers space for seniors to live Downtown. The Greenprint Gateway, Central Station West, and a frenzy of projects along 200 South will inject hundreds more people within about a half-mile radius near 600 West.

These types of projects will help change the Depot from a dead zone visited primarily to party at the Sun Trapp or garden at the Wasatch Community Gardens’ Green Phoenix farm into one filled with residents.

But so far few projects have offered any reason for non-residents to head west of the Gateway in the future.

While that’s by no means unique in the city, it is becoming crucial in our view to take a deeper look at what buildings offer the community aside from the life and energy brought by the people living in the new buildings.

As is standard for a new luxury apartment building, the Huxley’s developers made sure to include private amenities for residents living in the building.

At 75 feet, the building will hit the maximum height allowed outright in the Gateway Mixed-Use zone. The developers could have added another story, building up to 90 feet, had they included about 40 affordable homes.

They could have also built up to 120 feet and asked for permission through the design review process they’re already going through. In January, the developers had planned to build an eight story building at 85 feet.

Instead, the ground floor will be parking that’s disguised by windows and a small lobby on the corner.

The developers are including fewer than one parking space per residence. The GMU zone calls for 0.5 parking spaces per unit. Though the existing ordinance is toothless thanks to another carve-out that allows builders to double the parking minimums through what is known as transportation demand management.

That ordinance considers it a major progressive transportation solution worthy of doubling the storage space for residents’ private cars if the developer includes enough bike parking and on-site gym.

In this case, it’s space for six bikes to be stored indoors. That’s what will be provided for the 300 people living in the building in a neighborhood that is considered a “biker’s paradise” for its deep integration into the city’s bike network and easy, flat access to the city in any direction.

The developers will include 168 off-street car parking stalls on two levels that account for nearly 30% of the entire building. (Space for people to live is in the other 70% of the building.)

They also say space on the public streets surrounding the property could store 17 more private vehicles.

“A minimum of 40% of the street-level facades are storefront display windows,” the developers wrote in the application.

But there will be no storefront, and pedestrians passing by will be engaged only superficially as they pass the building’s 290-foot-long facade along 600 West.