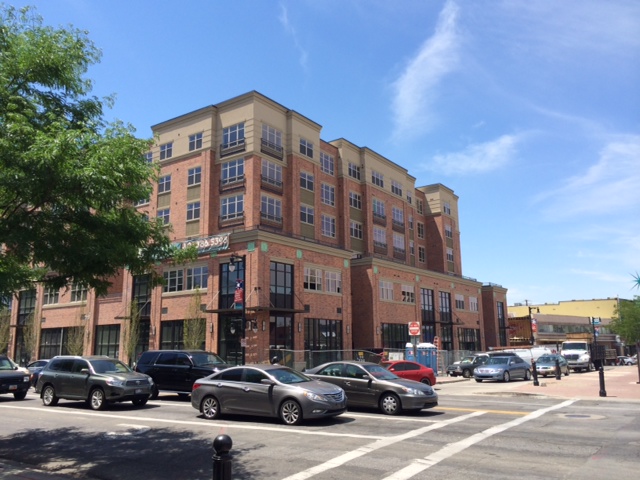 There was a time when the future of the Sugar House neighborhood in Salt Lake looked grim.  Like many cities Salt Lake experienced a development boom in 2007 with signature projects like 222 South Main and the City Creek Center under construction.   During that time the city saw many proposals for large mixed-use projects from the Marmalade neighborhood to Sugar House.   Then the Great Recession hit and many projects lost their financing.

Developer Craig Mecham demolished the most popular block in Sugar House to build what would be the tall mixed-used project in front of Monument Plaza.  After the economic crash, Mecham lost his financing for the project leaving a large hole in the ground became what was known as the “Sugar Hole.”

Monument Plaza at the corner of 2100 South and Highland Drive, the heart of Sugar House, had welcomed visitors to Sugar House and the eclectic mix of thrift and niche stores, cafes and restaurants for decades.  The “Sugar Hole” became a visual reminder of the economic downturn and of the many projects that never materialized.

As the economy has rebounded so has Sugar House.   The neighborhood is growing even faster than before the financial crisis hit.  In 2011, Mechmam secured some extra financing through the Salt Lake Redevelopment Agency (RDA) needed to begin construction.   A year later construction began on the S Line, Salt Lake’s first streetcar that connects Sugar House to all three TRAX Lines.

There are currently three large residential or mixed-used projects under construction on and next to the block where the “Sugar Hole” once was.

Mecham’s project, called Sugar House Crossing, is nearing completion.   Located on the same block is the redevelopment of the former Granite Furniture store that will be built in two phases with the first phase already finished.

Across the street from the old Granite Furniture store is Liberty Village a large residential project being developed by Cowboy Partners.

Liberty Village is 5-floors with 171 residential units, with 136 units available at market rate and the other 35 of units will be income restricted.

Both projects are less than a block away from the S Line streetcar which will eventually continue to Highland drive and 2100 South and later up 1100 East.  Sugar House Crossing and Liberty Village will bring hundreds of news residents to an already vibrant neighborhood.  Sugar House has not only rebounded, but is stronger than it has been in years and with all the current projects under construction or proposed in the area, its future is again looking bright.