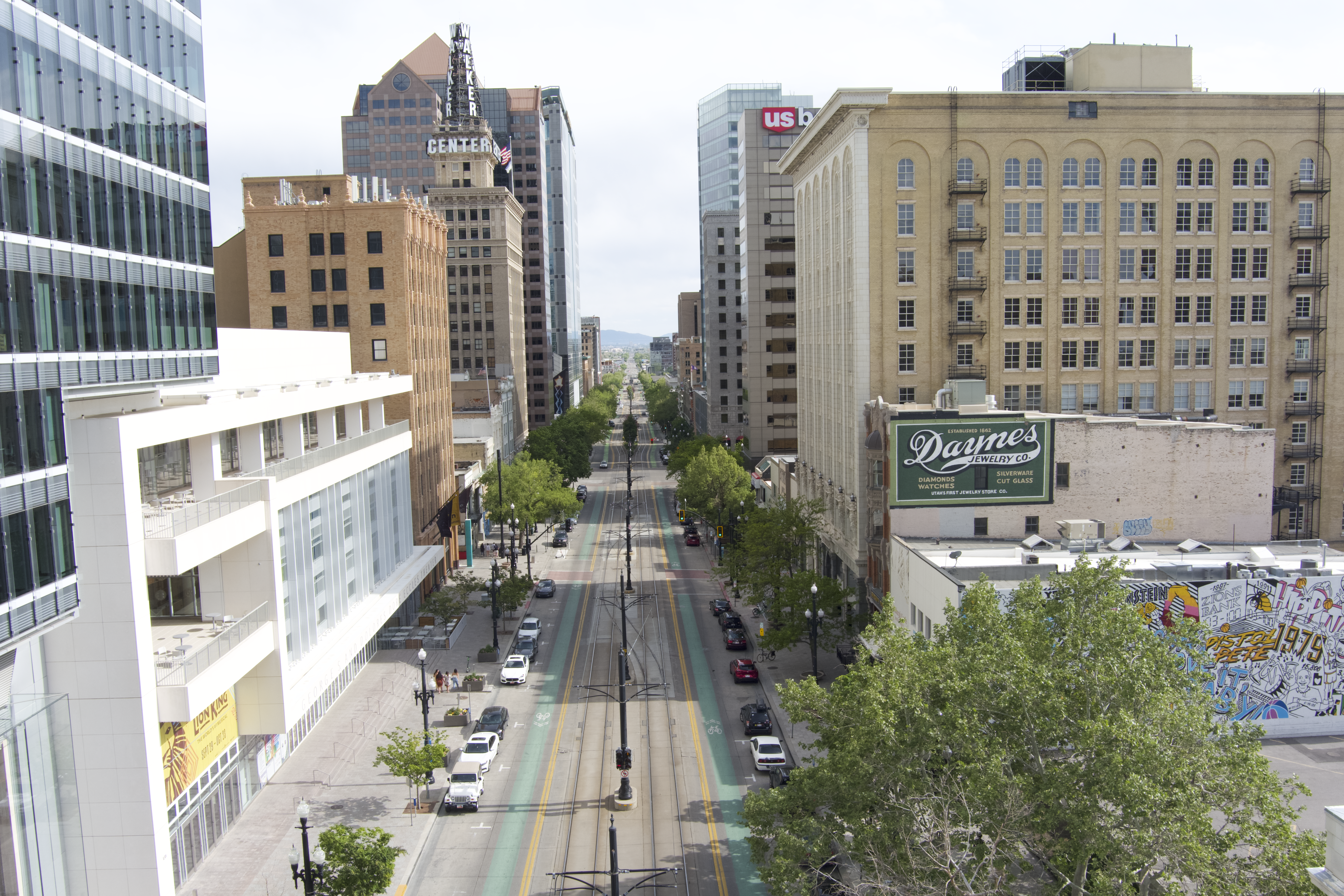 As the number of people living in Downtown Salt Lake City continues to grow by the thousands, city leaders seem serious about continuing their summer weekend “Open Streets” experiment – and possibly making permanent a Main Street closed to cars in the city’s center between S Temple and 400 S.

The Downtown Alliance (DTA), a non-profit charged with representing business and property owners in the Central Business District, is poised to return the program that temporarily closes Main St to cars on summer weekends for its fourth year this summer.

In addition to carrying out this summer’s Open Streets Friday-Sunday on Main, the DTA is also putting its weight behind a vision to permanently “pedestrianize this public space: close it to cars, and create outdoor spaces for dining, strolling, gathering, and performing.”

A pedestrian mall on upper Main in SLC – is it really in the works this time?

The business case for closing streets to cars

Jessica Thesing, DTA’s Urban Affairs Director, told the audience at the Alliance’s State of Downtown event May 12 that the vision for a “pedestrian promenade” has achieved “proof of concept” over the last three years of its existence.

The number of visitors and sales tax receipts are growing on Downtown’s Main St when it’s closed to cars – and those numbers are not outliers compared to other cities worldwide.

Removing cars from central city areas seems to be good for business – as the city first discovered when it saw sales along Broadway (300 S) after removing some parking and installing the city’s first protected bike lane.

The DTA hopes to run a third year of Open Streets this summer from “Memorial Day to Labor Day,” but is yet to fill funding gaps to run the program all summer, Thesing told us.

Meanwhile, the idea of permanent Main St pedestrianization seems to be getting significant traction at city hall. The Redevelopment Agency is proposing to fund a sizable study to plan the concept – to the tune of $300,000 – in this year’s budget.

Friday, Saturday, and Sunday, “Noon to Bar Close,” people will be able to use Main Street between S Temple and 400 S without worrying about being hit by cars.

That sort of safety and freedom on the street seems pretty attractive to people, according to numbers collected by the DTA.

The Alliance counted 550,000 visitors over just over three months last year that went to Main St when it was closed to cars.

Yet with a noon opening, the Main St promenade is likely to attract more people than just partiers.

Yet that comes at a significant cost each year – a nearly $500,000 fundraising goal not yet met by the Alliance to run the program all summer.

To avoid the nearly $.5 million required to close the street to cars on weekends for the summer, both the DTA and the city are looking for permanent solutions that will make the transition to a pedestrian-only street on Main a lot cheaper.

“People have been talking about this for Main Street for a long time,” Thesing emphasized.

Confirming that perspective, the city’s Transportation Director Jon Larsen didn’t flinch when we asked him about permanent Main St pedestrianization.

Asked about the barriers to closing the street to cars 24/7, Larsen was reassuring to advocates of the concept. He referred to foreign examples as well as domestic successes.

“What seems to work best in other cities is a hybrid approach, where businesses have freight and delivery access part of the business day, usually until noon.”

The street would be completely closed to cars the remainder of the day and night.

Larsen emphasized to us that banning cars is more of a decision for economic development than for transportation.

“I see this mainly as an economic development initiative with implications for transportation infrastructure.”

“It’s all about the businesses,” Larsen told us. “If they are benefiting, then it’s working for everyone, because it means that people are coming to the area.”